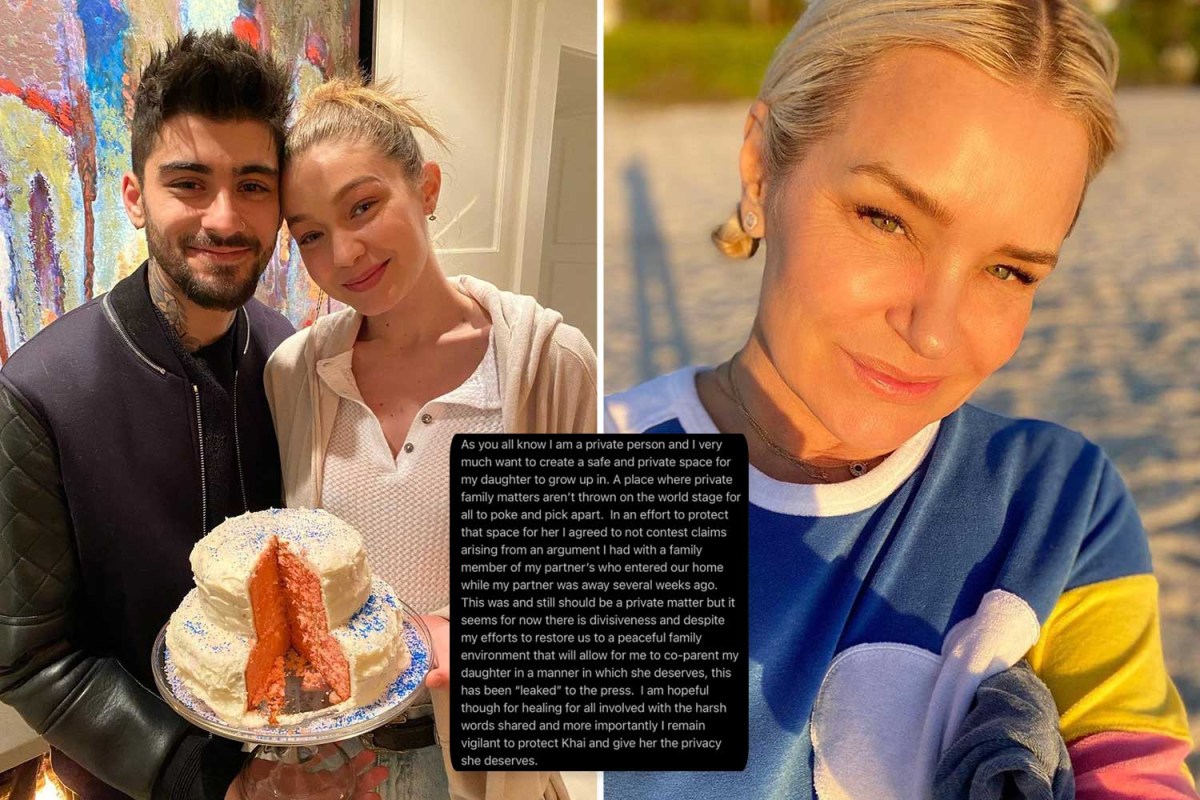 ZAYN Malik fans are convinced he has SPLIT with Gigi Hadid after claims he “struck” her mother Yolanda during an “argument” last week.

His Twitter followers noted that he had “dropped clues” in a statement released to fans on Thursday, in which he described Gigi, 26, as a “co-parent” to his daughter.

Former One Direction band member Zayn, 28, took to Twitter to detail that he’d had “an argument with a family member of his partner”.

It comes after Gigi’s mother Yolanda, 57, reportedly claimed Zayn “struck” her and is “seriously considering” filing a police report for the incident.

According to TMZ, the encounter happened last week at the family ranch in Pennsylvania – while Zayn suggested it happened at “their home”.

He took to Twitter to post a statement about the matter, indicating that it “is and still should be” a private family matter to protect his daughter, Khai, one.

Zayn wrote: “As you all know, I am a private person and I very much want to create a safe and private space for my daughter to grow up in.

“A place where private family matters aren’t thrown on the world stage for all to poke and pick apart.

“In an effort to protect that space for her I agreed to not contest claims arising from an argument I had with a family member of my partner’s who entered our home while my partner was away several weeks ago.”

He went on: “This was and still should be a private matter but it seems for now, there is divisiveness and despite my efforts to restore us to a peaceful family environment that will allow for me to co-parent my daughter in a manner in which she deserves, this has been ‘leaked’ to the press.

“I am hopeful though for healing for all involved with the harsh words shared and more importantly I remain vigilant to protect Khai and give her the privacy she deserves.”

But fans were quick to note of the tweet – which has already recieved hundreds-of-thousands of likes – that he referred to himself and Gigi as “co-parents”.

“He didn’t say directly he was the father, he said ‘coparent’,” one person noted, as a second chimed in: “Does this mean ZiGi broke up?”

“I believe him and Gigi are no longer together due to the fact he said ‘co-parent’,” a third speculated, as a fouth agreed: “Why else does Zayn say ‘co-parent’?”

“Zayn said co-parent? Are him and Gigi seperated?” one woman worried, as someone else penned: “Wait so are Gigi and Zayn broken up?”

Others tried to offer rational explation for the choice of words, noting that Zayn does appear to refer to model Gigi as “his partner”.

“Maybe it’s just to be legally accurate in case he needs to take it to court,” a fan said. “Officially they are not married, they co-parent.”

“Him saying ‘my partner’ still makes their status clearer,” a second agreed.

There have not been any publicly known problems between Yolanda and Zayn before this incident.

The Dutch supermodel was seen in New York City after the news broke but stayed tight-lipped the entire time she was photographed.

Neither Gigi or her sister, Bella Hadid, 25, have spoken out about the alleged assault – but have been vocal about their close relationship with their mother.

The couple welcomed their first child in September 2020 following years of an on-again, off-again relationship which began in 2015.

Just before they welcomed their daughter, the couple appeared to have not been together – as Gigi was dating The Bachelorette’s Tyler Cameron weeks before she announced her pregnancy.

Revealing their little girl’s arrival, the lovebirds posted an Instagram picture cradling Khai while the proud parents shared a kiss.

The blonde beauty, who had kept most of her pregnancy a secret from the world, wrote on the app: “Our girl joined us earth-side this weekend and she’s already changed our world. So in love,” the caption said.

She also shared a sweet photo of herself holding the newborn’s hand.

At the same time, Zayn posted a similar photo of his tattooed hand and wrote in the post: “Our baby girl is here, healthy & beautiful.

“To try put into words how I am feeling right now would be an impossible task. The love I feel for this tiny human is beyond my understanding.”

Yolanda also penned a heartwarming note to her first granddaughter, saying: “My heart is expending with so much love and joy for this little baby girl she is an angel sent to us from above….,” Yolanda wrote.

“Thank you Mommy & Daddy for making me a Oma, I love every minute of it.”