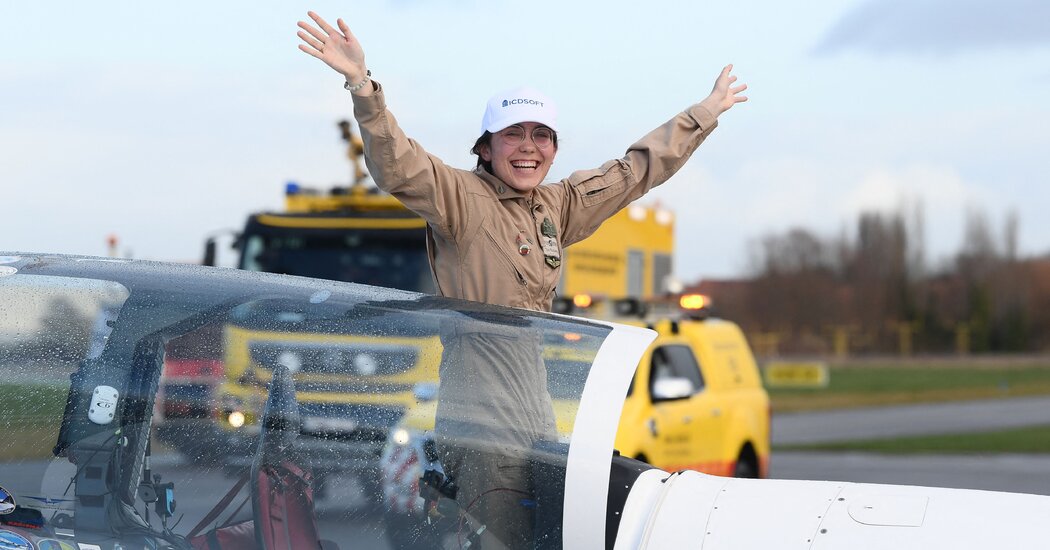 She could have started college. Instead, she spent five months flying more than 32,000 miles across five continents.

“My name is Zara Rutherford, a teenager,” she told the internet after leaving Belgium in August. “I’m attempting to fly solo around the world,” she said, aiming to be the youngest woman ever to do so.

Ms. Rutherford, 19, dodged giant clouds in Colombia and lightning flashes in Mexico. In Alaska, her tiny plane was grounded for weeks by bad weather and a visa delay.

That was all before the British and Belgian aviator crossed a frozen, desolate patch of Siberia. Before China barred her from its airspace. And before smog scrambled her route across India.

As delays piled up, Ms. Rutherford fell more than two months behind schedule. But she didn’t quit. When she landed in the Belgian city of Kortrijk on Thursday, she became the youngest woman to circumnavigate the globe solo. Supporters lined up on the tarmac to show their support and welcome her home.

“I didn’t expect a 19-year-old to beat my record,” Shaesta Waiz, an Afghan American pilot who set it five years ago at the age of 30, said earlier. “It just goes to show that it doesn’t matter what your gender or your age is; it’s all about determination.”

(The youngest person to circumnavigate the globe solo is Travis Ludlow, an aviator from Britain who did so in July at the age of 18.)

In August, as Ms. Rutherford flew across the Atlantic Ocean, clouds forced her to fly as low as 1,500 feet. She could not fly through them because her plane, a two-seater that is only about 22 feet long, was not certified to fly on instruments alone.

When she landed in Greenland after losing radio contact for several hours, she sent her parents — her mother is a recreational pilot; her father, a professional one — a two-word text message: “I’m alive.”

She later said she assumed the going would get easier in North America. It didn’t.

In Florida, she maneuvered around thunderstorms in the middle of hurricane season. As she was flying to Seattle in September, wildfire smoke seeped into her cockpit over Northern California, clouding her view and forcing her to turn around.

She faced challenges on the ground, too.

In North Carolina, she made an unplanned landing at a remote airfield because the daylight was fading. It was so tiny that no one was there when she arrived. A taxi company in the nearest city would not pick her up, so she hitchhiked.

In Nome, Alaska, she had to wait several days for her Russian visa to be renewed. Then, bad weather kept her there for a few more weeks.

But, Ms. Rutherford said, she was touched by the kindness of strangers she met along the way, including the man who hosted her in Alaska even though his family had just welcomed a newborn.

“When I left, his daughter was 5 weeks old, so I was there for over half her life,” she said.

Ms. Rutherford, who said she plans to study electrical engineering or computer science in college and wants to be an astronaut, has also received moral support from other women aviators.

At a stop in Florida, Ms. Waiz greeted the teenager’s plane and offered tips on dealing with adversity. And in Goose Bay, Newfoundland and Labrador, Capt. Erin Pratt, a search-and-rescue pilot with the Canadian Armed Forces, gave the flying wings that she had worn every day for seven years to Ms. Rutherford as a gesture of solidarity.

Flying any distance in a single-engine plane is a challenge for any pilot, Captain Pratt, 34, later said in an interview. Doing it throughout a round-the-world journey at low altitudes is exceptionally brave, she added.

“I look at that, and I’m like, girl, you are fierce,” said Captain Pratt, who became a pilot at 16 and joined the Canadian military at 18. “That is amazing.”

Ms. Rutherford said in August that she was under pressure to reach northeastern Russia by late September to avoid the onset of bad weather. She ultimately crossed Siberia in early November — at a time when ground temperatures were as low as minus 31 degrees Fahrenheit (minus 35 Celsius).

On one flight over a remote area, she said she saw airfields where she could, in theory, have made an emergency landing. But they were covered in snow.

From Russia, where bad weather stranded her again for a couple of weeks, Ms. Rutherford had planned to cross into the Chinese mainland. So when China barred her from its airspace as a coronavirus protocol, she had to fly more than six hours over water toward South Korea.

At one point during that flight, menacing clouds threatened to nudge her path toward North Korea instead.

“Do I head back to Russia?” she said she asked herself. “Do I cut into North Korean airspace and risk having some trouble with their military?”

She was finally able to land in South Korea as planned, but her itinerary was soon upended again by a low-pressure system linked to a typhoon in the Philippines.

In Borneo, she was grounded for several days by bad weather and faced the difficult choice of when to take off again. In the end, she crossed the tropical island but made an unscheduled landing at a domestic airfield on its southern tip. That was a safer bet than crossing the Java Sea — a notoriously dangerous place for planes — amid poor conditions.

A retired Malaysian fighter jet pilot who advised her on that Borneo leg, Lt. Col. John Sham, later said by telephone that he had been impressed by Ms. Rutherford’s poise, humility and instincts under very challenging circumstances.

“That is one fascinating, brilliant girl,” he said.

In late December, a flat tire that delayed Ms. Rutherford for a few days in Singapore was quickly eclipsed by a larger challenge: Smog had made the air quality so poor in some parts of South Asia that she could not cross the region safely by hugging the coasts of Bangladesh and India, as planned.

That required yet another workaround: a nearly 1,000-mile flight over a remote stretch of the Indian Ocean. (Sponsors and airports paid for the cost of the journey, wherever the route took her.)

“One thing I’ve learned on this trip — and I think this applies to everyone — is that you’re capable of more than you think you are,” Ms. Rutherford told reporters after crossing that ocean and landing in Sri Lanka in late December.

By that point in her journey, logistical hiccups were not just tolerated but expected. After a long flight over the Arabian Sea from Mumbai, India, Ms. Rutherford was unable to land in Dubai because of high winds. Last week, her plans for scooting across Europe were delayed by bad weather after she landed in Greece.

“I’m looking forward to my life not being weather,” she said in a telephone interview this month from Saudi Arabia.

Still, she said, she enjoyed taking to the skies and had been heartened to meet young women around the world who said she had inspired them to take up flying.

As for that pendant of flying wings that she had received from Captain Pratt, the search-and-rescue pilot in eastern Canada? It had been on her lapel ever since Goose Bay.