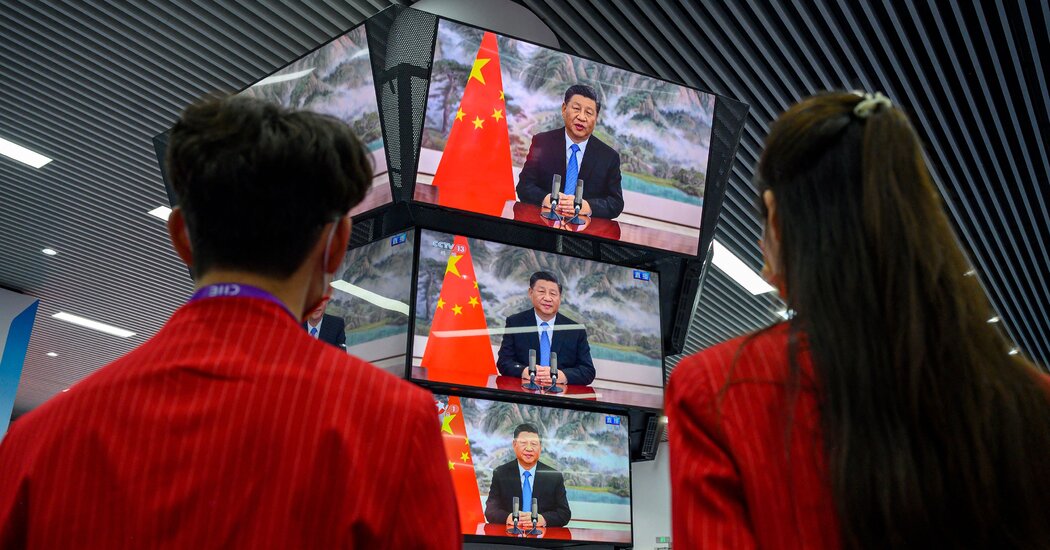 China’s top leader will most likely take center stage in a new official summation of Communist Party history. The document is likely to exalt Xi, 68, as a peer of Mao Zedong and Deng Xiaoping before his expected re-election at a party congress late next year.

The summation is sure to become the focus of an intense indoctrination campaign — in schools, culture and censorship laws — that will shape China’s politics and society for decades. It will also insulate Xi from criticism and give his policies the gravitas of destiny.

Context: No Chinese leader in recent times has been more fixated than Xi on history and legacy. The new history devotes over a quarter of its 531 pages to his nine years in power.

Quotable: “This is about creating a new timescape for China around the Communist Party and Xi in which he is riding the wave of the past towards the future,” said Geremie Barmé, a historian of China based in New Zealand. “It is not really a resolution about past history, but a resolution about future leadership.”

Joe Biden said he would sign a $1 trillion infrastructure bill that passed the House after rare bipartisan compromise.

The legislation is the largest public works bill since Dwight Eisenhower created the Interstate System. It designates nearly $600 billion to improve highways, transit, water quality and broadband over 10 years, and a record $47 billion for climate resilience.

But a second, larger bill — the $1.85 trillion social welfare and climate change legislation — is still in limbo. That, too, is a compromise: Democrats had originally proposed a $3.5 trillion package.

Logistics: A deal finally materialized on Friday when the Congressional Black Caucus proposed passing the infrastructure bill immediately and holding a separate vote on the social bill in mid-November.

Context: Biden cast the victory as critical to putting Americans to work and central to his strategy for competing with China. The deal came too late to help boost Democrats in recent elections, but it may be necessary to avoid an electoral disaster for the party in next year’s midterms.

Narendra Modi’s ruling party has long pursued a Hindu-first agenda. Now, its hard-line attitude toward Muslims has undermined India’s reputation as a voice for tolerance in South Asia.

The erosion of human rights in India has weakened its moral high ground in a region where the country has historically set the tone, and where sectarian conflicts are worsening. India’s tensions are also spilling out over its borders, as ethnic clashes deepen in Bangladesh, Sri Lanka and Pakistan.

Balance of power: The shift could open opportunities for China, which has used the promise of investment and access to its hard-charging economy to cultivate stronger relations with its rival’s neighbors.

Guam has about 30,000 stray dogs, one for every six residents. Its only dogcatcher is waging a lonely war against the rabid, vicious population.

Why do Americans eat sushi?

It’s delicious, sure, but there’s a lot more to the story.

In 1980, Rev. Sun Myung Moon, the founder of the Unification Church, addressed dozens of followers in New York City. Moon was Korean; many of the attendees were Japanese.

The Infrastructure Bill at a Glance

Transportation. The proposal would see tens of billions of dollars in new federal spending going to roads, bridges and transportation programs. Amtrak would see its biggest infusion of money since its inception, and funds would be allocated to programs intended to provide safe commutes for pedestrians.

Climate. Funding would be provided to better prepare the country to face global warming. The Forest Service would get billions of dollars to reduce the effects of wildfires. The bill includes $73 billion to modernize the nation’s electricity grid to allow it to carry renewable energy.

Resources for underserved communities. A new $2 billion grant program is expected to expand transportation projects in rural areas. The bill would also increase support for Native American communities, allotting $216 million to the Bureau of Indian Affairs for climate-resilience and adaptation efforts.

“You,” Moon later recalled telling them, “are the pioneers of the fishing business — the seafood business. Go forward, pioneer the way and bring back prosperity.”

As in many religious communities, businesses intertwined with his church hawked wares which supposedly cured ailments or curses. Money crossed oceans in briefcases. Eventually, maligned as a brainwasher, Moon was convicted of federal tax fraud in the U.S.

Before that, Moon’s money moved through fish, and the New York City gathering was the final piece of his plan. A corporation associated with the church had already spent more than $10 million on shipyards and seafood operations across the U.S. All they needed were salesmen.

Moon’s followers spread out across a country already enthralled with Japan, selling fish door to door. They tried to build God’s kingdom and ended up creating a national appetite — and a company that supplies 70 to 80 percent of midrange and high-end sushi restaurants.

This sweet-and-salty squash recipe can be done with most hearty orange vegetables, like sweet potatoes or even carrots.

The film “Spencer” is the latest in a long line of TV and movie depictions of Diana. Here’s a selection.

What to Listen to

Songs from Post Malone and the Weeknd, Radiohead and others are featured in our pop critics’ playlist.