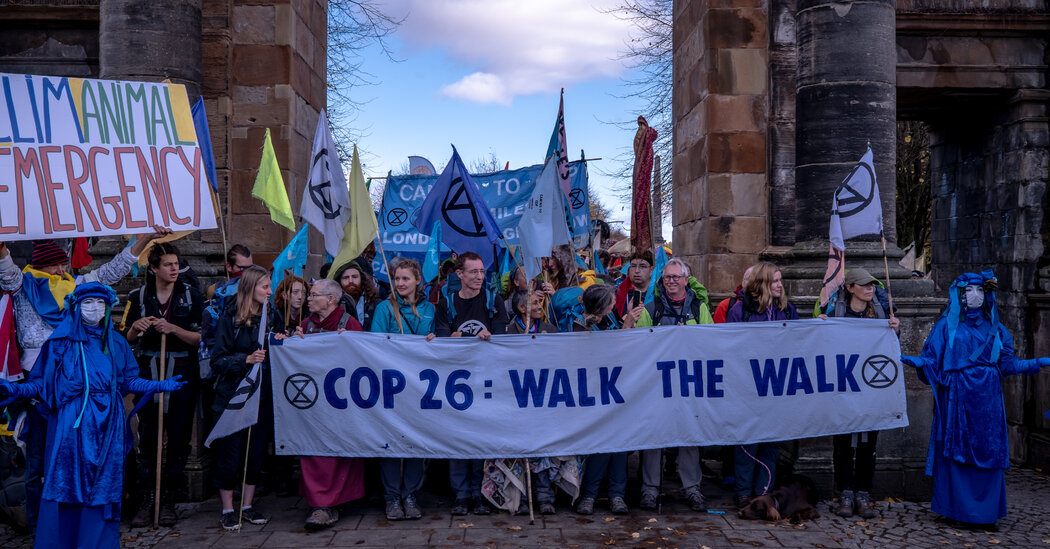 Presidents and prime ministers are gathering in Glasgow this week for the 12-day U.N. global warming conference, often referred to as COP26, to discuss global climate policies, which are likely to determine the future of the planet.

Tensions loom. Some poor countries hit hard by climate disasters are holding out for money promised from industrialized nations. Rising nationalism and the coronavirus pandemic offer grim lessons on the prospects for collective action. Divisions pit advanced countries against developing ones and big polluters against small, vulnerable countries.

The U.S. climate envoy, John Kerry, tried to manage expectations. “Glasgow was never, ever going to get every country joining up in Glasgow or this year necessarily,” Kerry said. “It was going to galvanize the raising of ambition on a global basis.”

Target: Any deal may have to be much larger than past ones. Even if all countries achieve their 2015 Paris Agreement targets, average global temperatures are on track to rise 2.7 degrees Celsius by the end of the century — 1.2 degrees over the goal.

Biden’s climate pitch: The president wants to assure attendees of the summit that the U.S. is serious about climate change. But he lacks the legislative victory at home to back that up.

Agreements and pledges at the G20 summit

At the opening session of the Group of 20 summit in Rome, world leaders endorsed a landmark global agreement to block large corporations from shifting profits and jobs across borders to avoid taxes.

The world’s largest economies also agreed to stop financing coal plants abroad, though that fell far short of what’s needed to fight climate change, raising fears of half-steps at this week’s U.N. climate summit. Leaders pledged to “pursue efforts” to limit warming to within 1.5 degrees Celsius above preindustrial levels by the end of the century.

Health care workers in Britain will begin a tour of more than 800 schools in an effort to inoculate 12- to 15-year-olds against the coronavirus, amid a surge in cases driven primarily by high infection levels in school-age children. More than a third of all recent reported cases were in children under 15.

While about 68 percent of the British public is fully vaccinated and more than six million people have received a booster shot, case numbers and deaths have not fallen, as they have in other Western European countries. Some researchers have blamed Britain’s delay to approve vaccines for adolescents.

Context: England has had some of the loosest coronavirus protections in Europe since July 19, when it lifted all legal restrictions, including mandatory mask wearing. In a recent survey, 21 percent of Britons said they rarely or never wore a mask in public — about four times as many as in Italy and Spain.

“Absolutely stunning” is how the University of California, Santa Barbara, described plans for a new 11-story residence hall — one in which the vast majority of students would live in small, windowless rooms.

A consulting architect saw it differently, writing: “The basic concept of Munger Hall as a place for students to live is unsupportable from my perspective as an architect, a parent and a human being.”

Back in 1910, The Times lamented “the passing of the literary haunts of New York,” noting that many once-famous gathering spots were being razed as the city grew, including the stamping grounds of Walt Whitman and Edgar Allan Poe. Over the decades, dozens, if not hundreds, of other establishments have popped up to take their places.

Members of the literary set of the 1950s, among them James Baldwin, Dylan Thomas and Jack Kerouac, frequented the White Horse in the West Village, above.

In the 1970s, the Chelsea Hotel lured writers with cheap rent and rosewood-beamed rooms. William S. Burroughs finished “Naked Lunch” there, while Thomas Wolfe, who holed up in Room 829 in the last years of his life, wrote several books there, including “You Can’t Go Home Again.”

Decades later, Café Loup attracted luminaries such as Fran Lebowitz, Gay Talese and Christopher Hitchens, who once described it as “my true bar.” Zadie Smith paid tribute to it in her short story “Downtown,” calling it “a movable feast.”