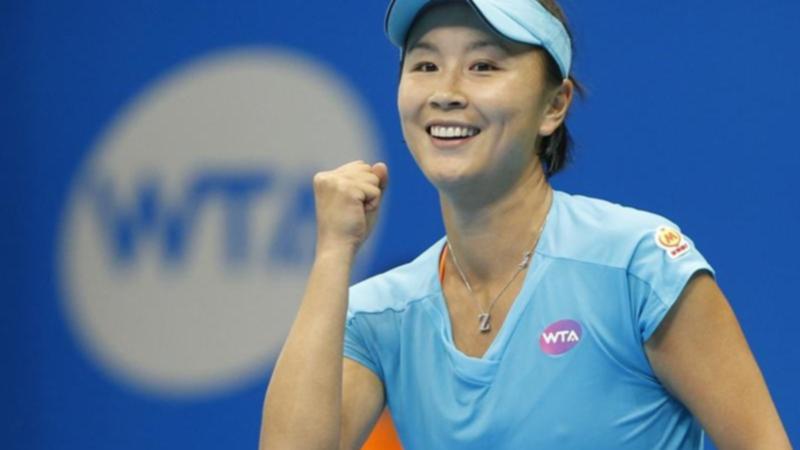 The outcry over the whereabouts of Chinese tennis star Peng Shuai has escalated with the Women’s Tennis Association (WTA) saying it is prepared to pull its tournaments out of China over the issue and the United Nations asking for proof of her safety and security.

The WTA’s threat prompted an influential Chinese state media editor to criticise the organisation for using a “coercive tone”.

Former doubles world No.1 Peng has not been seen or heard from publicly since she said on Chinese social media on November 2 that former vice-premier Zhang Gaoli coerced her into sex and they later had an on-off consensual relationship.

Neither Zhang nor the Chinese government have commented on her allegation. Peng’s social media post was quickly deleted and the topic has been blocked from discussion on China’s heavily censored internet.

Concern for Peng among the global tennis community and beyond has grown with the WTA calling for an investigation. Some of the world’s top tennis players, including Serena Williams, Naomi Osaka and Andy Murray, as well as the German Olympic Committee, have tweeted #WhereIsPengShuai.

The issue has emerged as China prepares to host the Winter Olympics in Beijing in February amid calls from global rights groups and others for a boycott over its human rights record. The International Olympic Committee has declined to comment on Peng’s matter, saying it believed “quiet diplomacy” offered the best opportunity for a solution.

Liz Throssell, a UN human rights spokesperson, called for proof of her whereabouts and wellbeing as well as a transparent investigation into her allegations.

WTA Chief Executive Steve Simon told various US media outlets on Thursday the tour would consider pulling tournaments worth tens of millions of dollars out of China.

“We’re definitely willing to pull our business and deal with all the complications that come with it,” he told CNN.

“Because this is certainly, this is bigger than the business. Women need to be respected and not censored.”

Hu Xijin, the editor of the Global Times, responded to Simon’s comments on Friday on Twitter, saying “don’t use a coercive tone when expressing any concern to China.

“Perhaps you did it out of goodwill. But you should understand China, including understanding how the system you dislike has promoted the actual rights of the 1.4 billion Chinese,” said Hu, whose newspaper is published by the ruling Communist Party’s official People’s Daily.

China has been the focus of the WTA’s most aggressive expansion over the last decade and hosted nine tournaments in the 2019 season with a total $US30.4m ($A41.8m) of prize money on offer.

The season-ending WTA Finals had a prize purse of $US14m ($A19m) in 2019 when it was played in Shenzhen for the first time.

The Finals were cancelled last year due to the COVID-19 pandemic and moved this year to Guadalajara, Mexico, but the WTA has said it will return to Shenzhen from 2022 until 2030.

Streaming platform iQiyi is the WTA’s digital rights partner in China, signing a 10-year deal reportedly worth $US120m ($A165m). The deal commenced in 2017.

The hashtag #WhereIsPengShuai has so far racked up over 32 million mentions on Facebook’s Instagram and Twitter, according to hashtag analysis website BrandMentions. Both platforms are blocked in China.