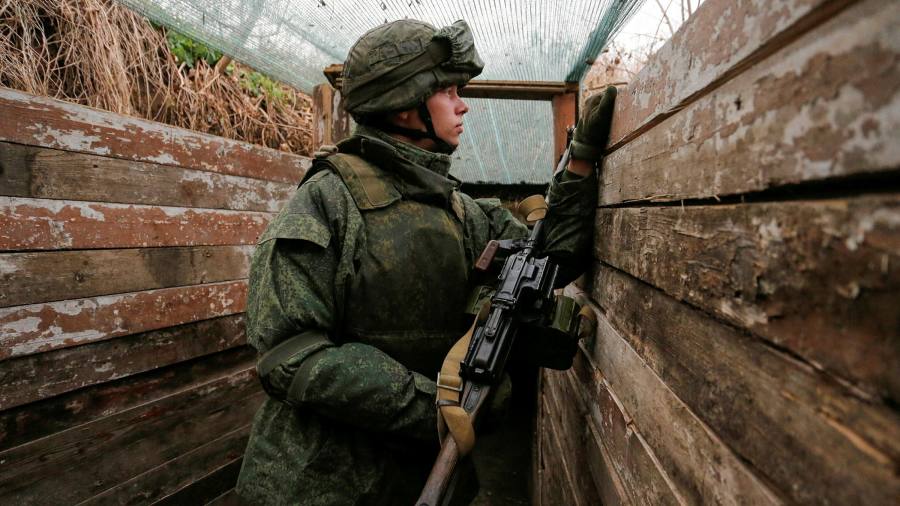 With Russia in the grip of runaway inflation and a divisive push for Covid vaccine passports, state television’s most-watched news talk shows have turned to a favourite subject in trying times: Ukraine, the “brotherly nation”-turned-familiar bugbear for the Kremlin.

The heightened tensions with the west over a troop build-up near the border have highlighted Russia’s fixation with Ukraine during a seven-year proxy war that has killed more than 14,000 in the eastern Ukrainian region of Donbas.

Vladimir Putin, Russia’s president, has denied any Russian involvement in Kyiv’s conflict with Moscow-led separatists, but made Ukraine the centrepiece of a 30-minute address to foreign policy officials this week, telling them the war footing was a reminder to the west not to cross Russia’s “red lines”.

Those include a promise that Nato refrain from expanding into Ukraine, according to Kremlin spokesman Dmitry Peskov, who described it as “an extremely undesirable and unacceptable scenario for us”.

The Ukraine issue is an emotional one for Russians, who retain close cultural and family ties to the country despite several years of war.

Evgeny Popov, a lawmaker and former co-host of 60 Minutes, Russian state television’s most popular talk show, is a case in point: he is unable to visit his father, who lives in a Ukrainian town he would not name, thanks to an entry ban by Ukrainian security services.

“People don’t watch these shows for entertainment value — they see what’s happening to their relatives and loved ones,” Popov said.

“We are one people. It’s basically the same space — it just so happens that we’re on other sides of the border thanks to some villains,” he added.

Analysts say Putin’s desire to rid Ukraine of western influence is underpinned by a conviction that it is an inalienable part of the “Russian world”, a Moscow-centric sphere of influence rooted in the Soviet Union and the Tsarist empire.

Putin has described the collapse of the USSR, which separated millions of intermarried families on either side of the Ukrainian border, as “the greatest geopolitical catastrophe of the 20th century” and has questioned the grounds on which Ukraine broke off from Russia.

Following Russia’s annexation of Crimea in 2014, Putin likened the Ukrainian peninsula, where Vladimir the Great — the first Christian ruler of Rus, a medieval state ruled from Kyiv — was baptised in 988AD, as “Russia’s Temple Mount” — a notion that has no theological basis but cast Putin as the protector of Russians everywhere.

Moscow has sought to put that into practice by protesting against laws introduced by Kyiv that aim to promoting the primacy of the Ukrainian language, including limitations on using the Russian language in public settings and an exclusion of Russians from a list of Ukraine’s “indigenous peoples.”

The language laws have proved relatively uncontroversial in Ukraine, where Ukrainian is growing popular even among some native Russian speakers, but provided ample fodder for Russian TV.

“They’re trying to destroy the Russian people. We need to save that people,” said Popov.

In July, Putin published a 5,000-word article, apparently based on his own historical research in which he wrote that he was “convinced that the true sovereignty of Ukraine is possible only in partnership with Russia” and vowed Moscow would never allow the country to become “anti-Russia”.

“In Putin’s understanding, the people of Ukraine are basically one with Russians, so they should support integration with Russia. But since the country is under the thumb of the west the people are being tricked — they’re hostage to geopolitical games,” said Tatiana Stanovaya, founder of political consultancy R. Politik. “If the Americans left, it’d be a unified state . . . and everything would be great. Or so Putin thinks.”

The article sparked concerns in Ukraine that Putin — who has avoided requests to meet his Ukrainian counterpart Volodymyr Zelensky and visibly lost interest in the Ukrainian peace process — had grander designs on the country.

“Putin has a sense of mission on reinstalling a new kind of empire. It’s sitting very deep in his mind. Not just Ukraine’s success, but also any separate path of Ukraine would be highly damaging to the Russian mythology,” said Pavlo Klimkin, Ukraine’s former foreign minister.

Klimkin, who was born in Kursk, Russia, added: “The narrative in Russia is that there is no Ukrainian identity as such, including history, language, mentality and statehood. Putin’s stance on Ukraine is highly irrational. Ukrainians and Russians have two different sets of values.”

Dmitri Trenin, director of the Carnegie Moscow Center, said Russia had neglected to study Ukraine’s changing society over the years in favour of dealing directly with its oligarchical elites, many of whom had close business ties to Moscow until 2014.

That blinkered attitude led the Kremlin to write off surges in pro-western sentiment, such as the 2004 Orange revolution and the Euromaidan protests a decade later, as manipulation by foreign powers rather than reflective of broader changes in Ukrainian society, Trenin said.

The war had accelerated those social changes to the point where “separate Ukrainian statehood is incompatible with any meaningful integration with Russia”, added Trenin.

Ukraine’s cultural ties to Russia made Moscow’s stand-off with the US over security all the more poignant, Popov said, likening recent Nato exercises in Ukraine and western support for Kyiv’s military to the Cuban missile crisis.

“There’s a great joke that captures what this is all about — Russia and America will fight each other until there are no Ukrainians left,” Popov said. “America’s far away, that’s a geopolitical advantage. And the missiles and anti-missile systems and tanks and troops and bases [ . . .] are in Ukraine. Why should we put up with that?”