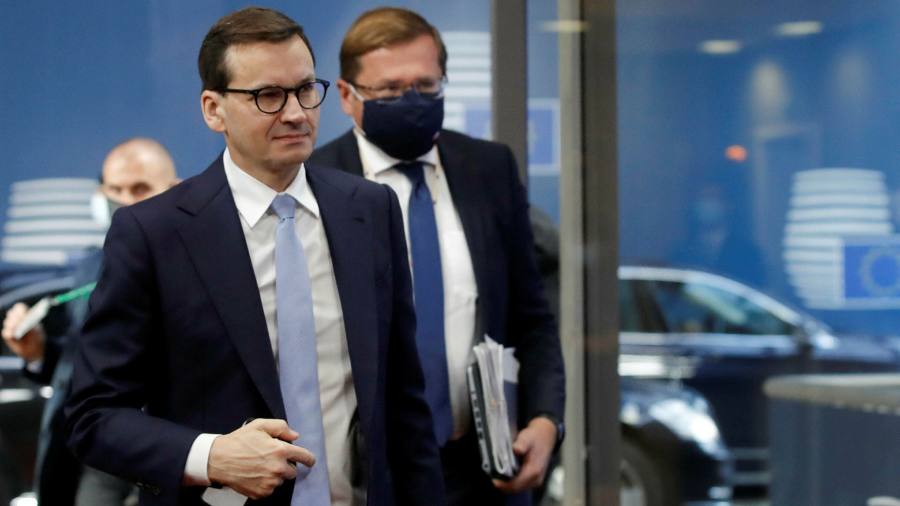 Tensions within the EU over Poland’s flouting of the rule of law are reaching new heights. Poland’s prime minister Mateusz Morawiecki was hauled over the coals in the European Parliament in Strasbourg last week following a ruling by the Polish constitutional tribunal that parts of the EU treaties were incompatible with the country’s constitution. The ruling — issued at Morawiecki’s behest — strikes at the heart of the EU’s legal order. It has infuriated other member states, who raised their concerns at an EU summit last week, along with MEPs, who are piling pressure on the European Commission to punish Warsaw. In Strasbourg, commission president Ursula von der Leyen all but vowed retaliation, including financial, but refrained from immediate action.

Rather than take that as an opening for conciliation, Morawiecki has chosen defiance and empty threats. In an interview with the Financial Times, he uses extraordinary bellicose rhetoric about the stand-off, warning Brussels against starting “a third world war”. He also demands the commission drop fines issued against Warsaw for failing to comply with previous rulings by the European Court of Justice.

Morawiecki’s belligerence shows the commission should stand firm on infringement proceedings since they clearly matter to Poland. Brussels should also make Warsaw bear the cost of its transgressions. If nothing changes, Brussels must reject its plans for spending EU recovery funds and launch the new rule of law “conditionality” procedure that could result in the suspension of regular EU transfers as well.

It is saddening that such financial measures should be necessary. But at least they may work. Recently, some Polish regions quickly withdrew anti-LGBT resolutions when Brussels warned it would cut off funding.

Morawiecki has accused critics of double standards. Other countries’ constitutional courts have also asserted their ultimate right to assess how EU law is applied, he argued in Strasbourg. To this there are two things to say.

The first is that while other national courts have also claimed a role in assessing the reach of EU law, none has ruled their constitution in conflict with the treaties. (Attempts such as the German constitutional court’s to second-guess the ECJ clearly encouraged Poland to go further, however — proving that critics of Karlsruhe were right to accuse it of paving the road to a constitutional crisis.)

The second is that to the extent that some around the EU legitimately worry about the balance between the ECJ and national sovereignty, their cause is undermined when made in such bad faith. Poland’s government — which itself sought the incompatibility ruling — is not trying to work out a well-defined legal order. It is transparently trying to escape any limits the law places on what it can do, whether through national or European judges.

If a national constitution really were incompatible with the EU treaties, then the burden would squarely be on the country in question to make it compatible — or give up EU membership. Ideally, the prospect of substantial financial losses will prompt Warsaw to undo the damage it has done. But deft diplomacy will need to complement overdue tough action on the EU side.

Some member states are worried a conflict between Warsaw and Brussels could go too far and push Poland on to a slippery slope towards EU exit. Taking Morawiecki at face value and opening a discussion on the balance between treaty law, national sovereignty and the ECJ’s role might offer a face-saving compromise. Poland’s own actions and rhetoric have, however, made such a route harder.