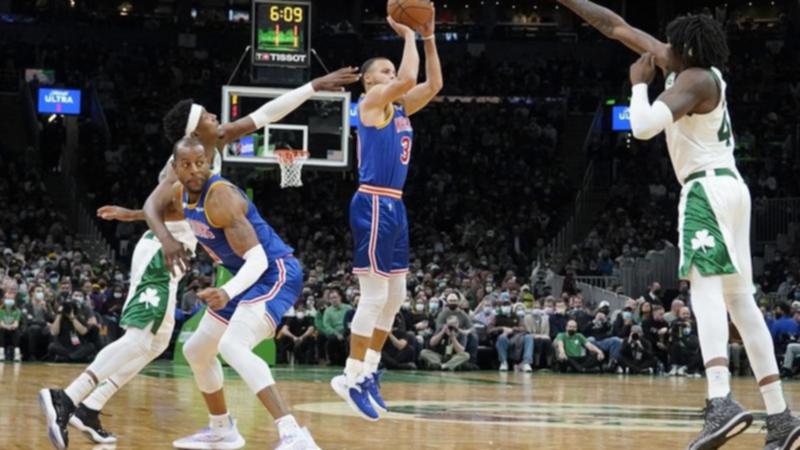 Stephen Curry scored 30 points, hitting five three-pointers and adding a one-handed scoop shot in the final minute, to drive the Golden State Warriors to a 111-107 victory over Boston.

In his first game since breaking the NBA’s career three-pointer record at Madison Square Garden, Curry hit back-to-back threes on his first two shots of the game to help snap a five-game losing streak against the Celtics.

Andrew Wiggins added 27 points to help the Warriors win their third straight game to reclaim sole possession of the NBA lead at 24-5 – a half-game ahead of Phoenix. It was Steve Kerr’s 400th coaching victory.

Jayson Tatum scored 27 points for the Celtics. They placed five players in the COVID-19 protocol in the 24 hours leading up to the game.

In Orlando, Max Strus scored 23 of his career-best 32 points in the first half as the Miami Heat beat the Orlando Magic 115-105.

Gabe Vincent added a career-best 27 as the Heat made 19 three-pointers to give them 91 over their past five games.

That’s the most in the team’s history, easily topping the 82 made over a five-game stretch from February 24 last year to March 4.

The Magic signed four players from their G League franchise in nearby Lakeland with hardship exemptions to meet the NBA’s minimum eight-player rule.

Rookie Franz Wagner led the Magic with 27 points, but Orlando have now lost seven straight and 13 of 14.

The Denver Nuggets made it three of four with a 133-115 win over hosts Atlanta.

The Hawks were coming off a fifth-straight road victory, but they have dropped six in a row at home.