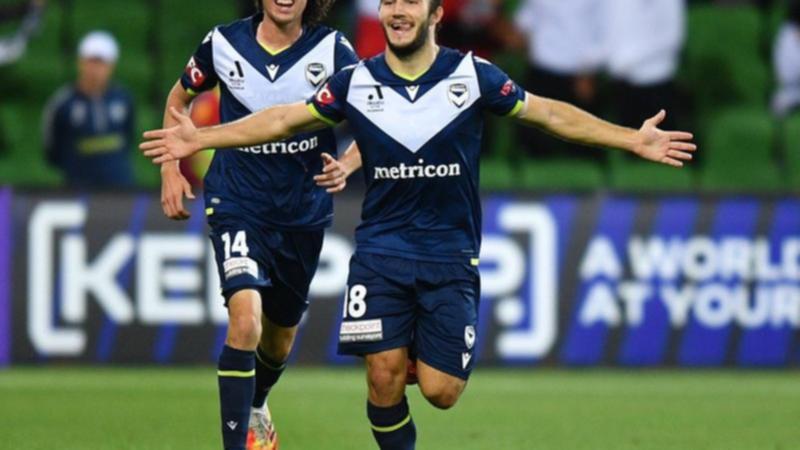 Four days after knocking Adelaide United out of the FFA Cup, A-League Men leaders Melbourne Victory have been forced to settle for a dramatic 1-1 league draw with their fierce rivals.

The club confirmed Davidson, Spiranovic and Ikonomidis were injured while “a number of players” were sidelined due to COVID protocols.

Reds skipper Stefan Mauk had told Network Ten earlier on Saturday he planned to soon take up a contract in Japan, but played the full game.

Victory dominated most of the contest but both teams failed to take golden opportunities.

Adelaide’s Jacob Tratt failed to bury free headers in both the 23rd and 70th minutes, while D’Agostino was foiled by Ryan Kitto’s block in the 38th, and spurned a close-range chance in the 61st minute.

The game burst to life six minutes from the end of regular time.

Victory substitute Lleyton Brooks perfectly controlled a long ball then squared it to D’Agostino, who took a couple of touches before firing a brilliant left-footed strike into the top corner.

Javi Lopez lashed a brilliant strike home but in the lead-up, Mauk had dived for a header then got caught between Kelava’s legs, forcing the Victory goalkeeper to jump over him.

Kelava protested Mauk had impeded him, and the goal was chalked off.

Adelaide equalised nonetheless minutes later when Lopez broke down the right and lifted a cross towards Goodwin, who smashed a precise left-footed volley home.

Adelaide’s Josh Cavallo was substituted off after copping an accidental elbow to the head from Brooks in the 94th minute.

D’Arrigo was forced off the field with a knee injury, leaving the Reds down to nine for the final moments, but Adelaide held on.