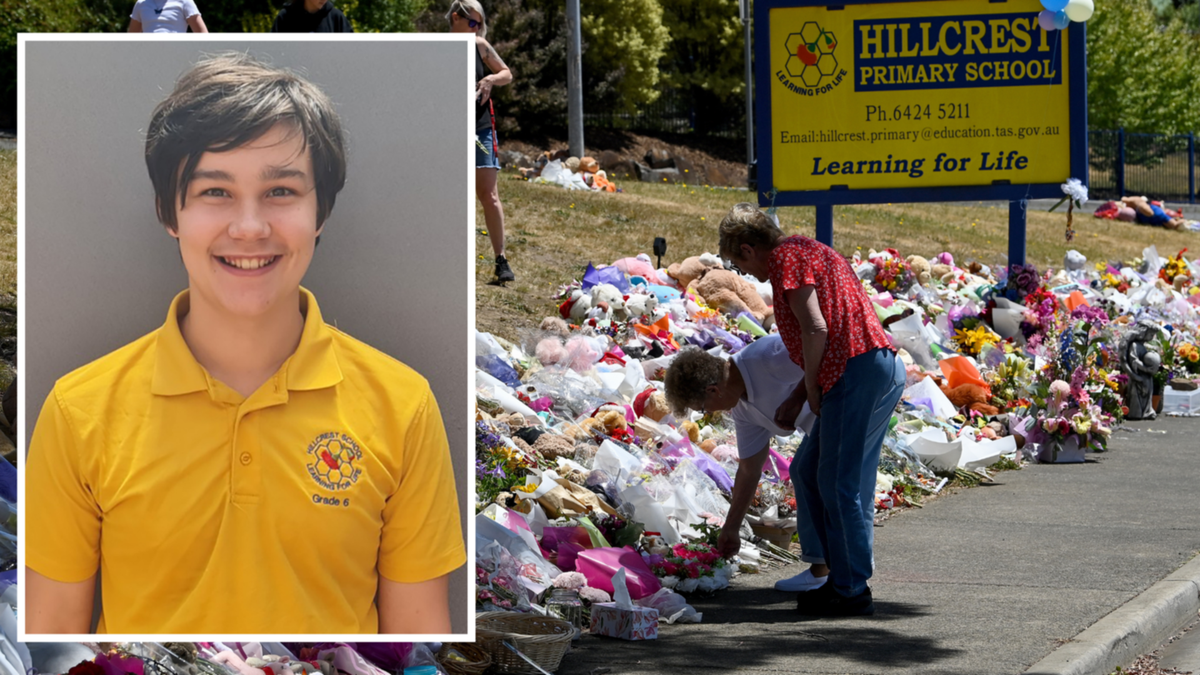 Family and friends will formally farewell one of the six Hillcrest Primary School students who died in a jumping castle accident in northwest Tasmania.

Streams of people have continued to leave flowers, soft toys and tributes and pay respects outside the school in Devonport, one week since the tragedy.

Zane Mellor, 12, will be remembered at a funeral in the city on Thursday morning.

Two children remain in a critical condition in the Royal Hobart Hospital, while one other injured in the accident is recovering at home.

Georgie Gardam, Zane’s mum, spoke of her agony in the days following the tragedy as she visited the memorial set up at the front of the primary school.

“I just needed to see what everyone had done and I really appreciate it so much but nothing brings my baby home,” Georgie told 7NEWS.

“I have all these Christmas presents and we’ve opened some of them and just sat them up for him.”

“To the love of my life, my first born , my world – I miss you beyond words, this isn’t real,” the post read.

“How do we go on without you?”

“Thank you to you all for the invaluable and caring work you have done and continue to do with everyone affected by this tragedy,” she said.

“We very much appreciate your service and dedication and want you to know how much you are all appreciated by our Tasmanian community.”

An online fundraising page set up by Devonport local Zoe Smith has raised more than $1.4 million for the families.

Prime Minister Scott Morrison, who visited the school along with wife Jenny on Saturday, has announced $800,000 will be made available to fund trauma counselling for people impacted.

Police, including specialist officers from NSW, have started interviewing the many young witnesses of the accident, which will be examined by the coroner.

Roughly 40 children were enjoying end-of-year celebrations when a freak gust of wind picked up the jumping castle and several inflatable zorb balls.

Earlier this week, the Glenorchy City Council in southern Tasmania banned jumping castles and inflatable devices from being used on council-owned property.

Tasmania’s education department has put a stop to inflatable equipment being used on school sites.