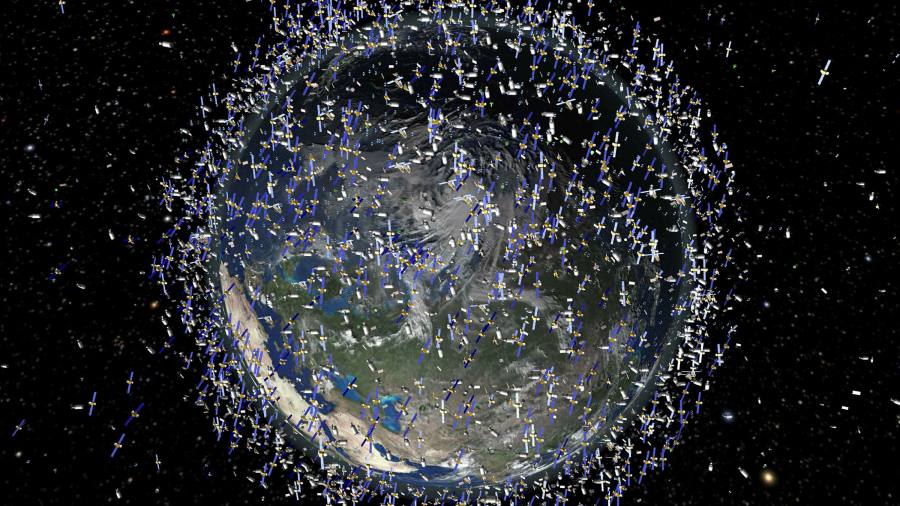 This article is an on-site version of our #techFT newsletter. Sign up here to get the complete newsletter sent straight to your inbox every weekday

As we fire more and more wonderful tech into orbit around the Earth, the need grows for increased “space traffic control” and simple garbage collection tech to cope with decay and inevitable obsolescence.

The problem of space debris has been highlighted this week by Russia blowing apart one of its own satellites in a test of an anti-satellite missile. The US protested that it generated more than 1,500 pieces of “trackable orbital debris and will likely generate hundreds of thousands of pieces of smaller orbital debris”, threatening people working at the International Space Station and “other human space flight activities”.

There is no tech deployed to date that can “Hoover” up such potentially deadly fragments. Japan’s Astroscale is the closest we have to a space clean-up company. Its ELSA-d prototype successfully demonstrated in August how it could magnetically capture redundant satellites, with the aim of towing them away to disintegrate in the Earth’s atmosphere as they descend. UK satellite company OneWeb is already fitting its latest satellites with compatible magnetic docking plates.

Katrina Manson and Max Seddon report the debris cloud created by Russia in low earth orbit threatens to affect hundreds of commercial satellites, including from SpaceX and the US imaging company Planet, while refocusing rising tensions between Russia and the US on the escalating weaponisation of space.

“They basically set off a bomb in the middle of the new space race,” said Daniel Ceperley, chief executive and co-founder of Leo Labs, which uses radar to track objects in space to prevent collisions.

Seraphim said it had also invested in antenna, earth observation and navigation companies. “The SpaceTech investment market remains buoyant, with record levels of private investment,” said CEO Mark Boggett. Its research shows $6.4bn was invested in SpaceTech in the first half of this year and nearly 600 satellites were launched in the second quarter. Anyone with good ideas on how to enable a circular economy for the thousands of objects circling the earth ought to be getting some of that money as well.

The Internet of (Five) Things

1. US states investigate Instagram’s targeting of younger users
At least nine states are examining whether Facebook violated consumer protection laws and “put the public at risk” by promoting Instagram to children and young adults, “despite knowing that such use is associated with physical and mental health harms”, according to Maura Healey, Massachusetts’ attorney-general.

​​​​​2. Ford wants to be number one in electric vehicles
Ford wants to become the world’s largest electric-car maker, overtaking industry leader Tesla and larger rivals including Volkswagen. Jim Farley, Ford chief executive, said the carmaker now planned to produce 600,000 battery vehicles a year by the end of 2023, twice the level of current plans.

#techFT brings you news, comment and analysis on the big companies, technologies and issues shaping this fastest moving of sectors from specialists based around the world. Click here to get #techFT in your inbox.

3. Reverse Mode and crypto in the classroom
London-listed fintech group Mode has been forced to back pedal on claims it would provide cashback in bitcoin to shoppers at retailers, including Boots, Homebase and Ocado, after the companies denied their involvement. Lucy Kellaway’s Weekend Essay is about a crypto craze in the classroom.

4. Open-source investigators seek justice in Myanmar
Since the military coup, social media has filled up with images of people who have been beaten or fatally shot. In response, online outlets are using pioneering digital forensics to assemble criminal evidence, laying the groundwork for future crimes-against-humanity trials.

5. It’s in the game
EA and Fifa are in conflict over the value of naming its soccer game after football’s governing body. Meanwhile, the English Premier League has secured a huge $2.7bn coverage deal in the US with NBC. Lex says the value of international rights could soon surpass those for the UK.

How to Spend It’s Jamie Waters has been looking at smart wearables, from Ray-Ban sunglasses to super shoes from Nike. There is also clothing featuring the “wonder material” graphene and the latest Fitbit fitness monitor.

#techAsia — Your guide to the billions being made and lost in the world of Asia Tech. Sign up here

#fintechFT — The latest on the most pressing issues in the tech sector. Sign up here