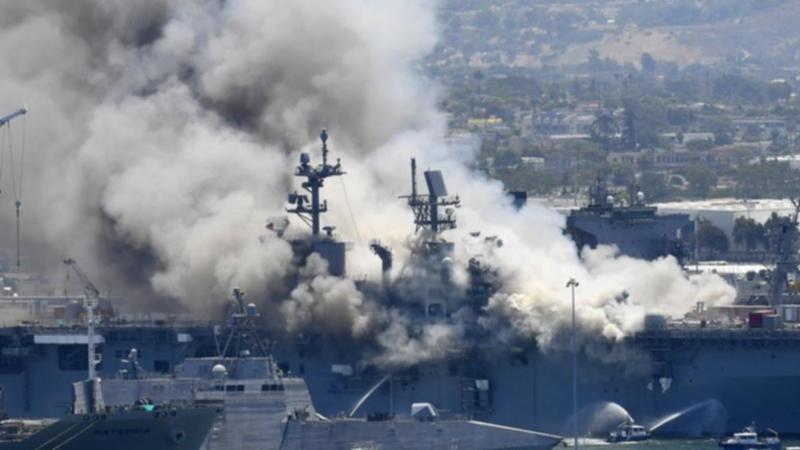 The US navy will hold a hearing to determine whether there is enough evidence to order a court martial for a San Diego-based sailor charged with setting the fire that destroyed the USS Bonhomme Richard in 2020.

Ryan Sawyer Mays, a junior sailor, was charged with aggravated arson and the wilful hazarding of a vessel in a case that marked the maritime branch’s worst warship blaze outside of combat in recent memory.

Mays, who was a crew member, has maintained his innocence.

He told investigators he helped fight the blaze.

About 160 sailors and officers were on board when the fire started on July 12, 2020, in the lower storage area of the 256-metre vessel, which had been docked at Naval Base San Diego while undergoing a two-year $US250 million ($A351 million) upgrade.

More than 60 sailors and civilians were treated for minor injuries, heat exhaustion and smoke inhalation.

Mays was assigned to the ship after dropping out of training to become a Navy SEAL and he was described by some fellow sailors as a person who had disdain for the navy, according to investigators.

Mays’ lawyer Gary Barthel did not respond to a request for comment before the hearing.

Officials assessing the ship’s damage found three of four fire stations on the ship had evidence of tampering: fire hoses were disconnected and one was cut, according to court documents.

They also found uncapped bottles containing small amounts of highly flammable liquid near the ignition site, including one that tested positive for a heavy petroleum distillate such as diesel, kerosene or jet fuel, according to the court documents.

Mays told investigators he was in the hangar bay when he became aware of the fire, according to court documents.

He described how he assisted firefighters, alerting at least one crew member of the threat, and eventually helped fight the blaze, court documents say.

Winds coming off the San Diego Bay whipped up the flames that shot up the elevator shafts and exhaust stacks.

Two explosions – one heard as far as 20km away – caused the fire to grow even bigger.

Dozens of navy officials, including several admirals, are facing disciplinary action for systematic failures that investigators said prevented the blaze from being put out sooner, according to investigators.