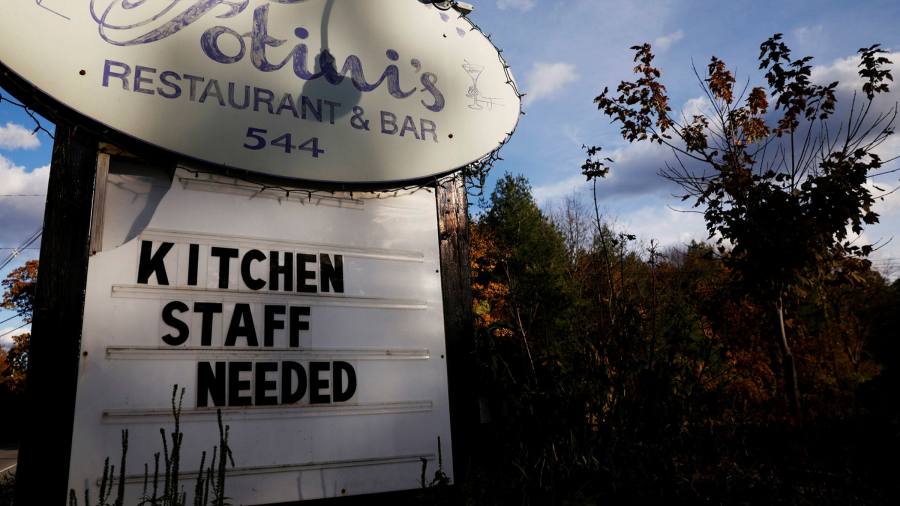 This article is an on-site version of our The Road to Recovery newsletter. Sign up here to get the newsletter sent straight to your inbox three times a week

Good evening from London, at the end of a busy week of central bank announcements and employment data giving us a clearer insight into the state of the global recovery.

The latest clue comes in today’s US jobs report, which showed employers added 531,000 jobs in October, up from the previous month’s revised figure of 312,000 and closer to the monthly average of around 580,000 since the start of the year. Unemployment fell to 4.6 per cent from 4.8 per cent.

There were “widespread” gains, according to the US Bureau of Labor Statistics, led by leisure and hospitality with 164,000 jobs, professional and business services adding 100,000 jobs and manufacturing generating an additional 60,000. The better than expected figures sent US stocks up, putting them on track to hit a new record.

The data are a marked improvement after the spread of the Delta variant of coronavirus had undermined progress in recent months and exacerbated an already serious problem with labour shortages. They come just days after the US Federal Reserve announced it would start “tapering” its pandemic stimulus programme after achieving “substantial further progress” towards Fed chief Jay Powell’s twin goals of maximum employment and inflation averaging 2 per cent.

Wages continue to rise, but Powell insisted current inflationary pressures were not due to a “tight labour market” and instead reflected supply-chain bottlenecks and other shortages.

Today’s news from the US follows data for the eurozone on Wednesday showing unemployment was back at pre-pandemic levels. The bloc’s jobless rate fell from 8.6 per cent to 7.4 per cent in September. About 2m fewer Europeans were looking for work compared with the same month last year, prompting unemployment to fall to December 2019 levels.

Labour shortages continue to crop up as constant themes in company results and economic statistics, such as this week’s PMI surveys for services in the UK and US.

UK chancellor Rishi Sunak told a parliamentary committee this week he was “cautiously optimistic” about the country’s labour market after the pandemic furlough scheme ended, but several sectors have voiced concern about how Brexit has exacerbated difficulties in recruiting staff.

A lack of butchers, for example, means meat producers are now sending pig carcasses to Europe for processing before they are shipped back to Britain. However, the poultry industry said it would need only about half of the emergency visas for foreign workers announced by the government, after turkey farms cut production and managed to recruit some workers locally. Both industries have struggled to hire overseas staff under the UK’s new points-based immigration system.

A report published today highlights another structural change in the UK workforce that has been accelerated by the pandemic: the number of people employed in the gig economy has trebled in the last five years.

Need to know: the economy

Bank of England chief Andrew Bailey has insisted that interests rates were still likely to rise in the coming months after the bank surprised markets yesterday by keeping them on hold. The pound dropped again today, reflecting concerns over the central bank’s messaging, putting sterling on track for its worst week since June.

Even as the COP26 climate conference strives to chart a path away from fossil fuels, oil prices are still soaring thanks to surging demand and insufficient supply, as our Big Read explains. The US has blamed the Opec+ producers group for putting the global economic recovery at risk.

More than 40 countries signed a pact to phase out coal use at the Glasgow summit, but the US has refused to play ball. Signatures from major coal consumers China, India and Australia are also noticeably absent.

Latest for the UK and Europe

The rapid deterioration in UK-EU relations, exemplified by the current spat over fishing rights, is worrying many people in the far more economically important financial services sector who fear there will be a negative impact on pending decisions in Brussels to grant British institutions “equivalence”, allowing them to operate on the continent.

Industrial output in Germany, the eurozone’s biggest economy, unexpectedly shrank in September by 1.1 per cent, following August’s contraction of 3.5 per cent, according to new data this morning. Retail sales in the eurozone also fell unexpectedly, raising concerns over the health of the consumer sector.

Shoppers around the world are feeling the effects of a huge surge in food prices because of factors such as bad weather and supply chain problems. The UN Food and Agriculture Organization’s measure rose 31 per cent in October, as global food commodity prices passed their 2008 and 2011 peaks — just before the Arab spring protests that were partly caused by soaring food costs.

This year’s stock rally in developed economies has not been replicated in emerging markets. Investors fear that the Fed’s announcement on Wednesday that it would begin winding down its pandemic stimulus programme could trigger a further flight away from EM stocks.

IAG, the owner of British Airways, Iberia and Aer Lingus, has warned it would lose another €3bn this year after being shut out of the lucrative north Atlantic market during the pandemic. Unlike low-cost rivals Ryanair and Wizz Air, which both returned to profit over the summer, IAG will not be able to recover until its long-haul operations are back in the air. Meanwhile, Qantas is benefiting from a surge in bookings as Australia opens up.

Lettings company Airbnb has been boosted by the rebound in travel, nearly quadrupling its profits compared with the same period last year. Net income of $834m was up 280 per cent on the 2020 period and was 212 per cent higher than the same (pre-pandemic) quarter in 2019.

Simon Roberts, head of the UK’s second-largest supermarket J Sainsbury, said there would be less choice of some products this Christmas, as he detailed inflationary pressures and supply chain problems, particularly at its Argos stores. Some shipping times from Asia have stretched from 25 days to more than 40.

Watch: How are restaurants faring now that pandemic restrictions are starting to ease? The FT’s Tim Hayward and Daniel Garrahan travel to rural Scotland to see how one farm-to-fork restaurant has navigated the crisis.

Treatments: New trial data showed Pfizer’s antiviral pill, known as paxlovid, cut the risk of hospitalisation or death for Covid-19 patients by 89 per cent. The results indicate it could be even more effective than Merck’s molnupiravir, which received its first approval in the UK on Thursday. US travel stocks, including cruise companies and airlines, rose on the news today.

Pandemic control: In the week when the official global death toll from the pandemic passed 5m, the World Health Organization has warned that Europe was moving back to the “epicentre” of the crisis as a surge in new infections sparked fears of a new wave of the pandemic this winter. Germany on Thursday reported 33,949 new cases, its biggest daily increase since December, with the number of patients in intensive care the highest since May. The spike could put Europe’s health systems under fresh strain after months when the virus appeared to be in decline. Mandatory mask-wearing is back in the Netherlands.

FT analysis showed that many more people had died in Russia than government statistics stated. The FT Editorial Board said Russia’s vaccine disinformation had let down its own people.

Wellcome director Jeremy Farrar has resigned as UK government science adviser. Farrar, who has a global reputation as a public health leader, had been advocating stronger pandemic measures than ministers but said his resignation was not a protest move.

The debate over the pandemic’s origins reignited after a US intelligence report suggested that the virus jumped from animals to humans via an accident at the Wuhan Institute of Virology.

Vaccines: Novavax’s vaccine won its first approval after Indonesia authorised the jab, raising hopes that it could boost immunisation efforts in the developing world.

US companies will have two months to implement the Biden administration’s new Covid-19 “vaccine or test” mandate, or face fines as high as $130,000. The new rules for any company with 100 employees or more will be enforced from January 4. The US is also encountering some resistance rolling out its vaccination programme for 5-11 year olds, a global first in the battle against the pandemic.

A UK regulator has called for improvements in vaccination statistics.

Join us for the FT Global Pharmaceutical and Biotechnology Conference, the essential annual event for pharma industry leaders, on November 8-10. Keynote speakers include the CEOs of Sanofi, Novo Nordisk and Roche Pharmaceuticals.

Get the latest worldwide picture with our vaccine tracker

Virtual worlds have long been a common theme in science fiction, but in recent weeks the term “metaverse” has entered the public discourse, with Facebook rebranding itself as Meta and aiming to be the first builder of a three-dimensional alternate universe. Tech correspondent Madhumita Murgia examines how sci-fi shapes our attitude to the future.

FT Asset Management — The inside story on the movers and shakers behind a multitrillion-dollar industry. Sign up here

Thanks very much for reading The Road to Recovery. We’d love it if you shared this newsletter with friends and colleagues who might find it valuable, so please do forward it. And if this was forwarded to you, you are very welcome to sign up and enjoy it — and access to all of the FT — free for 30 days. Please sign up here.

Please also share your feedback with us at roadtorecovery@ft.com. Thank you