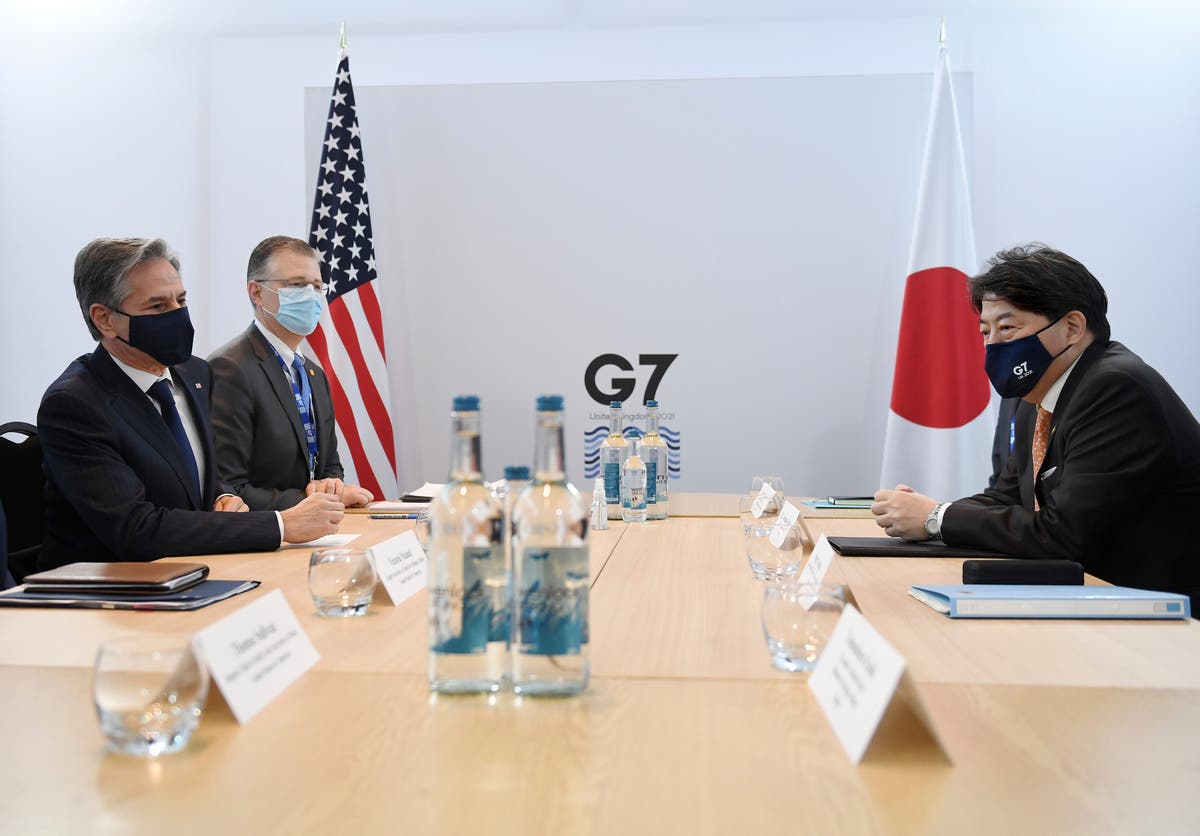 Top U.S. and Japanese officials are holding strategic and security talks on Thursday just two weeks after negotiators ended a Trump-era row by agreeing in principal to a new formula for paying for the American military presence in Japan.

The virtual meeting between the U.S. and Japanese foreign and defense ministers comes as tensions are rising between both allies and China — a concern manifested in the signing of a defense agreement earlier Thursday between Japan and Australia, the first such pact Japan has sealed with any country other than the United States. The talks also come in the immediate aftermath of a worrisome new North Korean missile test.

State Department spokesman Ned Price said the meeting would be looking at “ways the United States and Japan can strengthen and modernize the alliance to advance a free and open Indo-Pacific region.”

But the agenda could be complicated by the surge in coronavirus cases. Japan asked the U.S. hours before the talks were to begin to lock down American military bases on its soil due to the spread of COVID-19.

That request was made to Secretary of State Antony Blinken by Japanese Foreign Minister Yoshimasa Hayashi in a one-on-one phone call before Thursday’s so-called “2+2” meeting, which gathers Blinken and Hayashi along with Defense Secretary Lloyd Austin with Japanese Defense Minister Nobuo Kishi.

The meeting will take place by video conference due to COVID concerns, notably after Austin tested positive for the virus and is quarantining at home with what his spokesman John Kirby described as mild symptoms.

Hayashi said Blinken had promised the U.S. would take utmost efforts to ensure people’s health, but it was not immediately clear if a base curfew would be issued. U.S. Forces in Japan would not comment on the request, but said a team was carefully monitoring cases and trends.

Hayashi’s request came as the U.S. military is vowing more stringent measures, including requiring all personnel, even those vaccinated, to wear masks on base until a third negative coronavirus test.

American forces have been criticized after a spike in coronavirus cases in areas where they are based in large numbers, including Okinawa and Iwakuni, both in southern Japan. COVID-19 cases among U.S. Forces in Japan now total 1,784, about a third of them on Okinawa, according to USFJ. Iwakuni has reported 529 cases.

Yet Japanese Prime Minister Fumio Kishida’s government clearly sees a benefit to the American military presence and shortly before Christmas agreed to a new cost-sharing pact with the United States that is expected to be formally signed on Friday in Tokyo.

Former President Donald Trump had railed about the costs of deployments of U.S. forces abroad and had demanded that host countries, including Japan, pay significantly more for their upkeep than many were prepared to offer, badly straining relations with allies in Asia and Europe.

President Joe Biden’s administration has sought to smooth those disagreements and last April resolved an impasse with South Korea over the costs. The Dec. 21 consensus with Japan on a new four-year “Special Measures Agreement” is another tangible result of that policy.

Kishi said the two sides had also opened the door to the U.S. military establishing a new base on Japanese soil, and the Kyodo news agency reported on Dec. 23 that the Japanese and U.S. militaries have compiled a draft joint plan for a possible Taiwan emergency, such as fighting between Chinese and Taiwanese forces.

Under the terms of the hosting deal, which will run to 2026, Japan will spend approximately $1.82 billion annually to support the U.S. military presence. The United States has about 55,000 troops in Japan, including a naval contingent, which makes it the largest forward-deployed U.S. force in the world, according to the GAO.

The State Department said the agreement “promotes greater mutual investment in defense and improvements to our forces’ interoperability, and includes an increase in cost-sharing contributions from Japan.”

Apart from cementing those terms, the U.S. and Japan are hoping to increase cooperation and coordination on combatting China’s increasing assertiveness in the Indo-Pacific region as well as explore ways to bring North Korea back to the negotiating table over its nuclear weapons program.

On China, the U.S. and Japan are already part of the so-called “Quad,” which also includes Australia and India and aims to blunt what is seen as Chinese aggression, notably in the East and South China Seas. Biden has hosted two meetings of those leaders since taking office last year.

As part of Japan’s efforts, it signed a defense pact with Australia earlier Thursday that is aimed at breaking down legal barriers to allow the troops of one country to enter the other for training and other purposes.

At the same time, the U.S. and Japan are increasingly worried about threats from North Korea, which on Wednesday fired a ballistic missile into the sea in its first weapons launch in about two months.

Wednesday’s test of what the North says was a “hypersonic missile” was widely seen as a signal that Pyongyang isn’t interested in rejoining denuclearization talks anytime soon and would rather focus on boosting its weapons arsenal.

Despite repeated entreaties from the Biden administration the North has declined to rejoin even preliminary discussions on the nuclear issue. Price called on the North to refrain from further tests, which he said were a violation of U.N. Security Council resolutions, and urged it to respond to offers to restart the talks.