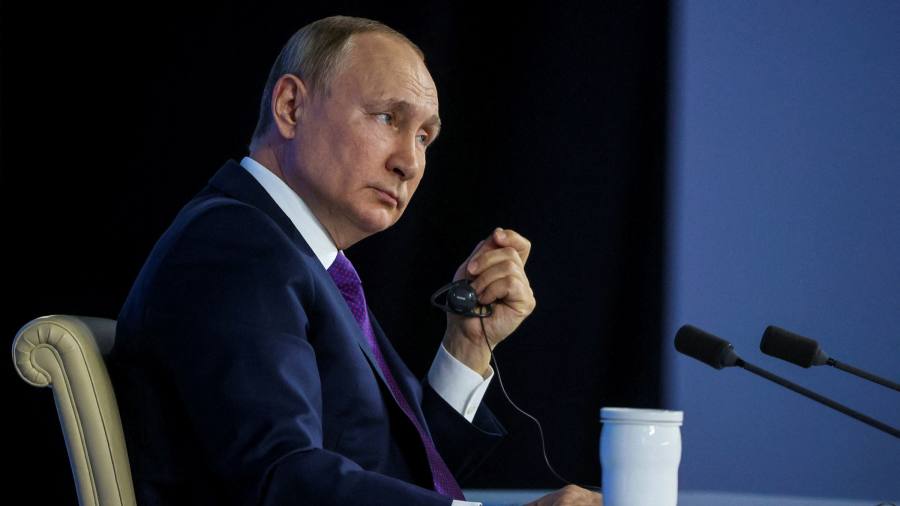 Vladimir Putin said the US and Russia would meet in January in Geneva to discuss tensions over Ukraine, which he said were essential to protect Moscow from what he claimed were existential threats from Nato.

Speaking at his annual press conference in Moscow on Thursday, the Russian president welcomed a “positive reaction” from the US to two sets of draft proposals on European security that Moscow published last week, which he said the sides would discuss at bilateral talks early next year.

“Our American partners are telling us they’re ready to start this discussion, these negotiations,” Putin said. “Representatives from both sides have been appointed. I hope that this is the way the situation will play out.”

He added: “The ball’s in their court. They need to tell us something in response.”

The proposals include a request that Nato pledge to stop admitting any members from the former Soviet Union — chiefly Ukraine — and that it curb military deployments. The US has said it is open to discussing the demands, some of which Nato has previously said are unacceptable, while seeking ways to deter Russia from military action.

Putin’s comments marked an openness to resorting to diplomacy first, in a slight softening from earlier this week, when he threatened to use Russia’s military if his security demands were not met. But the Russian leader also made it clear he viewed Ukraine as an existential, unfinished issue dating back to the USSR’s collapse in 1991, claiming that parts of its neighbour were Moscow’s “historical territories”.

The US has warned allies in Europe that Moscow was massing about 100,000 troops near Ukraine’s border with an intention to launch a possible invasion, which the Kremlin first denied.

But on Thursday, Putin refused to rule out another military solution to the tensions with Ukraine. Kyiv, he claimed, was planning an offensive to reclaim Donbas, the eastern border region now controlled by Russia-backed separatists, that broke away in 2014 following Moscow’s annexation of Ukraine’s Crimean peninsula. More than 14,000 people have died in the slow-burning conflict in the Donbas.

The west is working to “make Russia collapse from within”, Putin went on, and is laying the grounds for war by arming Ukraine’s military and “brainwashing the population”.

“Our actions won’t depend on how the negotiations go but on whether Russia’s security is ensured unconditionally, today and in historical perspective,” he said.

He added: “What’s not clear here? Are we putting missiles next to the US border? No! It’s the US that has come with its missiles to our home, they’re already at the threshold. Is it really asking too much not to put any more strike systems near our home?”

Putin said Nato had “blatantly tricked” Russia by allegedly pledging to expand “not one inch eastward” in the 1990s, and was threatening Moscow further with what he claimed were plans to deploy troops and missile systems to Ukraine. Russia’s draft proposals include a demand Nato restrict all future military deployments to members that joined before 1997, when it began admitting former Communist satellite states in eastern Europe.

“We need to understand how our security can be ensured,” he said. “So, without any funny business, we just put it out there by saying that Nato shouldn’t move any further east.”

“You must give us guarantees — and immediately. Now.”

US president Joe Biden is hoping to defuse tensions by keeping diplomatic lines open with Putin while simultaneously preparing a sanctions package and possible military aid to Ukraine that the White House hopes could deter Russia from military action.

Some EU countries have balked at the US’s most stringent proposals, including proposed restrictions on Russian oil and gas imports and cutting Russian banks out of the Swift payment system.

Italian prime minister Mario Draghi said on Wednesday that Nato, of which Italy is a member, had “other priorities” and that Europe, which imports about 40 per cent of its gas from Russia, could not give up Russian gas supplies.