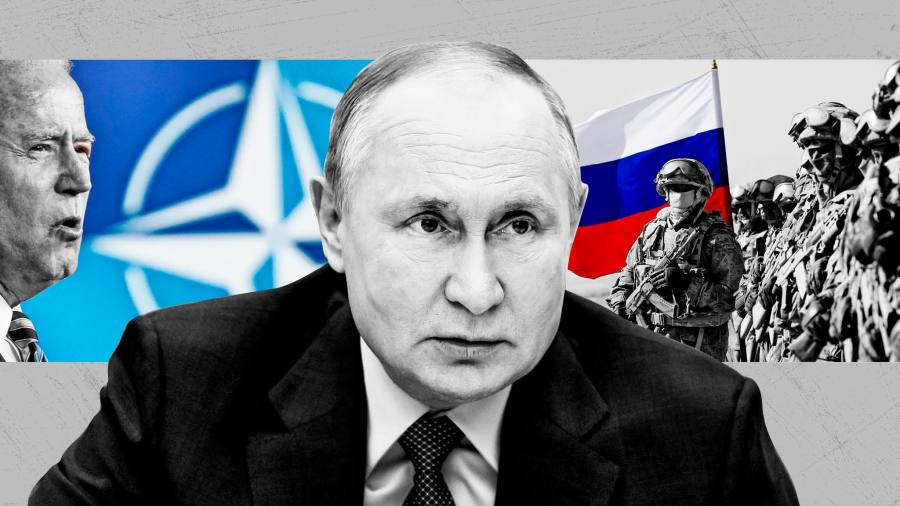 When Russia first began massing troops, tanks and artillery on its border with Ukraine in March, Vladimir Putin insisted the deployments were just a snap exercise.

But as the build-up has continued to swell to as many as 175,000 personnel, the US has warned allies the Russian leader may be planning a renewed invasion for real this time — and found Moscow in an increasingly belligerent mood.

In the past few days alone, Putin has likened Ukraine’s policy in the Donbas, the border region where Russia has led a slow-burning separatist war since 2014, to “genocide” — words Kyiv fears may be a pretext to invade.

Russian officials have vowed to intervene if Ukraine attempts to retake the region — which Kyiv sees as a thinly veiled threat of a Russian offensive. Sergei Ryabkov, a deputy foreign minister, even said the stand-off with the US over the country was the worst since the 1962 Cuban Missile crisis.

US president Joe Biden has rushed to de-escalate the tensions by offering Putin talks with Nato allies about Russia’s longstanding grievances with the transatlantic security alliance in a video call on Tuesday — although he also issued a threat of severe economic consequences in the event of an invasion.

“I don’t think this is over by any means,” says Samuel Charap, a Russia expert at Rand Corporation, a US-based think-tank. “It seems unlikely that a promise to talk is going to be enough for Putin to declare victory and send the boys home to Siberia for New Years.”

Officials and analysts in Washington and Europe — and even people close to the Kremlin in Moscow — admit Putin’s true intentions with Ukraine remain a mystery. Some speculate the troop build-up is a form of “reflexive control” that Russia has used to pressure the US into halting Nato’s expansion. Others see the aspersions Putin casts on Ukraine’s statehood as a sign the president is now willing to solve what he sees as the key foreign policy dilemma of his two decades in power with force if necessary.

“This is his life’s work. Everything he’s done as president has been about fighting Nato expansion,” says Tatiana Stanovaya, founder of political consultancy R.Politik. “So now he thinks it’s either now or never.”

In July, Putin published a 5,000-word article about Ukraine that alternated between professions of love for Russia’s “brotherly nation” and thinly veiled threats against Kyiv should it continue to drift away from Moscow.

It cast doubt on Ukraine’s continued existence within its current borders, argued that “the true sovereignty of Ukraine is possible only in partnership with Russia”, and vowed that Moscow would never allow it to become an “anti-Russia”.

The essay, apparently based on Putin’s own historical research, indicated how crucial Ukraine is to Russia’s conception of its own statehood — and how much Putin’s thinking on it has hardened since Russia annexed the Crimean peninsula from Ukraine in 2014.

“When Putin writes an article like that, it shows you that the state has really made a step forward,” says Konstantin Malofeyev, an Orthodox Christian tycoon who has close ties to the Donbas rebels and funds a Fox News-style online news channel seen as a bellwether for the hawkish fringe of Moscow’s elite.

“In the ’90s, pro-western liberal rhetoric was dominant in Russia and we were on the sidelines shouting that Russia has a special path,” adds Malofeyev. “Now, under Putin, we’re at the heart of things, because Putin thinks like us.”

Malofeyev dreams of an “imperial scenario” under which Ukraine will return to the Russian fold and eventually be subsumed into it — if necessary, by force.

“We are a divided people, just like Germany under the BRD and DDR” during the cold war, he says. “The war won’t last a week. It’ll be over in a matter of days. The whole regime will wind up in London and go around telling everyone that they would have ridden their tanks into Moscow if the [west] hadn’t given up on them,” he says.

The US has shared intelligence to convince even the most sceptical European allies that Putin may be prepared to make good on Russia’s quasi-imperial ambitions early next year but has yet to conclude precisely when or if he may give the order to invade.

Russia’s continuing military deployment, while larger than that seen earlier this year, is still missing some critical equipment and capabilities typically required for a sustained offensive, says a senior western intelligence official, adding that these elements could be brought to the border rapidly if needed.

“[Putin] has to take into account his pain-versus-gain calculation, and think about when diplomacy will be more fruitful and when threat of force is more fruitful, and be very dynamic,” says the official.

If Russia were to attack using the troops that the US says are being readied, “it would be the largest conflict on the European continent since World War Two”, the official adds. “To think that conflict would be contained to one nation is foolish.”

Some officials and analysts believe the bloody prospect of open warfare on Ukraine’s eastern border — where 14,000 have already died since 2014 in a conflict that Russia insists, despite overwhelming evidence to the contrary, it is not party to — means Putin is unlikely to resort to force.

Instead, they point to his demands for talks with the US on “legally binding security guarantees” over what Putin has called Russia’s “red lines”: namely, that Nato will commit to ceasing its eastward expansion and refraining from deploying troops or weapons in Ukraine that could be used to attack Russia.

Putin’s hostility to the alliance dates back to the mid-2000s, when Nato expanded into former Soviet territory for the first time by admitting Estonia, Latvia, and Lithuania, and the US deployed missile defence systems in Poland and Romania that Moscow feared could be used against it.

“The world made a big mistake by driving us into a corner. Yes, we are paranoid and have our Soviet hangover, but it takes several generations to get over it,” says a former senior Russian official.

“We were traumatised,” the former official adds. “America is the most powerful country and should have listened to us, but you were drunk on your own power — giving orders, saying that you are for everything good and everyone else is against freedom and democracy. You should have been more sympathetic.”

Following his call with Putin on Tuesday, Biden said that he would announce talks between Russia, the US, and a group of Nato allies to discuss Moscow’s demands for a new security order. However, Jake Sullivan, national security adviser, also said the president had made no “commitments or concessions” regarding excluding Ukraine from Nato.

Any future summit on Nato expansion “would be a significant achievement for Moscow, because they’ve recognised there’s a problem”, says Fyodor Lukyanov, editor of the Russia in Global Affairs Journal and an adviser to the Kremlin on foreign policy. “Neither the Americans nor the Europeans did that before — they said there were no problems with security in Europe, just problems with Russia. But if they need to meet, that means there’s something to talk about.”

The possible summit has alarmed some US allies on Nato’s eastern flank, who have questioned Biden’s overreliance on so-called Quint countries — France, the UK, Germany, Italy and the US — in its diplomatic overtures at the expense of consulting closely with Ukraine and Baltic states most affected by Russian aggression.

“It’s good that the US is leaning forward on this but we as Europeans feel discomfort for the fact that Ukraine is not a bigger part of the conversation and a number of countries such as Lithuania, Estonia and Poland who have been incredibly supportive of Ukraine are not part of that conversion,” says a European diplomat.

Kyiv believes that any compromise deal between the US and Russia would probably involve the delaying of any plans to offer Ukraine a Nato Membership Action Plan (MAP), a process by which potential alliance states seek membership, a senior Ukrainian official told the FT.

Nato declared its hope in 2008 that Ukraine would eventually become a member of the alliance alongside Georgia, but has taken no practical steps to admit it since Russia fought a devastating four-day war in the Caucasus country and occupied two breakaway Georgian territories.

The Russian foreign ministry demanded the alliance rescind that pledge on Friday as part of a proposed list of guarantees.

“The US obviously wants to freeze this issue and get it off the table. It is a major irritant [in relations with Russia],” says the Ukrainian official. “And they are of course more preoccupied with China.”

The terms put forward by Putin also make reaching an agreement difficult, Lukyanov says, because they would require the west to abandon its core security principles since the end of the cold war: that countries are free to choose their own foreign policy trajectory and no powers have the right to a sphere of influence.

“It’ll be funny if the six of them get together, Putin lays out everything he’s been saying, and they tell him, ‘Listen, dear Vladimir, what are you on about? We told you from the start that Nato’s not a threat to Russia, so why are you so nervous? We won’t do anything, just keep on peacefully expanding, because it’s freedom, democracy, and stability.’ It’s absurd,” Lukyanov says.

Brussels views the situation on the border as part of a broader campaign by Russia against the EU and its partners, commission officials have said, aligning it with the use of migrants by Moscow ally Belarus to pressure eastern EU states and the use of gas supplies to strong-arm Moldova into reducing its levels of engagement with the EU.

European commission officials are in daily contact with the Biden administration to discuss potential deterrence measures, a senior EU official said, but no detailed measures are expected to be announced by the 27-member bloc at a summit of leaders next week.

“We will be reacting very robustly in terms of the sanctions we will propose,” the senior EU official said, referring to “the economic and financial side”.

The US is pushing the EU and its member states to propose strong measures that would give Putin pause for thought, but is aware that the most far-reaching sanctions — targeting Russian energy exports or cutting off the country from the Swift international payments system — would undoubtedly hurt European economies more than the US.

“It all comes down to the west’s risk appetite and willingness to bear those costs,” says Maria Shagina, a visiting fellow at the Finnish Institute of International Affairs. “There are not many options where the west has nothing to lose.”

Some Russia experts in the US worry the Biden administration’s effort to telegraph the extent of possible US concessions may not be sufficient to deter Putin from taking a dramatic military step next spring.

They warn against reading too much into US-led efforts to hear Putin’s grievances over Nato. The administration has already indicated it would not concede to Putin’s demands for a blanket ban on enlarging Nato eastward.

“There’s very little reason to think that an issue of such cardinal importance for Putin is just going to disappear from the agenda,” says Andrew Weiss, a former Russia director of the US National Security Council. “Putin cares too much about Ukraine to listen to what the administration has been saying and respond with ‘Oh well, I guess I don’t care that much any more.’”