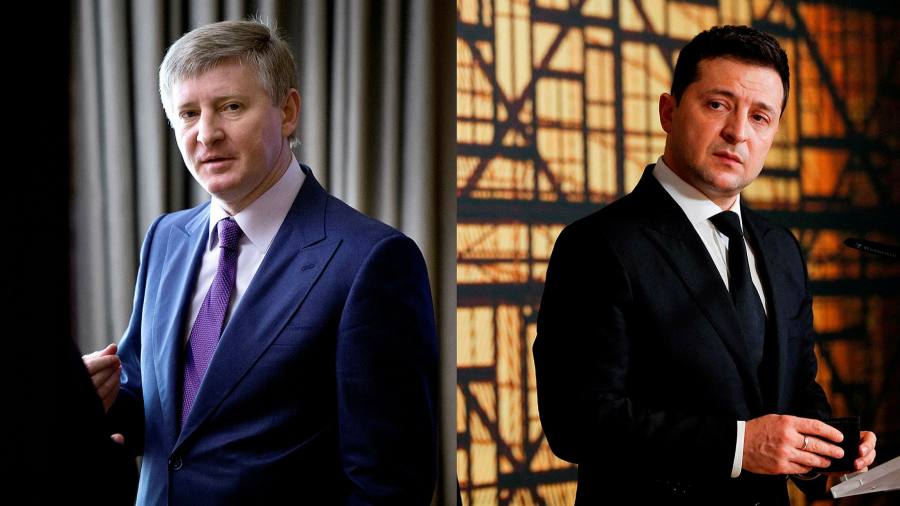 His country faces an imminent threat of full-blown invasion, according to US intelligence, with more than 100,000 Russian troops amassed at the border. But Ukraine’s embattled president Volodymyr Zelensky has chosen the moment of danger to deepen a domestic stand-off with the country’s richest oligarch, Rinat Akhmetov.

In a press conference late last month, Zelensky claimed, without providing evidence, that his intelligence services had uncovered plans for a Russian-backed coup that aimed to lure in support from Akhmetov.

“I think [Akhmetov] may not know about it,” the president said before adding: “I invite Rinat Akhmetov to [my office] to listen to the information that can be shared.”

Zelensky’s extraordinary decision to draw a powerful businessman into an alleged plot has dismayed analysts and western diplomats, given the heightened Russian threat and multiple problems including the country’s low Covid-19 vaccination rate and high death toll.

Oleksandr Danylyuk, briefly national security chief under Zelensky, said his weakness “is an unwillingness and maybe inability to consolidate society and elites amid the Russian aggression threat”.

“At a time when Russia is threatening to attack, it is really critical that the pro-Western forces in Ukraine be working together,” said a western diplomat who has worked closely with Ukraine. “The current domestic fighting in Ukraine is damaging.”

Zelensky won the presidency in 2019, promising to end the war in eastern Ukraine and to root out corruption. He has made little progress on the first and has a mixed reform record. A hoped-for robust economic recovery from the pandemic has faltered.

Akhmetov, a steel and energy tycoon, has rejected alleged involvement in a coup plot as “lies”. Experts say his television channels have been increasingly critical of Zelensky, upping the ante in a disagreement between two of Ukraine’s most powerful people.

“I don’t recall any other president who was ready to challenge Akhmetov” but “the Russians will exploit this moment when Ukraine is weaker internally”, said Daria Kaleniuk, director of anti-corruption watchdog Antac.

“Maybe Zelensky thinks going after the oligarchs will rally the population and ultimately help the national cause in resistance against Russia,” said Timothy Ash, analyst at BlueBay Asset Management.

Since winning the presidency in 2019 after many voters cast ballots in a protest at his predecessor, Zelensky’s poll ratings have plunged. A recent poll has shown that he could lose a re-election bid, with erstwhile ally Dmytro Razumkov, who was ousted this autumn as speaker of parliament, positioned to beat him in a run-off.

Experts say Razumkov has received favourable coverage on Akhmetov’s television channels. In turn, Zelensky’s MPs have boycotted what they view as hostile media.

“Because Akhmetov started eating into Zelensky’s popularity by using his media,” the president responded with his “fairytale” claim that the oligarch could be part of a coup plot, said Maria Zolkina, an expert at Kyiv’s Democratic Initiatives Foundation.

Their dispute is also grounded in legislation adopted this autumn taking aim at the influence of rich business figures.

The so-called de-oligarchisation law would formally register oligarchs — defining them by reference to their wealth and media and political influence. It would ban them from funding politics, prohibit participation in privatisation and require all contact with public servants to be reported.

“Akhemtov is really unhappy about this anti-oligarch law, and to some extent it is really a tipping point,” said Yuriy Vitrenko, chief executive of the state gas company Naftogaz and a trusted presidential confidant.

“It is very difficult for the president to implement [the rest of] his reform agenda unless he changes the situation with the oligarchs.”

In written comments to the Financial Times, Akhmetov questioned the fairness of the law, saying: “I am not an oligarch, I am an investor. And I am ready to defend it in Ukrainian and international courts.”

“We all need a fair competition and a level playing field,” he added.

Political analysts see scope for compromise between Zelensky and Akhmetov. “Zelensky wants an end to the massive criticism . . . which has been airing on Akhmetov’s channels,” said political analyst Volodymyr Fesenko. “Akhmetov wants the president to withdraw or soften the oligarch law.”

The oligarch law was “not the best solution,” a western diplomat in Kyiv said. “The way to defang the oligarchs is by improving antitrust law, speeding up judicial reform and building anti-corruption institutions . . . These things will have a bigger impact in the medium and long term.”

Some experts and diplomats fear the oligarch law could be used by Zelensky for a selective crackdown on non-loyal business figures.

“The question is whether the same approach is taken to all oligarchs,” said Kaleniuk. She pointed to positive coverage for Zelensky on channels owned by Igor Kolomoisky, an oligarch who backed the president’s election campaign.

Since before Zelensky’s election Kolomoisky has been part of legal battles over PrivatBank, a commercial lender nationalised in 2016 after authorities uncovered a $5.5bn hole in its balance sheet. Ukrainian authorities and PrivatBank allege in court cases spanning multiple jurisdictions that Kolomoisky and partners siphoned money out of the bank under their ownership.

Ukrainian prosecutors have not brought any charges against Kolomoisky, who denies claims of corruption.

Addressing parliament this month, Zelensky took another swipe at Akhmetov and other oligarchs without mentioning them by name. He unveiled plans to use taxes from natural resources for a fund for the country’s next generation to finance higher education and home purchases.

“Then our oligarchs will become real investors in our children,” Zelensky said.

“For the first time in 30 years, we have started a systematic struggle against the oligarchs. And I am sure that Ukraine will win this fight.”