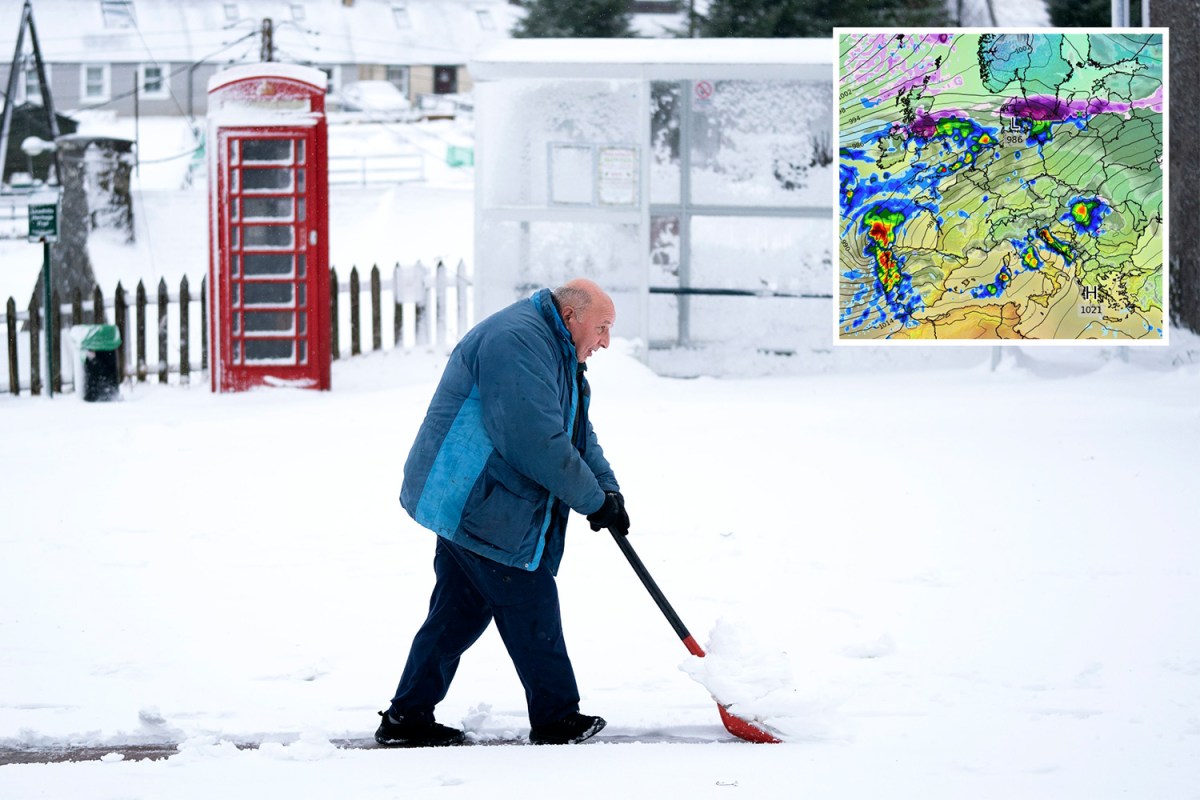 BRITS are set to be hit by snow flurries just in time for Christmas as temperatures plunge as low as -1C.

The UK could be in for a white Christmas as the mercury plummets this week and a snowbomb gears up to blast Britain.

By Tuesday night, the Met Office predicts temperatures will drop to a chilly 1C across most of Britain, with slightly warmer weather in the south.

In Scotland, the mercury is expected to dip below zero, reaching -1 in Loch Rannoch.

And the white stuff is set to fall across the UK from Thursday as temperatures plunge.

Maps from WXCharts show snow and rain sweeping into Scotland and the north of England on December 23.

Snow is also set to sprinkle most of the country on Christmas Eve and Christmas Day, particularly in the north of England and much of the Midlands, according to the maps.

The south of England might not wake up to snow on the big day, but they could see a dusting by 6pm and overnight into Boxing Day.

Bookmaker Coral said that odds for a white Christmas have been slashed for all major UK cities – with Edinburgh topping the betting for the most likely to see snow and Newcastle just behind.

Meteorologist James Madden, from Exacta Weather, told the Express: “Snow could arrive as early as Christmas Eve in parts of the south.

“Further snow is likely during the latter part of Christmas Day and on Boxing Day.”

He added: “Temperatures could also dip as low as -10C in the coldest and iciest areas over the festive period.”

The Met Office defines a white Christmas as one snowflake falling within the 24 hours of December 25 anywhere in the UK.

Jim Dale, of British Weather Services, said: “A white Christmas is definitely on.

“It will get colder through next week as high pressure breaks down and a system coming in on Christmas Eve clashes with cold conditions and brings snow.

“There is a chance of snow any time in any place.”

This is due to the La Nina effect, an unsettled weather front caused when warm North Sea temperatures mix with cooler water from the Pacific Ocean.

Storm Corrie could move in and drop a “snow bomb” from December 27, Netweather.tv reports.

If the pressure contained within the storm deepens by 24millibars in 24 hours, it will earn the title of “weather bomb”.

Mr Dale said: “We are expecting one more major storm this month which will set the trend for coming months.

“We expect five to six storms to hit through the winter period which could be severe enough to warrant naming.”

Weather charts suggest snow will fall in the North West on December 27, with 1cm expected in just one hour.

By December 28 – after continuous overnight blizzards – 2cm of snow per hour will come down across swathes of the North West, the south of Scotland, Southampton and Cardiff.

On the forecast for the week ahead, the Met Office said Sunday’s foggy, murky weather will clear for a cloudy but brighter Monday.

Met Office meteorologist Annie Shuttleworth said skies will clear further into Tuesday, which, after a frosty start, will be bright and sunny, and is “likely to be the best day of the week”.

It comes after Brits were treated to an unseasonable spell of warm weather this week.

The UK was hotter than Madrid on Thursday, as a 13C winter warmer swept in after torrential rain and gale force winds over the weekend.

The mercury reached a pleasant 10C in Leeds and 12C in Cardiff – rising to 13C in London.

This meant the capital was even hotter than the Spanish city of Madrid, where it reached highs of just 12C on Thursday afternoon.

Things are set to cool down, with low cloud and fog persisting across England and Wales.

There will be clear spells for parts of Scotland, west Wales and southwest England although frost is possible in some places.