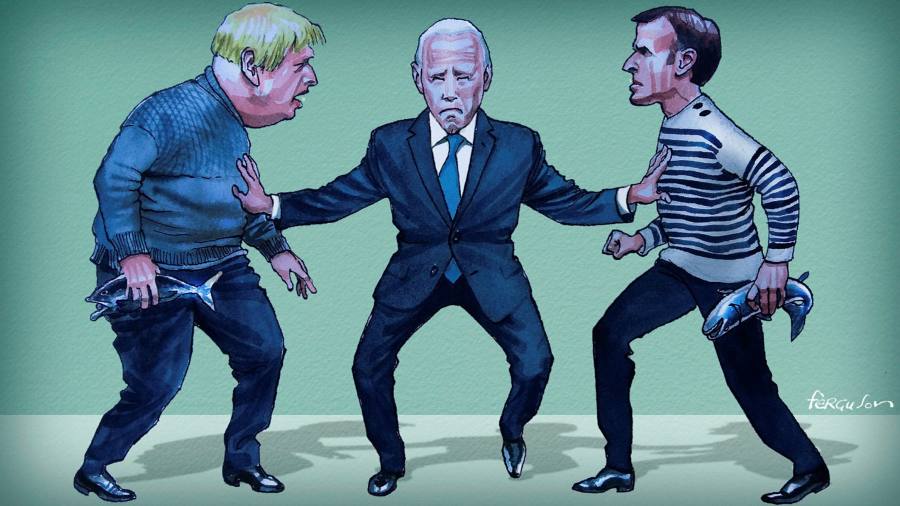 This is the week that Boris Johnson is meant to rally the world against climate change. But the British prime minister goes into COP26 distracted by an acrimonious row with France about fish.

Sniping and rivalry between Britain and France is becoming a serious international problem. The G7 summit in June took place against the backdrop of another Franco-British dispute — on that occasion about Northern Ireland.

Every minor disagreement between the two countries seems to escalate into an exchange of threats and insults. The underlying problem is not fish, or Northern Ireland. It is Brexit. Put simply, Johnson needs it to succeed and Emmanuel Macron, France’s president, needs it to fail.

A leaked letter from Jean Castex, France’s prime minister, to the European Commission suggested that it is important to demonstrate to European public opinion that the costs of leaving the EU are greater than remaining. The British have seized upon this as evidence that Paris is seeking to punish Britain for Brexit. The French claim that this is a wilful misinterpretation.

The UK government’s eagerness to put the worst possible gloss on the letter is telling. Although Johnson is riding high after a successful Conservative party conference, opinion polls suggest that the British public are coming to the view that Brexit was a mistake. In response to the question, “In hindsight do you think Britain was right or wrong to leave the EU”, 49 per cent replied wrong and 38 per cent right. Another recent poll showed 53 per cent believe that Brexit has led to higher prices.

These shifts in public opinion could spell trouble for Johnson, particularly if inflation and shortages worsen over the winter. That makes a clash with Macron all too tempting. If the French carry out a threat to slow the traffic of British goods through Channel ports, any subsequent shortages could be blamed on French bloody-mindedness rather than the inherent defects of Brexit.

The British government also seems to be preparing to make unilateral changes to the Northern Ireland protocol that was part of the Brexit deal. A row with France could allow Johnson to claim those changes are a response to French intransigence, rather than an act of bad faith by Britain.

Macron, like Johnson, is under intense political pressure. He faces a presidential election in April. Eric Zemmour, the rising star of the far right, has repeatedly insisted “the English won the battle of Brexit”. Macron needs to squash that idea.

The conclusion of Aukus — a secretly-negotiated security pact between Australia, the UK and the US — came as a severe blow to France. One US official says: “France believed Brexit had made Britain irrelevant and that we would bypass London. Then they discovered we had done a secret deal with the Brits, behind their backs.” France’s anger was compounded by the loss of a valuable defence contract with Australia.

The pressure the Macron government is under is reflected in the slightly hysterical tone of some recent communications. Clément Beaune, France’s Europe minister, asserted that the only language the British understand is force.

Something clearly needs to be done to wind down these tensions in a manner that lasts longer than a few weeks. Ben Judah of the Atlantic Council think-tank, who is a dual French-British national, makes the creative suggestion that the two countries should form a joint committee of grandees to work on a plan for cross-channel reconciliation. In an ideal world, such an initiative could pave the way for a new “Entente Cordiale” — the 1904 deal that defused a previous round of British-French rivalry.

But neither London nor Paris seems ready to patch things up. Peter Ricketts, a former British ambassador to Paris, predicts that there will be several more years of sniping before relations eventually improve.

The western alliance cannot afford that. The poison between the UK and France is liable to spread and infect Nato, the G7 and international negotiations on everything from climate change to trade.

UK-French frictions will also make it harder to form common western positions in disputes with China and Russia. Thomas Wright of the Brookings Institution worries that Britain and France risk turning into “the Japan and South Korea of Europe” — two close American allies that are also bitter rivals.

In Asia, the US has tried to build bridges between Tokyo and Seoul. It may now be time for Washington to perform the same role between London and Paris. The Americans need to squash illusions on both sides. The British need to understand that the US sees the EU as a crucial partner and will not snub Brussels in favour of “the Anglosphere”. The French need to accept that the US needs Brexit Britain to succeed and will not treat the UK as a rogue state.

America’s ability to play the role of honest broker is complicated by Aukus. But Biden seems genuinely contrite about blindsiding France and has moved quickly to patch things up.

The fact that both Macron and Johnson clearly value their close relationship with Biden gives the US an opportunity. To use the language of counselling, the Americans need to “stage an intervention”. They should try to persuade the British and French to drop their most outlandish threats and to work together in their own interests and those of the wider west.