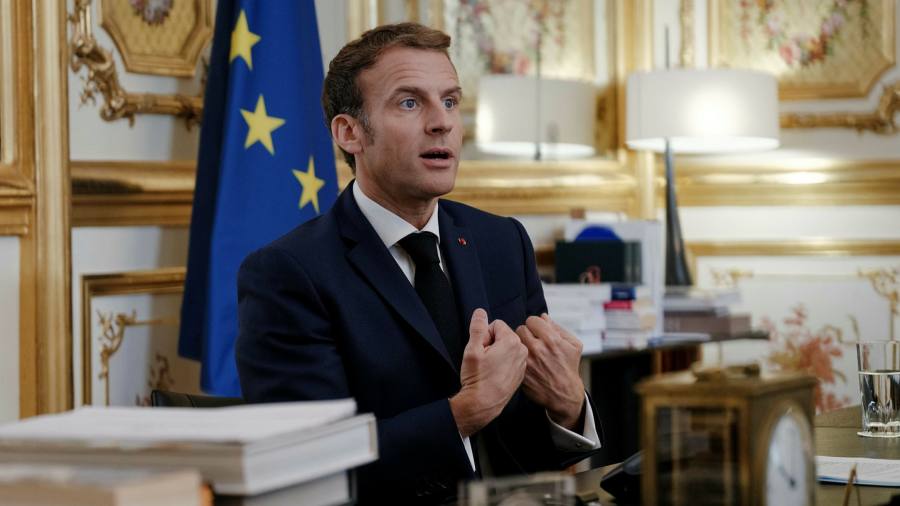 Emmanuel Macron warned Boris Johnson on Friday that the international reputation of the UK is on trial in the Brexit disputes over fishing rights and Northern Ireland.

In an interview with the Financial Times, the president of France said that for Johnson, the UK prime minister, and his government the issues represented “a test of their credibility”. Although Macron said he was sure of “goodwill” on the British side, he warned that other nations were watching closely.

“Make no mistake, it is not just for the Europeans but all of their partners. Because when you spend years negotiating a treaty and then a few months later you do the opposite of what was decided on the aspects that suit you the least, it is not a big sign of your credibility,” he said.

The French president’s comments followed warnings from British ministers of retaliation if cross-channel freight is disrupted by onerous border checks threatened by Paris from Tuesday in a dispute over fishing licences. The UK and EU are also struggling to resolve disputes over the Northern Ireland protocol that covers post-Brexit trade on the island of Ireland.

Tensions over fishing rights have been simmering for months after the UK failed to issue permits for some small French boats to fish in British waters under the Brexit agreement. Paris on Wednesday announced it would increase customs and sanitary controls on freight, make stricter checks of trucks coming in and leaving France, and ban trawlers from landing their catch in French ports if the dispute was not resolved.

A British trawler was seized and taken to the port of Le Havre on Thursday after the French authorities said it was operating without a licence. Another vessel has been fined. The UK’s Foreign Office summoned the French ambassador in London to discuss the situation with junior minister Wendy Morton on Friday afternoon.

Macron told the FT there had been “no provocation, no tension” over fishing rights, but added “we need to respect each other and respect the word that has been given”.

The president said he had “never created pointless controversy” with post-Brexit disputes. But he said the fishing issues were “important” for France and the UK. “We are talking about the life of our citizens.”

Johnson said he was “puzzled” by France’s threats, adding he would “do whatever is necessary to ensure UK interests”. The prime minister said he would be “surprised” if Paris sought to disrupt cross-channel trade but did not rule out revoking fishing licenses for vessels in British waters.

Officials in London fear the dispute could spiral into a full-blown trade war with France if post-Brexit checks are stepped up at Calais, further disrupting supply chains.

One British diplomat said: “I’m worried that London may not be taking seriously the French threat to choke the flow of freight and let empty shelves put pressure on the British.” Another added: “I’m not surprised at French action since we have been playing hardball.”

The UK is already facing trade disruption because of its decision to leave the EU. The country’s budget watchdog, the Office for Budget Responsibility, forecast this week that Brexit would drive a four per cent decline in the UK’s long-term productivity, relative to remaining in the EU. It also predicted total UK imports and exports will “eventually” be 15 per cent lower than if Britain had remained in the EU.

Lord David Frost, the UK’s Brexit minister, on Friday met EU Commission vice-president Maros Sefcovic for talks over changes to the Northern Ireland protocol. However, there was little sign of progress, with a commission spokesman saying: “It is now essential to find common ground between the EU and UK’s respective positions.”

Asked what France would do if Britain followed through on a suggestion by Frost that it could suspend parts of the protocol unilaterally using a mechanism known as Article 16, Macron declined to comment directly.

“We cannot play with this. It’s too dangerous,” he said of Northern Ireland. “There have been too many people killed.”

Johnson and Macron are set to speak on the sidelines of this weekend’s G20 summit in Rome to try to resolve the dispute.