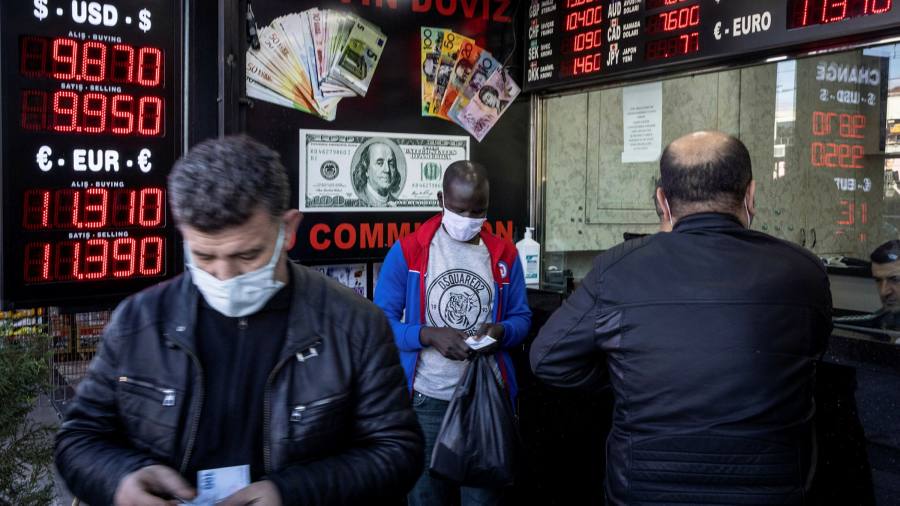 The Turkish lira suffered a historic retreat after President Recep Tayyip Erdogan praised a recent interest rate cut and declared that his country was fighting an “economic war of independence”.

The currency, which is down 45 per cent against the dollar this year, plunged as much as 15 per cent on Tuesday — a drop that eclipsed even Turkey’s currency crisis of 2018 — and broke through the symbolic threshold of 13 to the dollar after Erdogan used a combative speech to expound his vision for the country’s economy.

“It’s like a horror film,” said Enver Erkan, an analyst at the Istanbul-based Terra Investment, adding that it was hard to say how much further the currency would plunge given that policymakers appeared willing to simply let it fall.

“This is the inevitable consequence of Erdogan’s war on rates,” said Uday Patnaik, head of emerging market debt at Legal & General Investment Management. “The thing that would stop the freefall is some sign of an independent central bank in Turkey. But there’s not much prospect of that. Erdogan’s the type of guy who likes to keep doubling down.”

Erdogan, a life-long opponent of high interest rates, declared in an address on Monday night that he was “pleased” the central bank had cut rates for the third month in a row last week, despite warnings from economists that it would stoke inflation which is already running at an annual rate of 20 per cent and further destabilise the currency.

Painting a picture of a dark global conspiracy aimed at subjugating Turkey, Erdogan said the country would not give in to economists, “opportunists” and “global financial acrobats” calling for interest rate rises.

The government was prioritising growth, he said, in order to encourage investment, production, exports and employment. “That’s why we pay no attention to the clamour of the doomsayers,” he said.

He compared the struggle to the one the nation fought against foreign occupiers in the aftermath of the first world war, which culminated in the foundation of the modern Turkish republic in 1923. “With the help of God and the support of our people we will emerge victorious from this war of economic independence,” he said.

Turkey’s central bank, which has faced growing interference from the president, last month sought to argue that rate cuts would help to stabilise the plummeting currency and soaring inflation by erasing the country’s chronic current account deficit.

Economists warn that such logic is flawed, and say that allowing the lira to spiral risks creating hyperinflation in a country that is heavily reliant on imported energy and raw materials.

The sharp slide in the currency also threatens further eroding living standards at a time when Erdogan is already facing mounting public anger at the rising cost of basic goods.

One Turkish banker described the lira’s slide as “a policymaker-induced currency shock” that had been actively chosen by the government. “The choice is clear,” he said. “They are just implementing their strategy now. This is the new approach.”

Semih Tumen, a former central bank deputy governor who was last month among several senior officials sacked by the president, spoke publicly for the first time since his firing as the currency tumbled to call on the government to “abandon this irrational experiment that has no chance of success”.

He wrote on Twitter: “We need to immediately return to high-quality policies that will protect the value of the lira and the welfare of the Turkish people.”