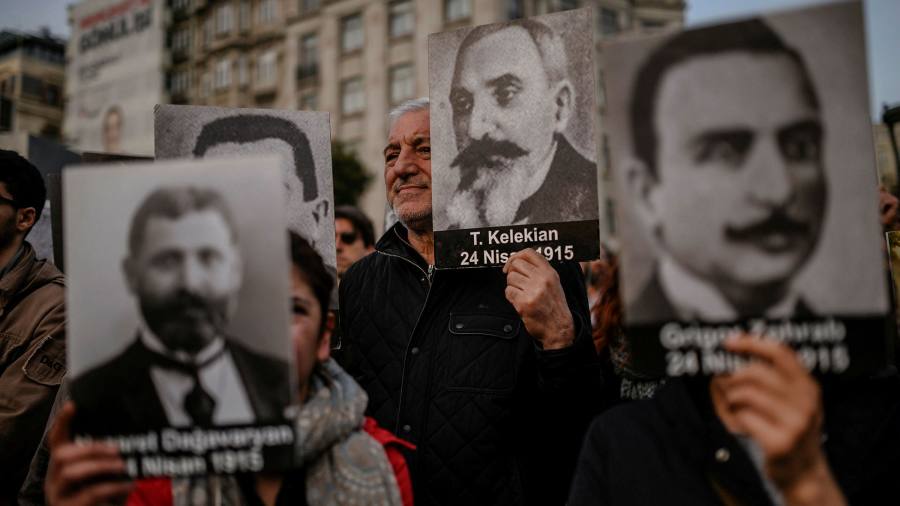 Turkish and Armenian officials have met in Moscow for the first round of talks aimed at normalising relations and reopening a border between the two countries that has been closed for almost three decades.

Both nations hailed the “positive and constructive atmosphere” after a meeting in the Russian capital between Turkey’s envoy Serdar Kilic, a former ambassador to the US, and Ruben Rubinyan, deputy speaker of the Armenian parliament.

They said they had agreed “to continue negotiations without preconditions aiming at full normalisation”.

The normalisation drive, the first since a previous peace effort collapsed in 2009, is not seeking to address the fraught issue of the Armenian genocide of 1915, which remains a source of deep acrimony and mistrust between the neighbouring nations.

Instead, the historic foes were prioritising a more practical, pared back approach, analysts said, with a focus on boosting trade and transport links as well as appointing diplomatic representatives.

The 300km Turkish-Armenian border was briefly open in the early 1990s when Armenia, a former member of the Soviet Union, declared independence after the collapse of the federation.

But Turkey closed the frontier in 1993 in protest at Yerevan’s takeover of an area near Nagorno-Karabakh, a predominantly ethnic Armenian region that is internationally recognised as part of Azerbaijan.

The fresh negotiations come at a time when president Recep Tayyip Erdogan, who has suffered growing regional isolation in recent years, is in the midst of a diplomatic push to improve relations with a string of former foes, including Saudi Arabia, the United Arab Emirates and Egypt, as his country reels from an economic crisis.

But the most significant driver of the detente, analysts said, was the surprise gains made by Azerbaijan, a close ally of Turkey and arch foe of Armenia, in the conflict that erupted in Nagorno-Karabakh in September 2020. Russia-brokered ceasefire terms, agreed in November that same year, handed Baku most of the land it had lost to Armenia in the 1990s.

This has reduced the incentive for Azerbaijan to disrupt the negotiations, as it did in 2009 when a previous Turkish-Armenian peace deal was abandoned.

“The situation is dramatically different from the previous round of engagement,” said Richard Giragosian, director of the Regional Studies Center, a Yerevan think-tank. “Azerbaijan is much less the obstacle because of greater self-confidence because of their victory in the war.”

While Giragosian described the aim of the latest talks as “bare minimum” normalisation, he added that, if successful, they could become the foundation for “a generation-long process of reconciliation”, which could address the deep wounds left by the deaths of up to 1.5m Armenians during the first world war in modern-day Turkey as the Ottoman Empire was crumbling.

Turkey rejects the term genocide. It denies that the deaths were caused by a state-orchestrated campaign and argues that many Turks also lost their lives in the huge upheaval and violence that marred the era.

Ahead of Friday’s talks, international observers had been cheered by signs of goodwill from both sides, which included the launch of direct charter flights between Istanbul and Yerevan. Armenia has given permission for a road and rail link to be built through its southern region to enable Azerbaijan to reach its exclave of Nakhchivan.

Nigar Goksel, Turkey project director at the conflict prevention organisation International Crisis Group, described the direct talks as “a very significant development”, but cautioned that they could falter.

She said that nationalists on both sides could spoil the talks. She also warned that Armenian prime minister Nikol Pashinyan, who won elections last summer despite overseeing the defeat in Nagorno-Karabakh, was eager to move fast, but Turkey was more cautious. “They don’t want a rushed process,” she said. “That could be one of the discrepancies between the two sides.”

This article has been amended since publication to make it clear that Turkey closed its border with Armenia in response to Yerevan’s takeover of an area near Nagorno-Karabakh, not Nagorno-Karabakh itself.