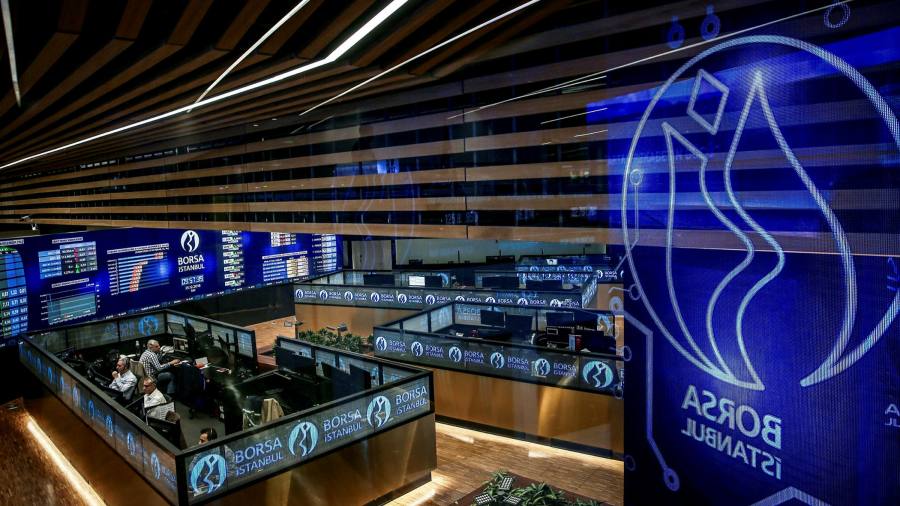 Borsa Istanbul announced a temporary so-called circuit breaker after its main Bist 100 index fell 5 per cent. After trading resumed, the benchmark was more than 8 per cent lower.

The selling came as the Turkish lira fell a further 7 per cent to a fresh all-time low of more than 17 to the US dollar, and a day after the central bank once again lowered interest rates despite an annual inflation rate of more than 20 per cent.

The lira has halved in value so far this year following a series of rate cuts, as President Recep Tayyip Erdogan — who rejects the economic orthodoxy that high interest rates rein in inflation — exerts increasingly close control over the central bank.

The stock exchange also said it had halted repo transactions in Turkish bonds as prices extended their recent decline. The yield on Turkey’s 10-year bond rose 0.3 percentage points on Friday to 21.5 per cent.

Turkey’s stock market has so far been largely insulated from the chaos engulfing the currency, with investors betting that a weaker lira is good for the country’s exporters. Even after Friday’s losses the Bist 100 benchmark is still up by more than 40 per cent this year in local currency terms. In dollar terms, it has fallen by 35 per cent.

However, the lira’s swift decline is likely to spark fears about the financial health of companies that have borrowed in foreign currency, or the possibility that Turkish depositors might begin to pull their cash out of the banking system, according to Ash.

“The moves in the lira are just so extreme. People are getting worried that we are reaching levels where debtors will have problems,” he said.

The central bank continued to intervene in markets in a bid to prop up the lira by selling foreign currency on Friday, with further signs that its monetary policy is unnerving Turkish businesses.

“We are astonished to watch the central bank, which cut interest rates yesterday, giving its precious foreign exchange resources to the market today,” said Erdal Bahcivan, head of the Istanbul Chamber of Industry, in a post on Twitter.

On Thursday, Erdogan announced a 50 per cent increase in the minimum wage in a bid to protect workers from rapidly rising prices, a move that economists warned would further fuel inflation.