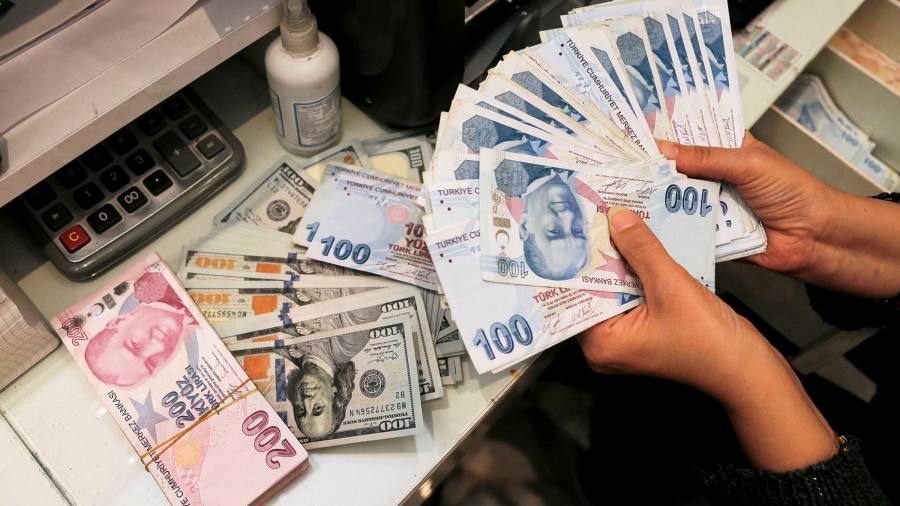 The central bank cut its one-week repo rate by 1 percentage point to 15 per cent, marking the third straight reduction in interest rates under governor Sahap Kavcioglu from 19 per cent at the start of September. The bank said many factors behind surging consumer prices were “beyond monetary policy’s control” and that it would “consider” ending its cycle of rate cuts this December.

The lira’s decline had eased to 3 per cent by the end of the London trading day. However, the currency has fallen more than 30 per cent this year — on a par with Turkey’s currency crisis in 2018 — as economists fret that low interest rates will worsen an inflation spiral, with consumer price growth having already reached an annual pace of almost 20 per cent in October.

“It’s mystifying why they would do this,” said Paul McNamara, an emerging market investor at GAM in London. McNamara said some aspects of Turkey’s economy looked encouraging as the country recovered from the pandemic. “The only driver for a weak lira is the policy outlook,” he said.

Turkey’s central bank has been under intense pressure from Erdogan to loosen monetary policy despite blistering inflation. Lower rates — and a weaker currency — tend to worsen inflation because it increases the price of imported goods, creating a vicious cycle.

“I’m sorry to our friends [from the ruling party] who defend [high] interest but I cannot and will not walk the same path as them,” he said.

The central bank on Thursday laid blame for the elevated inflation on “transitory effects of supply-side factors” including high global food and energy prices, which it expected to last into the first half of next year.

It said many advanced economies were continuing to pursue monetary policy stimulus, partially on expectations that the surge in global inflation would prove to be fleeting in the medium to long term.

But Turkey’s loosening of monetary policy leaves the country as an outlier at a time when many other emerging markets are raising rates. Both South Africa and Hungary announced rate rises on Thursday. The US Federal Reserve, the world’s most influential central bank, is also reducing its stimulus measures, something that has placed emerging markets under more pressure to increase interest rates to attract investment.

Erdogan has faced mounting calls from the opposition and the Turkish business community to set aside his obsession with rate cuts in order to tame inflation and stabilise the currency, whose slide has been eroding standards of living.

“Now STOP, Erdogan!” Kemal Kilicdaroglu, the leader of the country’s largest opposition party, said in a tweet in response to Thursday’s decision and repeated his demand for Turkey to go to elections.

The rightwing IYI party, which has been enjoying growing support in the polls, accused Erdogan of “bankrupting” the country.

“The reasons that are causing a currency crisis right now are not macroeconomic per se. It’s the decision-making system that gives Erdogan endless authority,” said Umit Ozlale, one of the party’s vice-presidents. “Whatever he wants is done. That’s why we’re in this crisis. This is a decision-making crisis.”

Jittery markets had been further unnerved by an item published overnight in the country’s official gazette relating to foreign currency transactions at Turkish bureaux de change.

Turkish officials dismissed frenzied speculation on social media that the move was a sign of impending capital controls. They said the directive was a small technical change to a previous requirement for citizens to show identification at foreign exchange offices, arguing that it was actually a liberalising measure that lifted the minimum transaction amount for such a requirement to $100.