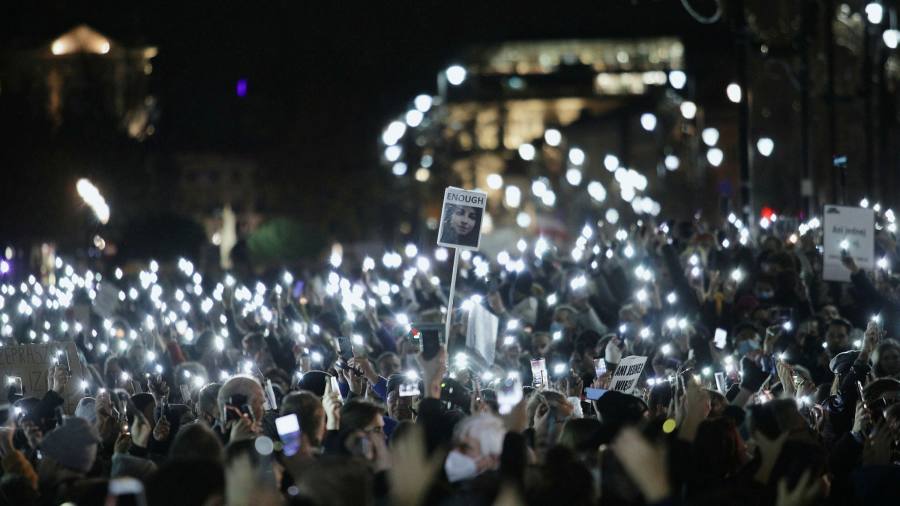 Thousands of Poles took part in vigils and marches on Saturday following the death of a pregnant woman whose case has reignited a debate about the country’s highly restrictive abortion laws.

In the capital Warsaw, thousands marched through the city centre, bearing placards with slogans such as “My body, my choice”, and “It could have been any of us”, and chanting “Not one woman more”, and “Shame!”

Smaller protests and marches also took place in other towns and cities, including Gdansk, Wroclaw, Szczecin and Pszczyna, the town in southern Poland where the woman died.

The 30-year-old, identified only as Izabela, died after going to hospital in her 22nd week of pregnancy when her waters broke. Her family said in a statement that she had told them that doctors waited for her unborn baby, which had congenital defects, to die rather than perform an abortion. The foetus died, and after less than 24 hours in hospital Izabela died from septic shock.

Izabela’s death follows a controversial ruling last year by Poland’s constitutional tribunal that a 1993 law allowing abortions in the case of severe foetal abnormalities was unconstitutional.

The ruling, which sparked huge protests across the country, tightened what were already some of the most restrictive abortion laws in the EU and left only two grounds for a termination: a threat to the mother’s health or if the pregnancy is a result of rape or incest.

Politicians from the ruling conservative-nationalist Law and Justice party, which has close links to Poland’s influential Catholic church, said that those rules would not have prevented an abortion from being carried out in Izabela’s case.

“If the life or health of the mother is threatened then an abortion is still possible, and here nothing has changed,” Mateusz Morawiecki, Poland’s prime minister, said this week.

However, women’s rights activists say that the tightening of the laws has made doctors afraid of carrying out abortions, even if there is a risk to the mother’s life.

“The situation is getting worse and worse . . . By slowly taking away women’s rights step by step, they are being taken away completely,” said Ola Wlodarczyk, a 32-year old who joined the march in central Warsaw.

“We want our rights, our rights to our own bodies, back. The right to abortion is a fundamental human right . . . [This case shows] that these aren’t just slogans on placards and empty chants on the streets. It has a direct impact on women’s life and health.”

The hospital in Pszczyna said on Friday that two doctors who had been on duty while Izabela was in the hospital had been suspended.

In an earlier statement, it said that “all medical decisions were made taking into account the legal provisions and standards of conduct in force in Poland”.