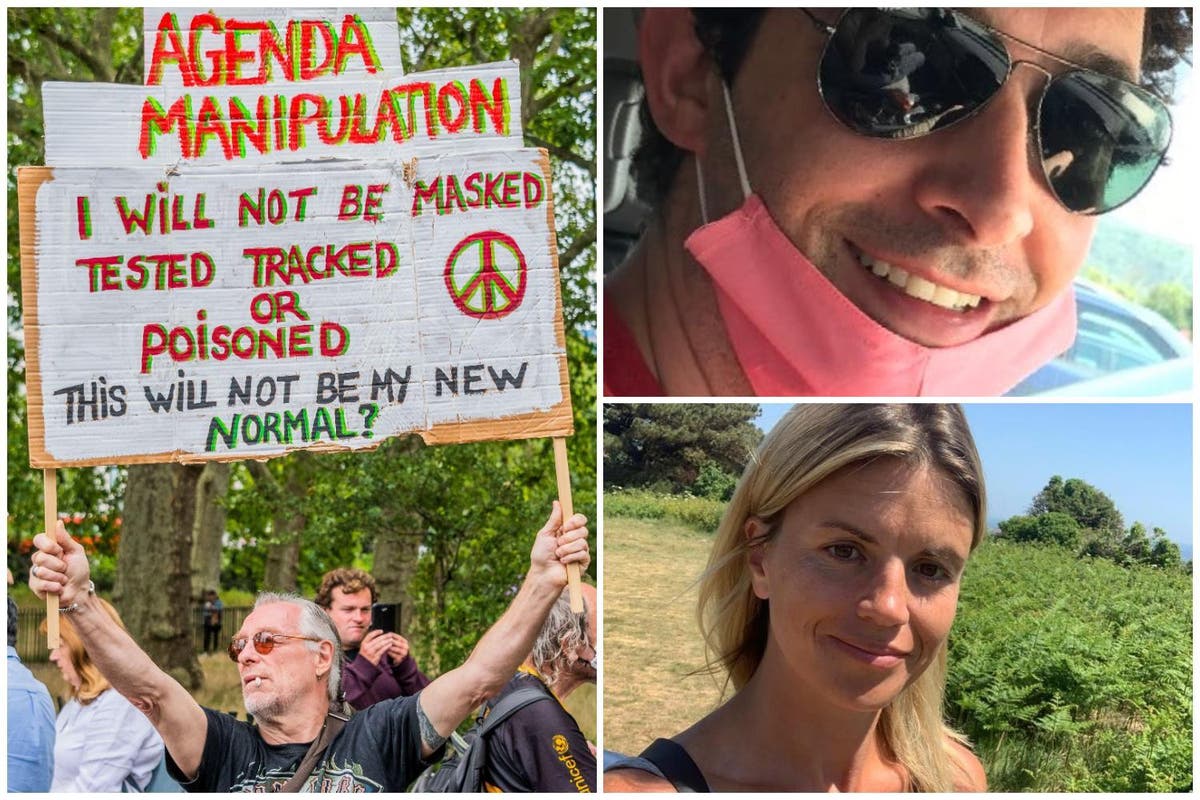 artin Richards*, 21, laughs when I ask him if he wore a face covering to travel to the anti-mask rally in Islington last Saturday. He says he did, in front of wardens on the train to London from his mother’s home in Berkshire, where he is living for the holidays. “I took it off as soon as I was in the ­carriage.”

The Imperial College maths student, chairman of the university’s Conservative Association and a former Countdown whizzkid, insists he’s not “anti-mask”, but anti-mask enforcement: specifically, the law that requires the wearing of face masks inside shops in England from tomorrow. Richards says he’ll carry one with him to avoid the £100 fine, but he won’t wear it inside unless he is asked to by ­shopkeepers.

“It’s anti-social distancing and we must call it out,” he told protesters holding “RIP free speech” and “masks are muzzles” placards at a rally in Lewisham the previous weekend. A week later, 300 fellow demonstrators made front-page news as they marched in plague masks and cut-out face coverings across the capital in Hyde Park. Richards wasn’t there because he didn’t know it was happening, but he would have gone if he had.

Richards’ reasons for calling out the Government are multi-faceted — economic, for fears of small businesses going under, and as a matter of holding them to account — but his central argument is the most well-trodden among lockdown sceptics: one of civil liberties. Like the hundreds who attended the marches up and down the country last weekend, he believes that being forced to wear a face covering violates our human rights and is a crackdown on our freedom as British citizens. We are not “anti-mask”, he and his fellow protesters insist; we’re “pro-choice”.

The pro-choice rhetoric has historically been associated with the abortion debate, but it has quickly become a slogan for the growing culture war against state-mandated lockdown restrictions in the pandemic. And its battleground reaches far beyond the boundaries of Hyde Park and Angel station. Sweden has become a nation of Covid contrarians, steadfast in its decision not to play by the rules and lock down, while in the States the face-mask debate is growing ever more polarised. President Trump has U-turned on his mask scepticism, pictured wearing one for the first time this month and now encouraging Americans to follow suit “whether you like the mask or not”. But many of his citizens, mostly Republicans, remain opposed, rallied by a small but impassioned minority of Covid sceptics including billionaire SpaceX founder Elon Musk and former New York Times reporter Alex Berenson.

Across the Atlantic, London’s Covid contrarian-in-chief might not have written a book, but he certainly has a Twitter presence to rival Berenson’s. More than 46,000 people now follow Simon Dolan, 51, the millionaire businessman leading the UK’s battle against the lockdown restrictions via his campaign group Keep Britain Free. In April, the British aviation tycoon launched a High Court bid to overturn the “draconian” lockdown measures after crowdfunding £200,000 from 6,500 people. The bid was unsuccessful earlier this month, but Dolan and his barrister, Francis Hoar, have appealed it. They should hear the results any day.

“I’m a contrarian by nature,” Dolan tells me cheerfully, from the Monaco apartment where he has spent lockdown with his wife, Sabrina. He is charming on the phone, asking about my lockdown and wishing me a lovely evening — a contrast to his fierce Twitter personality.

Dolan insists he is not political. He is conservative with a small c and has never voted (“I genuinely have a huge disrespect for almost all of them”). For him, it’s about holding the Government to account. “I can’t sack [the Government] because I don’t employ them,” he tells me. Instead, he took the only route he saw left. Together with Hoar, he took them to the High Court.

Dolan speaks eloquently and lists his objections calmly: he doesn’t think masks “work” in defeating the virus and even if they did, he believes the pandemic is “finished”, so it would be “ludicrous” to mandate them now. His evidence that the virus is “over”? The number of deaths and new cases in the UK, he says.

Then there is the argument about the physical masks themselves: the country is divided enough already, and masks are just another “artificial antagonism”, says Dolan — just look what they cover up. Hendon shop owner Irina Bragin, 55, believes masks are a silencing tool by the Government: “there’s another financial crash coming and they need us to be quiet.”

Why are they destroying the economy for a low-mortality illness that seems akin to flu, asks one Covid contrarian

Many contrarians, particularly those in their twenties and thirties, state economic reasons. Dolan and Richards believe the inconvenience of wearing a mask will put people off going to shops and restaurants and “finish off the economy”, while others believe too much weight has been put on health concerns over financial. “Why are they destroying the economy for a low-mortality illness that seems akin to flu?” asks Lara Crabb, 33, a communications manager from Shepherd’s Bush.

But Dolan and his contrarian army’s main objection is being told what to do. London Assembly member David Kurten calls the mask enforcement “creeping totalitarianism”, while Alex, a 32-year-old PR consultant who has worked on Dolan’s campaign, believes enforcement of such a law on to a population like the UK is “morally wrong”. He has worked in Russia, Ukraine and China over recent years and is used to being “lied to” by the government, but he did not expect it in his home country. His mother in Kent disagrees, but “she hasn’t had to live in Stockwell from March 23 working every day from her dining room table”.

It’s simple human rights, Dolan continues. “If someone wants to wear a mask then I’ve got no problem about that, any more than I do about what colour hat they wear or if they wear one at all.” What about mask-wearing to protect others? Mask-supporters argue that non-compliance is a “deliberately selfish attack against the community,” but Dolan insists this rhetoric is a “psychological trick” and a “guilt-trip” by the Government. By the same logic, surely it’s selfish to drive a car, given the risk of running someone over, he argues. “Of course it’s an absurd argument, but no more absurd that the ‘you’re killing us if you don’t wear a mask’ argument.”

But even among the contrarian army, there is division among the ranks. Extremists at Sunday’s protest carried placards saying “no to 5G” and “no to vaccinations”, while other members have accused such “conspiracy theorists” of distracting from more moderate arguments. “It’s frustrating,” says Louise Creffield, 34, who founded 2,000-strong Facebook campaign group Save Our Rights UK and made a speech at Sunday’s Hyde Park rally. Her message was all about free choice, but she believes the outcries about 5G stole attention from what was a “clear” argument.

“The problem with these groups is because the tent is so broad, you get some of the cranks thrown in with it,” agrees Richards, who says he left Saturday’s “tin-foil hat protest” early after seeing a placard accusing Bill Gates of wanting to insert microchips into the population.

Richards says he would feel more reassured if heads of state and Cabinet members took the vaccine first, while PR consultant Alex says the anti-vax brigade are outright “stupid”. “Medically I think face masks and vaccines obviously work,” he says. It’s just their enforcement he has a problem with.

Like the majority of his fellow anti-maskers, he wants conversations to be civil but believes the topic does need debating. Dolan says he’s nervous at the thought of his appeal being turned down by the High Court because “that means the Government can do this again whenever they like” and he doesn’t want to live in a country where lockdowns can be enforced at any point. “It’s their choice,” he says, plainly, of people who want to wear masks. “All we want is the same courtesy — a choice.”