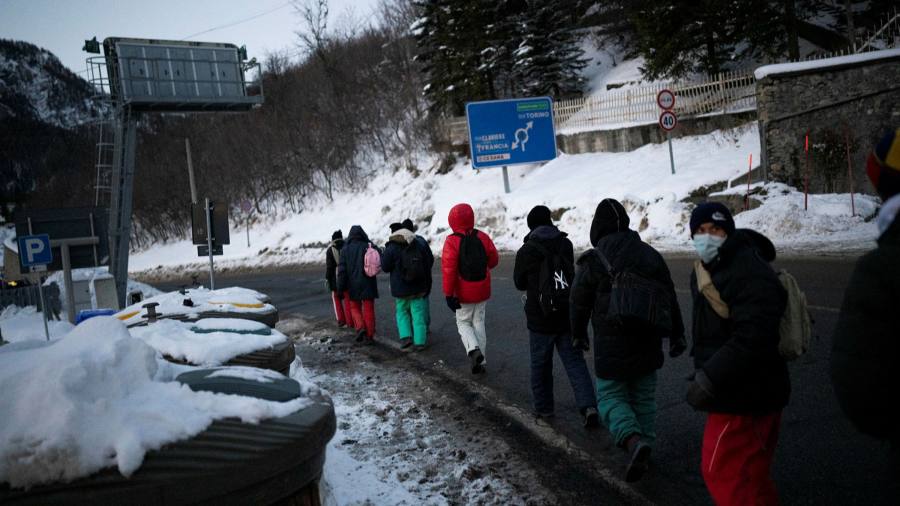 By day the snow-clad hills around the Italian town of Claviere on the French border are a playground for skiers. By night they become a perilous Alpine passage for growing numbers of clandestine migrants trying to reach France through the Montgenèvre pass.

“Mountains, in the snow, in rain, sun . . . no matter. We don’t have any choice,” said Maryam Bodaghi, a 23-year-old civil engineer from Iran, who was attempting the journey through the Alps with her husband Milad Zanghi, a Christian who Bodaghi said faced persecution at home. “We had to leave because the government is harsh for us. They want to kill my husband.”

Like many of the migrants using this route, she and her husband are headed for Calais because they intend to cross the Channel and reach the UK. But first they must cross the French border. This means walking for about 15km through knee-high snow as temperatures drop to minus 10C, while hiding from the French police and watching out for avalanches. Accidents have led to amputations from severe frostbite or death by hypothermia, according to NGOs.

Many migrants return cold and exhausted to the Fraternità Massi refuge in the nearby Italian town of Oulx. “I could die up there. I had snow up to my hips,” said a Moroccan man in his thirties. He was caught and turned back by the French police after walking for three hours. It was his first attempt. Most make it on their second or third try.

The Montgenèvre pass is becoming a key route into France for migrants travelling on to Germany, the most common destination, or the UK. At first it was used mainly by west African men, but since spring last year it has been used more frequently by Afghans and Iranians escaping economic hardship and persecution. They have often travelled for months on foot since arriving in Europe.

The Alpine crossing is just one part of an arduous journey that aid groups say often takes between two and six years. The migrants include families spanning three generations, heavily pregnant women and infants.

“Recently, we had two pregnant women crossing. One was due the day after and one was due the following month,” said Sylvain Eymard, who manages Les Terasses Solidaires, a centre which hosts a migrant refuge and other NGOs in Briançon, the nearest town on the French side of the border.

The centre estimates that nearly 5,500 people arrived between January and September — up by around 30 per cent from the previous record for the same nine-month period in 2018.

France has increased policing in the area, sending two extra squadrons including about 220 paramilitary officers to protect the border. The growing stream of migrants is an issue for the government, which is already facing pressure from the UK to curb cross-Channel attempts after 27 people died when a boat capsized in November.

President Emmanuel Macron, who hopes to secure a second term in April elections, is also trying to convince voters swayed by far-right candidates Marine Le Pen and Eric Zemmour that he can be trusted to control what many see as uncontrolled mass immigration into France.

On the Italian side of the Alps, French moves to limit immigration are met with scepticism. Andrea Terzolo, the mayor of Oulx, said: “I’m very scared about the next election in France. If something changes, here can really become a new Calais.” More migrants arrive every day in his town of roughly 3,000 people, which relies heavily on tourism, and Terzolo said current policies are endangering migrants rather than reducing the flows through the region. “There are policemen, gendarmes, the army everywhere, but somehow they [the migrants] pass,” he added.

The sentiment was shared by Silvia Massara, a volunteer who helps run the Fraternità Massi refuge. “People without a leg, children with a disability, really elderly people. All of them manage to cross in some way,” she said. “The people who are being turned back put their lives in danger many times instead of just once.”

The mountain pass has claimed five lives and two people have been reported as missing since migrants started using the route five years ago, said NGOs. The real number could well be higher. Volunteers say the increased police presence encourages migrants to take more treacherous paths to remain hidden.

“It’s getting very, very dangerous. This is a huge territory. If someone is out of the recognised way, it’s very difficult to look for them,” said Michele Belmondo, co-ordinator of the Italian Red Cross in the Susa Valley. “Sometimes we look for people in the mountains . . . and maybe in spring we find the bodies.”

Migrants who get into difficulties can call emergency services. But they rarely have Sim cards in their phones, making the calls difficult to trace. Surrounded by trees and snow, many find it hard to describe their whereabouts.

The pandemic has made the journey more difficult. Covid passes are mandatory on all public transport in Italy and on longer journeys in France. They cannot leave Briançon without proof of a negative Covid test. But snowfall, public health restrictions or stricter policing does not deter them — many have crossed a dozen borders, paid thousands of euros and taken years to get this far.

Sayed Ahazia Mosolli, 36, left Afghanistan eight years ago. He crossed the Montgenèvre pass in December with his six-year-old son, who he wants to give a new life in Germany.

Like Mosolli, Bodaghi and Zanghi reached Italy from the Balkans and Turkey but see the UK as their only option. They had been in Europe for months before being caught by police in Slovenia, who took their fingerprints. If they apply for asylum in another EU country such as Germany, they risk being sent back to Slovenia under European rules about the country of first arrival for an asylum seeker.

“We have to go to the UK with the boats like other people,” said Bodaghi.