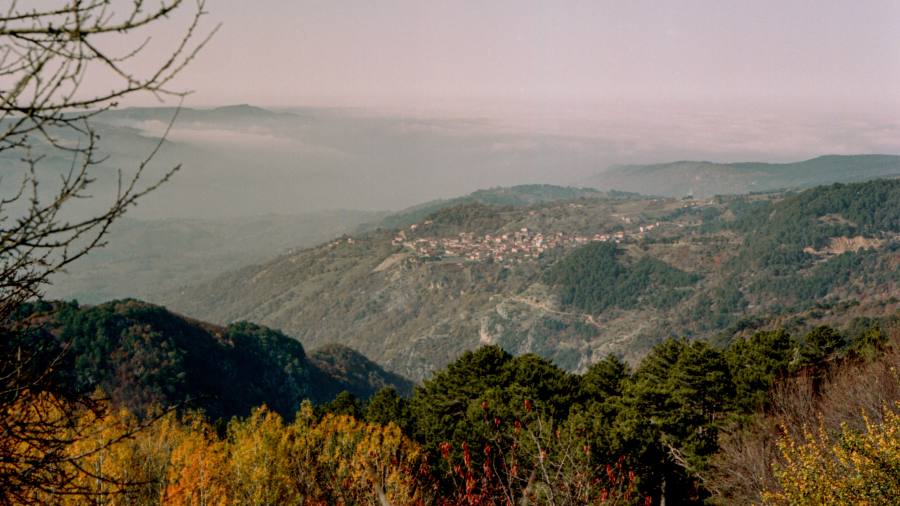 Below Turkey’s snowy Mount Uludag, the Ay family are collecting chestnuts. They toss handfuls into wicker baskets, each nut brown-bellied and lustrous as lacquer. Their pace is brisk because the gathering season is short, mid-October to mid-November, with every day getting colder until skiers take over the mountain.

I follow Mesut Ay past quince and medlar trees, the air chilly and clean, the garden wet and glistening. The family have lived here for generations. They are small-scale traders, selling just 250 kilos a year, a minuscule portion of the 60,000 tonnes that Turkey produces as one of the world’s largest chestnut-yielding countries. Yet the Ays’ mountain nuts are prized so highly that dealers travel to them from Istanbul, three hours by car.

As we talk, fat burrs drop heavily around us, delighting a pair of fossicking mountain puppies. In Turkish, chestnuts have the nickname kirpi, meaning hedgehog. Mesut’s father Mustafa insists that the burrs, spiky as sea urchins and green as AstroTurf, fall naturally from the trees, rather than being thwacked by sticks. There is less damage that way. Whacking is only for hardier walnuts.

Nazire, Mesut’s mother, approaches with a brimming basket and tells me that chestnuts have always been a part of her life. When she was little, she’d sign-off letters to school friends with a cheery ditty, “kestane kebap, yemesi sevap, acele cevap”, which in Turkish rhymes nicely and in English translates roughly as “roasted chestnuts, good to eat, write back quickly”.

In Britain, chestnuts tend to be reserved for festive tables, with sprouts, for example, or used for stuffing. Yet they are extremely versatile: delicious fried in butter with marjoram, stirred into risottos, or mixed into soups and stews as they do in France, Spain and Portugal.

They have been part of Turkish culture for thousands of years. Chestnut trees flourished in ancient Sardis, the Lydian capital in western Anatolia. In ancient Greece, the thinker Diphilus called them “Sardis-acorns” and considered them nourishing and flavoursome; the physician Mnesitheus of Athens warned that digesting too many encouraged wind. The Romans renamed the nuts castanea, which gives both the modern Turkish name, kestane, and the English botanical name, Castanea sativa. Today, Turkish chefs anticipate their arrival much like British chefs look forward to asparagus season. They are tucked into cabbage leaves, dashed through lamb pilaf, mixed into helva and crumbled into ice creams.

In the industrial city of Bursa, below Mount Uludag, come cries of “kestane, kestane!” (“chestnuts, chestnuts!”) from competing vendors. Chestnut smoke wafts among the faithful filing out of Ulu Camii, the Great Mosque with its 20 domes, and drifts past shops selling ribboned boxes of candied chestnuts. Of these shops, none can compete with Ulus. It’s like stepping on to the set of a Wes Anderson film.

Established in 1928, some customers may come for lokum (Turkish delight) but most queue for candied chestnuts, especially in winter when their sweet, rich caramel scent fills the air from the workshop out the back. All around are portraits of the late founder, Rasim Oztat, dressed in a heavy black wool coat and polished shoes. Behind the counter, by the original cash register, Akile Oztat recalls her father-in-law with reverence. “Arriving from Yugoslavia as a small boy, he began selling sweets in the bazaar, from a tray carried on his head,” she tells me. “At first people teased him and his chestnuts, but his business grew until the reputation of Ulus was such that Ataturk had chestnuts from us.” I bite into my first candied chestnut. Fudgy, syrupy, filling and indulgent, it is just right for winter.

When skiers return from Mount Uludag, it is traditional to take home a souvenir box of candied chestnuts. This is when the Kardelen (“snowdrop”) factory, specialising in decorated tins and fancy boxes of candied chestnuts, does a roaring trade. In the factory garden, filled with persimmons, I meet co-owners Deniz Utku Ozdemir and Mumin Akgun. There is little the pair do not know about chestnuts.

“Marrons glacés are considered a French commodity everywhere in the world except Turkey,” says Ozdemir, who is originally from Ankara. “It’s a misconception that we took the idea from the French. Consider it like this, if you have strawberries in your country, eventually you’re going to make jam. If you have meat, you’ll cure it. Firstly, it’s a method of preservation. We don’t need a debate or to try and prove this.”

Since 1991, Kardelen has been booming, exporting to Italy, the Gulf states and even Parisian supermarkets. “We have polarised France a little,” Ozdemir continues. “Young people love our fresh-tasting candied chestnuts, with less sugar and a stronger chestnut flavour. But some senior citizens oppose the idea of altering an iconic sweet, even a tiny bit.”

In wintry Istanbul, fog swirling among ferries and minarets, the boza sellers are out, a sure sign of the season. Boza, a thick custard-coloured fermented millet drink, topped with dried chickpeas and a dusting of cinnamon, is fortifying and I carry a plastic cup of it, under a liverish sky threatening rain, towards the smell of chestnuts.

By Kadikoy port I find Fikret Gunar and his uncle Sabri Akkaya, from the Black Sea city of Kastamonu, who source smaller, wild chestnuts from the forests around their hometown. Between them, they’ve been roasting chestnuts with a mangal and some charcoal on this very spot for 75 years. “Join us for tea,” says Gunar, sliding a warm chestnut into my hand. As I nibble on it, they dismiss Bursa’s famous nuts, as proud Black Sea men might. “Bursa’s chestnuts just don’t open as nicely, they’re only good for candying,” says Gunar. Not everyone would agree. In the 17th century, the great scholar and traveller Evliya Celebi noted that Bursa’s chestnuts were unrivalled in all the world.

A nut is never just a nut. Rather it’s a resource and a possibility, a promise even

One chef who impatiently awaits chestnut season is Musa Dagdeviren, best known for Çiya, his string of restaurants in Kadikoy, and lately for appearing on the Netflix documentary series Chef’s Table. Dagdeviren is a hunter-gatherer of lost Turkish recipes. He conducts field work much like an archaeologist on a dig — no village is too remote, no weed, spice or seed dismissed. At Çiya, you might find blessed thistle, hemp seed or turkey testicles on your plate. Dagdeviren arrives at lunchtime, wearing wire spectacles, a thick plaid shirt and a tweed waistcoat. Like the nearby roasters, Çiya’s chestnuts come from the Black Sea region. “Small Black Sea chestnuts, growing wild between old oaks, are the very best. No preservatives, no pesticides, straight from the tree to the table,” he begins. “If they go into storehouses, worms can be a problem . . . As the season is just 30 days, people get very disappointed if they’re not available.”

As we talk, good things come to the table, including lamb meatballs with chestnuts and peppers, first roasted collectively over a coal fire, then cooked again in pomegranate juice. Last week, they had a dish of quince, apricots, chestnuts and lamb. In the past, they had a sublime salad of chestnuts with basil, parsley and spring onion dressed in olive oil, as well as a dessert in which the nuts are first wrapped in a cloth pouch, then boiled in lemon syrup before being served with cinnamon sprinkled over it.

Dagdeviren sighs as he recalls a Kurdish recipe found by the border of Iraq, a fortifying barley soup of lamb and chestnuts, all but forgotten now. “The problem is that food is not protected like other areas of culture. It takes centuries for a cuisine to develop, yet it can all too easily disappear,” he says.

As we finish talking we agree, somewhat philosophically, that a nut is never just a nut. Rather it’s a resource and a possibility, a promise even. I slide the plate of meatballs towards myself. The sweet-tart pomegranate with smoky lamb is beautifully harmonious, and the hot chestnuts scattered through are comforting. It is a simple but extraordinary dish, as marrow-warming as a fireside whisky on a winter’s night.