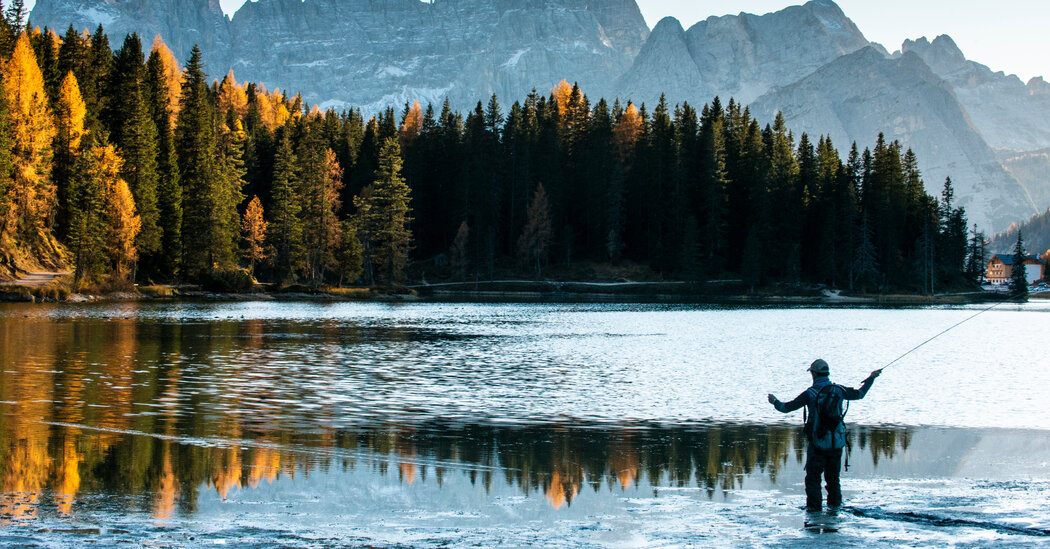 On an early morning in late autumn 2019, I drove with two friends from my family’s small rural home in Northern Italy toward the town of Bassano del Grappa, where we would meet our fishing guides. The car axles whimpered through each turn. The road was flanked by walls of dolomite, valley floors of grapevines and verdure.

Passing through villages with roads no wider than toothpicks, we intersected the Brenta River several times, crossing old wooden bridges and new steel overpasses with the water breaking below. The river wriggles from two serene lakes in the Trentino-Alto Adige region in the Italian Alps, and after more than 100 miles dismisses itself into the Adriatic Sea.

After an hour’s drive we made it to the river bend where we would fish that day. The sun hardly crested the horizon. It was only in this very specific stretch of water outside Bassano that we were allowed to fish, a condition of the country’s strict permitting and controls on fishing. The regulations make for good fishing and a protected river ecosystem.

Italy never appears on lists featuring the world’s best fishing locales. Wyoming? Definitely. Argentina? Naturally. New Zealand? No question. But the wonder of Italian alpine fishing is now making itself known thanks to tourism campaigns launched in the last five years and an explosion of guides offering tours that blend traditional fly fishing with cultural outings.

Aside from the cool factor of accessing backcountry tributaries near Roman ruins and the packed lunch that is likely to be haute if low-key, the wonderment of Italian fishing is threefold: the accessibility (although permitting is painless for guests and residents alike, the rules are extensive), the abundance (recent fishery management efforts have made the waters of Northern Italy a trout heaven) and the rolling seasons (lake trout and chars from January to October, rainbow trout from February to October, graylings from May to October and pike from May to December).

But the real beauty may be this: “The fisherman can say, ‘We’re going to Italy!’” said Angelo Piller, who operates a fly fishing lodge, tackle shop and guiding service in Pieve di Cadore, about two hours north of Venice. “He can fish and the rest of the family thinks they’re just going on vacation.”

When we arrived in Bassano we walked along the water’s edge across a path trussed by stone walls. To get to the Brenta, we had to first climb a stone wall and then lower ourselves into the brackish river water.

Fly fishing is most associated with waders, hats pricked full of hooks resembling various insects and artful wrist work. But this was more. As the water reached my chest, I walked further into the river. Downstream was the Ponte Degli Alpini, a covered wooden pontoon bridge whose earliest version dates to the 1100s and is named for the Italian mountain military forces. I could see lines forming outside the Nardini Distillery, where soon we would see patrons clutching shot glasses of grappa and steins of cider. Beyond the waterline breached a series of turrets, a castle keep and curtain walls.

Fly fishing uses a rod with artificial bait with a hidden hook, known as a fly. A shiny, colorful fly is cast into running water (a river or stream) and sunk and reeled to attract fish, mimicking the appearance of another insect or prey. Attached to the fishing line is a buoy, which helps an angler know when a fish is nibbling; a split shot weight, which helps adjust the water depth of the fly; then the fly itself, independent of the other two parts.

The buoy and split shot work in tandem to offer more forgiveness when the fly is cast into a stream or river. Adjustments can be made to lower or raise the fly, and when a fish bites, the angler knows when to yank on the line.

I had thought myself a decent angler, acquainted with what I believed was the only fly fishing technique, until Matteo de Falco, our guide, handed me a 10-foot pole and wished me a good first cast. I looked at him, bewildered. The pole was massive, much longer than the 8-foot poles I most often used.

Many anglers who fish in the Dolomites do so using a method dating back to the late 19th century and adapted from an old American technique known as nymphing, after the type of flies needed to angle in shallow waters.

The first written mention of the technique was in the 1920s, according to George Daniels, the lead instructor of the Penn State University fly fishing program, who teaches angling courses and operates a full-time guiding and fly fishing educational service called Livin On The Fly. Frank Sawyer, the creator of a popular fly called the Pheasant Tail nymph, wrote about using an 11-foot pole with especially long leaders (the business end of a fishing line, difficult for fish to see and where flies are attached) while fishing in English chalk streams. The technique was called European nymphing. “The tactic is so good that many anglers do nothing but Euro nymph,” Mr. Daniels told me.

The European nymphing technique is not about stalking a trout in a slow pool, standing for hours waiting for the fish to meet a fly. It is more aggressive, faster action, throwing many casts in fast water right on a fish, never patient, always hunting.

In Patagonia, I once caught trout using only a tin can spooled with fishing line. In Alberta, Canada, I have thrown the wriggly line of a regular fly fishing rod at gin-clear waters for what felt like hours without the slightest hint of a bite. This nymph technique was otherworldly.

“The technique is special and has started to become more famous because you can fish lower with a small fish, lighter flies, good sensitivity and the possibility to attach two flies,” Diego Riggi, a well-known fly-tier and guide, said from his home office in Tre Ville, 2,707 feet above the Sarca River in Trento-Alto Adige. In 2019, he sold 12,000 flies across greater Europe through his website Mosca Tzé Tzé.

European nymph fishing is fishing by feel: no strike indicator, no split shot, but a longer leader and two or more faster-sinking flies. An angler feels the tension of the line, is more connected to all that is happening beneath the surface and is largely in charge of the progress of the fly as it transits downstream. It is more difficult, but some anglers argue that without all the trappings of “advanced fly fishing,” this holistic method yields better results. It is also the international standard for competitive fly fishing, where the use of strike indicators is typically forbidden. An overly simplified explanation of European nymph fishing is this: It is a pared-down, purist fly fishing technique, stripped of devices that do the fishing for an angler.

We had a successful morning, catching brown trout, graylings and a hybrid between marble and brown trout, all of which we released back into the stream. It seemed like each time Mr. De Falco cast his line he landed it near a fish, somehow getting strikes on his line like a commercial fisherman wielding a net.

Erik Sanders, an American who acts as a liaison for foreigners seeking to discover Italian fly fishing, had connected me with Mr. de Falco, telling me that “he has the ability to sense where fish lie. He happens to be 10 percent marble trout.”

Around lunchtime we climbed out of the water and sat for a meal overlooking the Brenta, which felt like a cool breeze at our backs. As our second guide, Riccardo Nalin, prepared a lunch of salami, asiago and beans with sausage, Mr. De Falco handed out glasses of cabernet. Mid-pour he stopped and pointed out a chub floating nearby, calling it a “bastardo” and launching into a tirade about the nuances of catching a “very smart fish.”

Local guides like Mr. De Falco proliferated in the years before the pandemic. Guides are easy to find through a quick online search and cost between $300 and $400 per day per person (which includes lunch, but not the rental of waders or boots), with discounts for groups and bookings longer than three days. Companies like Orvis have started to promote lodges and guides in the region. Global travel restrictions devastated the local guiding community, whose clientele are largely foreigners. The guides did continue fishing on their own, for pleasure, and their calendars are now filling up as visitors from the European Union, the United Kingdom and North America return.

As we ate, we watched Mr. De Falco cast his line from the observation deck where we sat overlooking the river. He dipped the line into the clear water, viewable straight to the rocky bottom. He trailed the fly in front of a trout, which bit. Mr. De Falco yanked the line and brought the fish to us before tossing it back. He celebrated over grappa and coffee from a percolator set atop a small butane stove.

The stradas running along the river were busier now. Men in waders stopped to ask Mr. De Falco about his Sky Italia television show, “Pesca TV,” and sought advice on the fishing that day. He knew everyone. More important, he knew where to find us more fish.

The sun crept out of sight. Near the end of our river walk, one of my friends had launched the telescopic tip of his rod into the water, separating it from the rest of his gear. Two of us had gotten our lines tangled after a miserable cast. The storefronts, having closed for the Italian lunch hours, were reopening and shoppers had emerged in the streets.

On other days of fishing, we would stop at the distillery, where they were serving rhubarb bitters and the signature grappa infused with juniper, licorice and other flavors, or eat our lunch of polenta inside a 300-year-old home, near the wine cellar.

But this afternoon, we simply moved upstream, away from the old bridge.

And, ecco (the Italian equivalent of voilà), fish!

Kenneth R. Rosen is a writer based in Italy. He last wrote for Travel on the reopening of the Hotel Saranac.