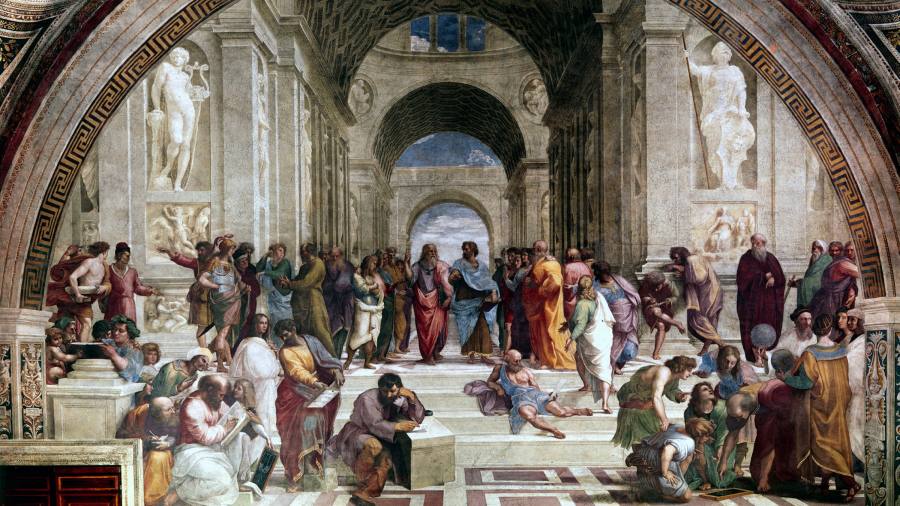 Hellas: A Lyrical Drama, composed soon after the Greek war of independence broke out in 1821, is not generally considered one of Percy Bysshe Shelley’s best poems. But the preface to the poem contains the most succinct, powerful summary in the English language of the debt that western civilisation owes to the ancient Greeks. “We are all Greeks,” Shelley wrote. “Our laws, our literature, our religion, our arts have their root in Greece.”

More than 150 years later, French president Valéry Giscard d’Estaing made the same point when he issued a passionate plea for Greece, newly liberated from military dictatorship, to be brought into the European Economic Community, later the EU. “What is Europe without Plato?” he asked.

Western European and American admiration for ancient Hellene culture played an indispensable part in ensuring that an independent Greek state emerged from the ferocious struggle against Ottoman overlordship in the 1820s. The Greek cause was in dire trouble until the British, French and Russians destroyed the Ottoman fleet at the battle of Navarino in 1827 — “the last great naval battle of the age of sail”, as Mark Mazower puts it in The Greek Revolution. Each great power had its own motives for intervention but, for philhellenes everywhere, to support the Greeks was to support liberty, justice and civilisation itself.

Greek independence set a precedent that resonates across two centuries of European history up to the present day, Mazower says. From Italy and Germany in the 1860s and 1870s to Montenegro and Kosovo in the past 15 years, the formation of new nation states, big or small, has been a consistent theme of Europe’s political development. Yet the history of Greece is not the same as the history of Greeks as a people, as Roderick Beaton’s The Greeks: A Global History amply illustrates.

His book is studded with examples of the worldwide reach of Greek culture over the past 3,000 years. Greek mercantile networks in the 18th century stretched from Marseille to the Sea of Azov in a pattern resembling that of the 7th century BC. In the mid-17th century Greeks opened the first coffee shops in London (Greek Street in Soho testifies to their enduring presence in the capital’s life).

Constantine Cavafy, one of the greatest modern Greek poets, was born in the Egyptian city of Alexandria — founded by Alexander the Great in or around 331BC — and rarely visited Greece. After the British novelist EM Forster met Cavafy in Alexandria in 1917, he wrote: “He was a loyal Greek, but Greece for him was not territorial . . . Racial purity bored him, so did political idealism. And he could be caustic about the tight-lipped little peninsula overseas.”

Beaton, emeritus professor of modern Greek and Byzantine history, language and literature at King’s College London, is an authoritative guide to the countless ways in which Greek words and ideas have shaped the modern world. Alphabet, athletics, democracy, drama, history, pandemic, physics, politics, rhetoric — these are all words originating in ancient Greek. Much Greek influence was filtered through the Roman empire. The poet Horace, writing in the first century BC, observed: “Captive Greece took captive her fierce conqueror, and introduced her arts into rude Latium.”

Once great centres of Greek civilisation such as Alexandria, Constantinople and the southern Black Sea coast lie outside the borders of the modern Greek state

One prominent theme of Beaton’s erudite and highly readable book is the way that once great centres of Greek civilisation such as Alexandria, Constantinople and the southern Black Sea coast lie outside the borders of the modern Greek state. After the fall of the Roman empire in the west in the fifth century, Constantinople emerged as the capital of a Greek-speaking eastern empire that became known as Byzantium. Yet after western crusaders sacked the city in 1204, Byzantine power never recovered.

Most Greek-speakers, from the Mediterranean and Aegean seas to Cyprus and Anatolia, lived for the next seven centuries under the rule of foreigners — Aragonese, Catalans, Florentines, French, Genoese, Venetians and, especially after the fall of Constantinople in 1453, Ottomans. Athens, a shadow of its ancient self, was governed in the 13th century by a baronial family from Burgundy.

Ordinary Greeks were never more than second-class citizens in the Ottoman Empire, but matters could have been worse, as Beaton suggests when reminding us of Spain’s expulsions of Jews and Muslims from 1492 onwards. By the 18th century, the Ottomans relied on Greek-speaking aristocrats known as Phanariots to rule the provinces of Moldavia and Wallachia, now part of Romania.

Beaton’s book focuses, however, mostly on the ancient and medieval eras. It is three-quarters complete before he narrates the Ottoman conquest of Constantinople. Readers who want fuller treatment of Greece’s turbulent experiences since 1821 can turn to his 2019 book Greece: Biography of a Modern Nation, a history of rare quality.

Mazower, a professor at Columbia University, sets himself the task not just of retelling the familiar story of the Greek fight for independence but of placing the event in the broader context of modern European history. His book unfolds as an engaging combination of fast-flowing narrative and insightful analysis. Next to the abolition of slavery, the cause of Greek freedom “was to reveal for the first time in modern history the transformative international power of public opinion expressed in print and fuelled through associational life”, he writes.

Both sides committed atrocities in the war, and Mazower makes the perceptive point that some western European philhellenes who went to fight for the Greeks were shocked by episodes such as the slaughter in 1822 of Muslim civilians in Corinth. Yet it was the Ottoman massacre in 1821 of Greeks in Constantinople, and the public hanging of the city’s Greek Orthodox patriarch, that inflamed European opinion.

Klemens von Metternich, Austria’s ultra-conservative chancellor, wrote that “beyond our eastern frontiers, three or four hundred thousand hanged, strangled or impaled do not count for much”. He could not have been wider of the mark. Philhellenism and public outrage at repeated Ottoman atrocities created a liberal European conscience, an impulse to interventionism that resurfaced during the Spanish civil war of the 1930s and the Yugoslav wars of the 1990s.

As Greek civilians fled Ottoman forces in Asia Minor, the Peloponnese and vulnerable islands, the crisis “transformed international affairs by bringing a new subject to the attention of the world: the suffering non-combatant”, Mazower writes. On the US east coast, donations in support of Greek refugees poured in from towns, schools, colleges, churches and even the West Point military academy.

Against the odds, Greece became the first new nation state to emerge from the multinational empires that dominated Europe’s political map in the early 19th century

However, these efforts fell far short of what was needed to turn the war’s tide in favour of the Greeks. Internal divisions on the Greek side were so sharp that in 1824 a civil war broke out within the war against the Ottomans, a clash that prefigured similar splits in Greece during the first world war and in the 1946-49 civil war. “The democratic spirit was genuine among the Greeks but it made military organisation impossible and led to an acute sense of rivalry that was one of the main factors in prolonging the fighting,” Mazower writes.

The outlook for the Greeks was so dire by February 1826 that Colonel Charles Fabvier, a French veteran of the Napoleonic wars who fought with the Greeks, wrote: “Greece exists only in name. As the campaigning season begins, there are no more provisions, no soldiers nor money.” Yet the next year the British, French and Russians agreed to push for a settlement that would establish Greek autonomy under Ottoman suzerainty. The three powers did not explicitly threaten war, but they dropped a strong hint that, if the Ottomans rejected their initiative, some form of military intervention would follow.

The result was Navarino, an Ottoman defeat so comprehensive that Greek independence became inevitable. Yet, as Mazower explains, the British government regarded Navarino as “the most controversial and unwanted of triumphs”. Under George Canning, foreign secretary from 1822 to 1827 and briefly prime minister until his death in 1827, British policy had moved in an increasingly pro-Greek direction, but his death put the government in the hands of politicians who were anti-Russian and pro-Turkish. In his King’s Speech of 1828, George IV went so far as to call Navarino “the untoward event”. Still, the die was cast.

Greeks were barely involved in the three-power talks in London in 1830 that produced an accord to set up their country as a fully independent monarchy. Against the odds, Greece became the first new nation state to emerge from the multinational empires that dominated Europe’s political map in the early 19th century. Earlier this year, in somewhat subdued fashion because of the pandemic, Greeks celebrated the 200th anniversary of the outbreak of their war of liberation. There is no better time to remind ourselves, as Mazower says, that the achievement of independence was for Greeks “the greatest miracle of all”.

The Greek Revolution: 1821 and the Making of Modern Europe by Mark Mazower, Allen Lane £30, 608 pages