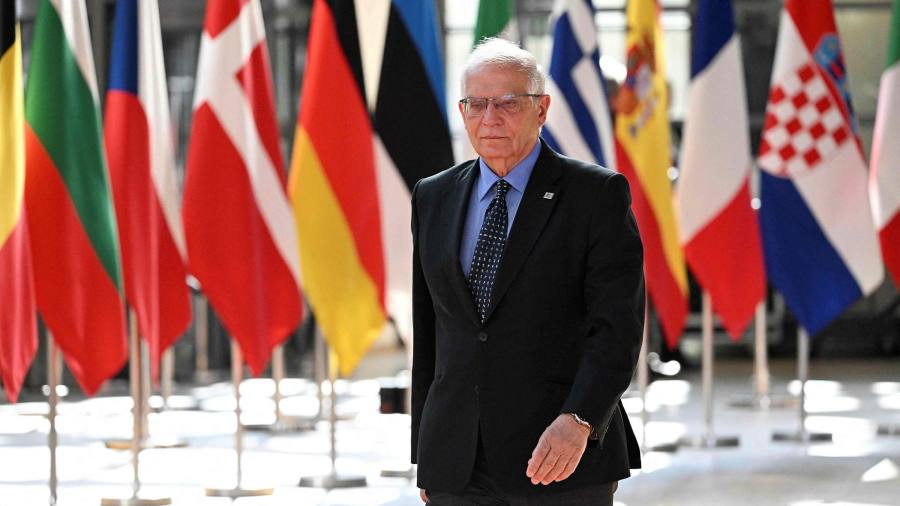 Good morning and welcome back to the Financial Times’ Europe Express Weekend newsletter. Here’s a question: is Russia’s war against Ukraine spurring the EU to get its collective act together on defence and security?

The question goes back a long way. In 2015, Jean-Claude Juncker, then European Commission president and a passionate supporter of EU integration, commented scathingly: “If I look at the common European defence policy, a bunch of chickens would be a more unified combat unit.”

Further back in time, an initiative to create a western European army collapsed in 1954 when the French legislature rejected the move. Suspicions about West German rearmament were widespread in France. So was a feeling that France should not put its substantial defence resources under a European umbrella.

We must invest more in defence and make up for years of budget cuts and under-investment. The message is clear: we need to reduce fragmentation and invest more together, starting now.

How seriously should we take Borrell’s summons to action?

In one sense, very seriously. Take Germany. In a cross-party vote, lawmakers in the Bundestag have just approved a €100bn defence spending programme.

It needed a constitutional amendment to get round Germany’s “debt brake” rule on fiscal restraint. Believe me, when Germany tinkers with its constitution to do something, you should sit up and listen.

In an article for the European Council on Foreign Relations, senior policy fellow Nick Witney outlines other reasons for being hopeful. Beyond Germany, EU national defence budgets are going up. The European Commission is setting up financial incentives for governments to invest in defence.

“Many of the old reasons for sterile dispute among member states have fallen away,” says Witney. Europeanists and Atlanticists — those who want the EU to stand more on its own feet, and those who prefer the security guarantees of the US-led Nato alliance — now share more common ground.

To this list, I would add the approval by EU governments in March of a new security and defence concept known as the “Strategic Compass”. This envisages strengthening the EU’s capabilities in areas such as cyber defence, intelligence, space and maritime security, and enabling the rapid deployment of up to 5,000 troops to different types of crises.

Other signs of the changing times are Denmark’s vote in a referendum to end its opt-out from EU defence policy, and the historic decisions of once-neutral Finland and Sweden to apply for Nato membership.

And yet, and yet. I remain to be convinced that a truly common, autonomous European defence framework is within reach.

To some extent the obstacles are technical. “Europe’s defence industry is woefully fragmented due to prevailing national interests,” Adája Stoetman, a specialist at the Clingendael Institute of the Netherlands, observes in a comment for Carnegie Europe.

But the underlying problems are political. They go to the heart of the question raised in 1954 by the French critics who killed off the proposed European army. How far are EU countries, especially the larger ones, willing to go in putting defence under supranational control?

And will the 27 ever be united enough to make it happen?

Nato operates under a principle of collective security that has worked for over 70 years. This is because the US leads the alliance with its overwhelming military might and commitment to Europe’s defence. Next to that, the EU has thin, poorly organised resources and no meaningful track record on defence.

Brexit hasn’t helped — the British were a big voice on defence and security in the EU, but now they operate through Nato and in contact with individual European countries, not through the EU.

The Russian aggression in Ukraine is exposing differences among the EU27. Some countries, such as Cyprus and Hungary, drag their heels on standing up to Vladimir Putin. Two parties in Italy’s government, the League and the Five Star Movement, are at odds with prime minister Mario Draghi over his strong support for Ukraine.

Above all, most central and eastern European governments are suspicious of what they see as French and German softness on Putin when the Ukrainians are fighting for national survival.

In a particularly good article for the Centre for European Policy Studies, Daniel Gros and Zachary Paikin argue that EU policy towards Russia is being put to the test because the war has enabled the central and eastern Europeans to emerge from the shadow of Paris and Berlin in matters of defence and security.

“Until such issues are addressed, the place of the EU itself in Europe’s political and security order will remain unresolved,” they write.

Our expenses are in dollars, our incomes in rials!

Iranian pensioners protested on Monday in the city of Tabriz against soaring living costs.

Tony’s picks of the week