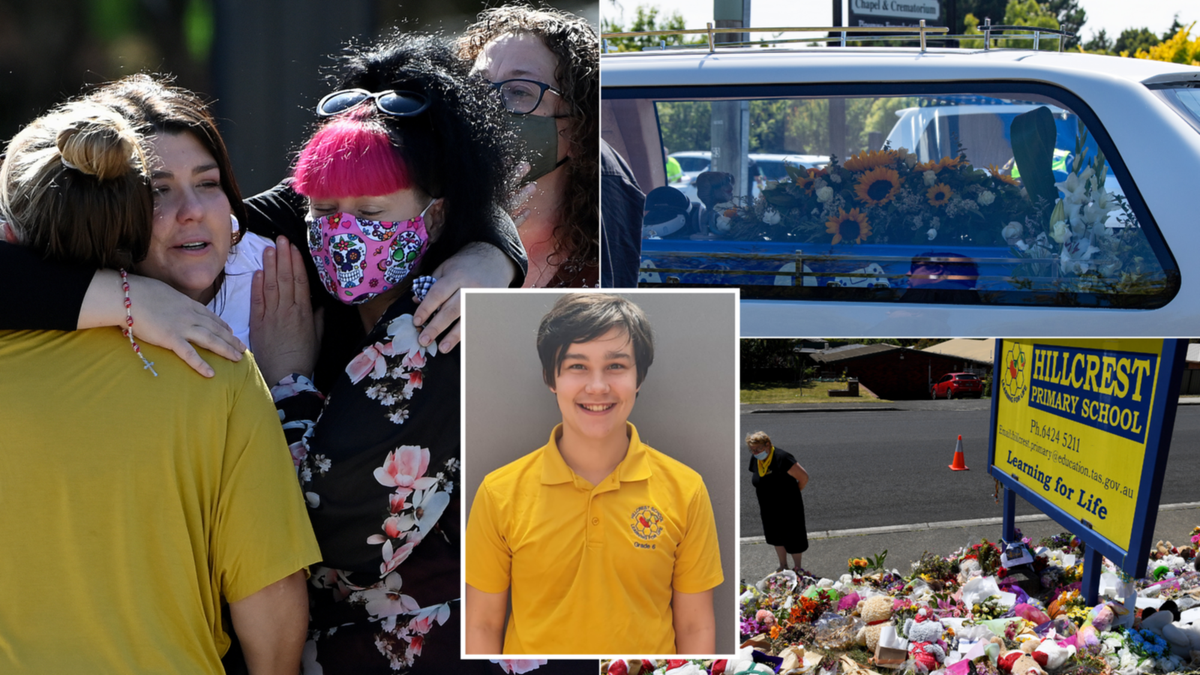 Zane Mellor, one of the six victims of a jumping castle accident in northwest Tasmania, has been remembered as kind and strong and a passionate gamer.

Family and loved ones gathered on Thursday morning in Devonport to farewell the 12-year-old, one week after the Hillcrest Primary School tragedy.

Watch the video above for the latest update on the tragedy

“I was so young when I had you, only 15, and now I know why,” Zane’s mother Georgie told the service.

“You grew up with me, held my hands and kissed my face in all the hard times.

“You were my man of the house always, my protector, my strength, my gamer.

“I love you Zane. No matter what the weather, we’re together.”

Zane gamed with friends from across the world under the nickname ‘Jurassic Zane’ in reference to his love of dinosaurs.

A letter from Zane’s grandfather was read out, recalling a fishing trip off the northwest town of Stanley where they were surrounded by dolphins.

His aunt described him as “kind and strong”.

“He lived life to the fullest and wasn’t afraid to show the world who he really was,” she said.

“I watched you take your first step … you were my gaming buddy. You will never be far from our minds.”

Messages from Zane’s classmates and teachers were also shared.

“I loved your personality, every day you would put a smile on my face,” one school friend wrote.

Streams of people have continued to leave flowers, soft toys and tributes outside the primary school.

The condition of two boys injured in the accident has steadily improved from critical to stable, Premier Peter Gutwein said at a press conference in Hobart.

“I understand they have been moved out of the ICU,” he said.

One other student injured in the accident is recovering at home.

An online fundraising page set up by Devonport local Zoe Smith has raised more than $1.4 million for the families.

Police, including specialist officers from NSW, have started interviewing the many young witnesses to the accident, which will be examined by the coroner.

Around 40 children were enjoying end-of-year celebrations when a freak gust of wind picked up the jumping castle and several inflatable zorb balls.

“Thank you to you all for the invaluable and caring work you have done and continue to do with everyone affected by this tragedy,” she said.

Earlier this week, the Glenorchy City Council in southern Tasmania banned jumping castles and inflatable devices from being used on council-owned property.

Tasmania’s education department has put a stop to inflatable equipment being used on school sites.

Prime Minister Scott Morrison, who visited the school with wife Jenny on Saturday, has announced $800,000 will be made available to fund trauma counselling for people impacted.