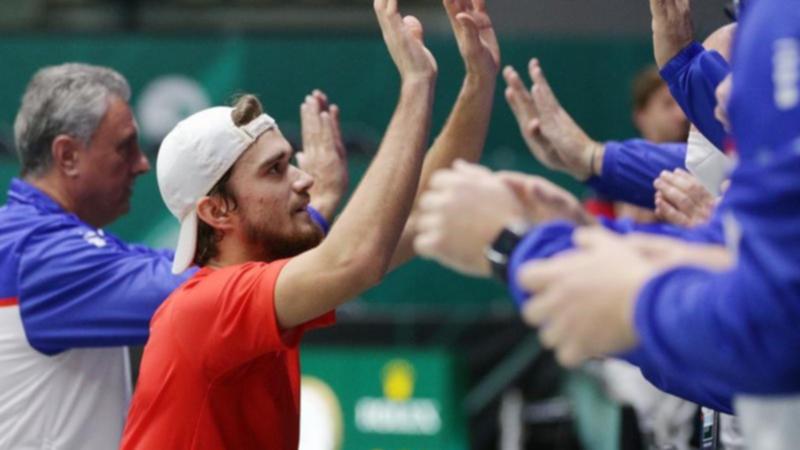 Brothers Elias and Mikael Ymer comfortably won their singles rubbers against Canada to get seven-times champions Sweden off to a winning start in the Davis Cup finals in Madrid.

The tournament began on Thursday with 18 finalists set to compete in six groups of three across three cities – Madrid, Turin and Innsbruck. Eight teams qualify for the knockout rounds with the final taking place in Madrid on December 5.

Elias hit 22 winners as he eased past Steven Diez 6-4 6-2 in the first match before younger brother Mikael made it 2-0 with a solid 6-4 6-4 victory over Vasek Pospisil.

Mikael was impressive on serve, winning 80 per cent on points on his first serve and facing just one break point.

“When you play someone like Vasek who’s so good in his offence it doesn’t give me, especially with my toolbox, it doesn’t give me a lot of other options than to try to counter,” said the 23-year-old ranked 93 in the world.

“And I think the serve helped a lot today to not give him too many looks, especially in my service game.”

The Czech Republic’s Tomas Machac caused a huge upset in his Davis Cup debut when the 21-year-old, ranked 143 in the world, beat France veteran Richard Gasquet 7-6 (7-3) 6-2 to give his side a 1-0 lead in Innsbruck.

Gasquet fired more winners at an empty Olympiahalle arena, which has no fans due to Austria’s reintroduction of a COVID-19 lockdown, but the 35-year-old made several unforced errors and allowed Machac to win five games in a row at one point.

Adrian Mannarino brought France level at 1-1 with the Czechs after downing Jiri Vesely 6-7 (7-1) 6-4 6-2, with the tie now to be determined by a doubles encounter.

Meanwhile, Spanish player Carlos Alcaraz has tested positive for the coronavirus and will miss Spain’s upcoming Davis Cup finals campaign, which begins in Madrid on Friday against Group A opponents Ecuador.

Davis Cup officials tweeted on Thursday a player had gone into isolation and the 18-year-old Alcaraz revealed on Instagram he was the man in question and very sad to “miss such an important and special event.”

The other Spanish players are conducting a new round of PCR tests.

ATP Cup winners Russia are also in their group, with world No.2 Daniil Medvedev and world No.5 Andrey Rublev in the team.