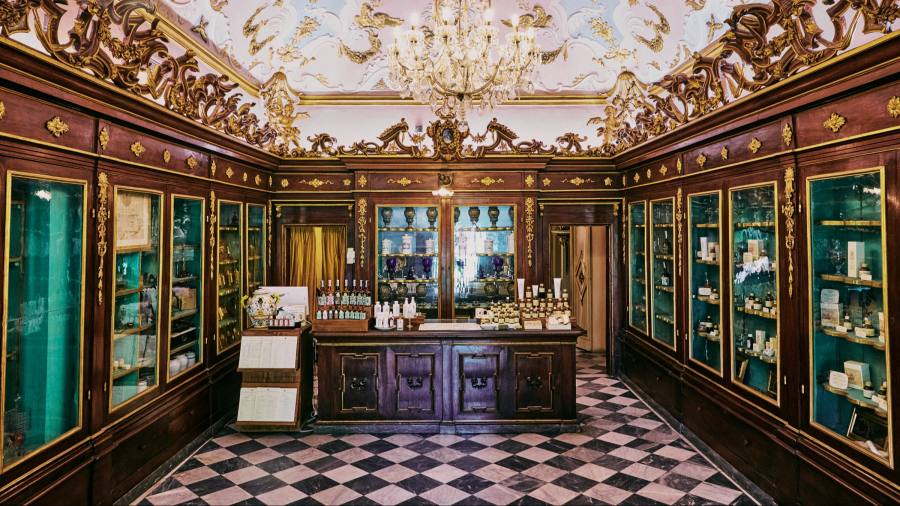 Established by Dominican friars in Florence in 1221 to serve the local community with herbal remedies and therapeutic treatments, the exquisite apothecary known as the Officina Profumo-Farmaceutica di Santa Maria Novella has survived the Black Death (its distilled rose water was used for cleansing), Savonarola’s Bonfire of the Vanities and the seizure of religious assets by the state in 1855. And it has a fabled reach – whisper the name of Santa Maria Novella today and you evoke a passionate response.

Everyone who is anyone has a favourite product. Parisians have been devotees since Catherine de’ Medici commissioned a scent that came to be known as Acqua della Regina (and is still sold today, from €75) on her marriage to Henry II of France in the 16th century; a New York architect swears by Tabacco Toscano; and English novelist Kate Lord Brown (author of The Perfume Garden) scents her desk drawers with the addictively subtle and mysterious pot-pourri (€19). Jade Jagger loves Garofano; Penélope Cruz wears the brand’s musk; in real life as in character (as Vesper Lynd in Casino Royale), Eva Green keeps Melograno – the pharmacy’s deliciously refined pomegranate fragrance – in her handbag. With more than 600 products, from terracotta pomegranates steeped in Melograno (€45) to almond hand cream (€35) or tiny lacquered boxes of Carta d’Armenia paper (€15), there is something here for everyone.

Following the opening of the original shop in 1612, there are now more than 75 outlets around the world, from Barcelona to Seoul. But the great enterprise – and for many, the love affair – begins in Florence and the original pharmacy, which looks into the magnificent Great Cloister of the church of Santa Maria Novella. Even here, the brand is discreet, and the entrance on the unprepossessing Via della Scala does not proclaim itself: on his own first pilgrimage (“long before the iPhone and Google Maps”), the company’s CEO Gian Luca Perris found himself wandering up and down the street for some time before he found his way inside.

Once the threshold is crossed, however, the genius loci is in command. The marble-floored lobby leads into a succession of loftily beautiful and atmospheric spaces. Every room has its story, from the panelled cabinets and old glass of the pharmacy to the vaulted ceilings of the chapel of San Niccolò. The cool, frescoed sacristy is the place products would have been stored, and patients taken to rest; the secret window is where one of the Officina’s former directors is said to have spied on his employees.

Its reputation is built on quality, indomitable industry, Renaissance brilliance and sound business sense – the only time in its history that the pharmacy closed to the public was during the pandemic lockdown of 2020, although production was able to continue and the company used its supplies of sanitising alcohol to support Florence’s hospitals. Although some processes are still carried out by hand, around 30 years ago production was moved from the original terracotta-floored laboratory in Via della Scala to a streamlined factory on the edge of the city.

Even with new ownership and the appointment of Perris as CEO in 2020, there will be fine-tuning but no change for change’s sake. The firm remains entirely Italian-owned (investment firm Italmobiliare has an 80 per cent stake), and Roman-born Perris is adamant that this has been “a year of study” – of the company’s extraordinarily rich resources and of the formulas and “codes” it has registered for the products’ raw materials. There’s no rush to change things here.

“If we work on developing a fragrance,” says Perris, “we don’t launch it next year, we launch it when it’s ready.” Rosa Gardenia, a new fragrance created for the anniversary, draws on a similar scent in the archive. The new CEO learned his craft at the French house Houbigant (makers of scents so distinctive they reportedly gave Marie Antoinette away as she fled the sans-culottes in disguise) and is the founder of his namesake perfume brand. Perris is a “nose” to his core; his enthusiasm and expertise are palpable, whether he is explaining essential-oil extraction or identifying the wood used to make the pharmacy’s 18th-century fittings (walnut); he brings a welcome hint of Rome’s warmth to the outfit’s Florentine reserve.

But in the end, the scents of Santa Maria Novella belong to Florence, in all its subtle, complex, lovely austerity, from the thyme, bay and iris of the Florentine hills to the cool shadowy recesses of an ancient church.