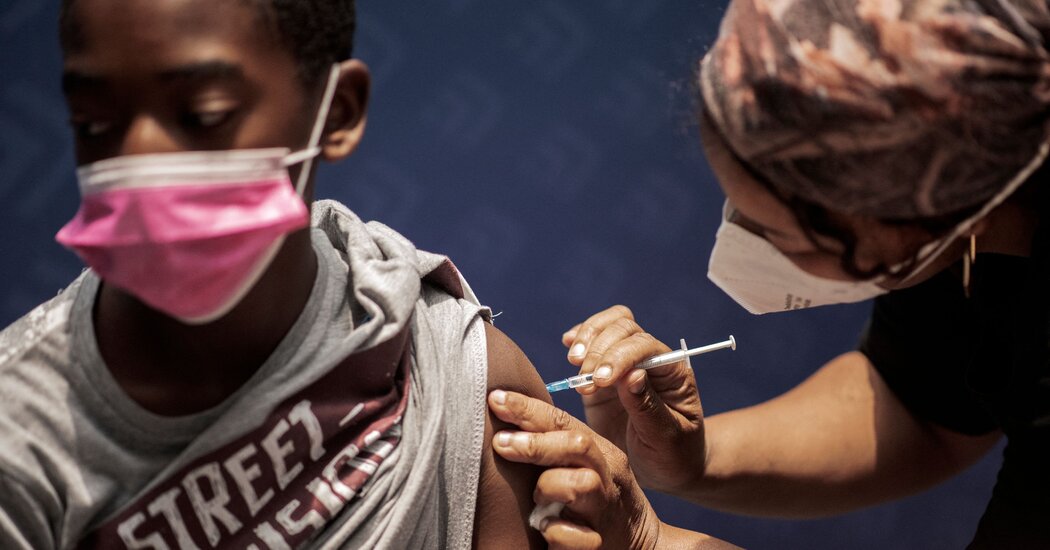 While the Omicron variant is driving up coronavirus infections to levels not previously seen in South Africa, early data suggests that hospital admissions are significantly lower than in previous waves.

But researchers warn that it is still too early to make definitive pronouncements about Omicron’s relative threat, because the outbreak’s epicenter is in one of the most heavily vaccinated parts of the country. Moreover, the majority of the population there has antibodies indicating recovery from a prior infection, which confers its own protection.

Since the emergence of the Omicron variant, South Africa has seen the fastest increase in new cases since the start of the pandemic. The number of cases per 100,000 already exceeds that seen in previous waves driven by the Delta and Beta variants. In the last 24 hours, the number of cases has increased by 10 percent, according to South Africa’s National Department of Health.

Hospitalizations have not kept pace, fortunately. In the second week of the wave driven by the Delta variant, from June 17 to June 24, an average of 4,485 new coronavirus infections were reported in the country, with a Covid hospitalization rate of 19 percent.

In the second week of the Omicron wave, between Dec. 9 and Dec. 15, the national data show that the average number of new infections in South Africa was nearly five times greater, at 20,207. Yet, less than 2 percent of these cases have resulted in hospital admissions. Not every case is sequenced, but Omicron is dominant now in the country.

Officials urged caution in interpreting that data. “The mildness of the disease may not necessarily mean that the virus itself is less virulent, but it’s probably also due to significant vaccine coverage,” Dr. Joe Phaahla, the minister of health, said during a televised briefing on Friday.

But densely populated Gauteng Province, the epicenter of the Omicron outbreak, is also the country’s economic hub, home to the country’s largest city, Johannesburg, and its administrative capital, Pretoria. The province has higher vaccination rates than others, and 70 percent of the population have antibodies, largely indicating prior coronavirus infections, according to Dr. Waasila Jassat, a researcher at the National Institute of Communicable Diseases.

In previous waves, the proportion of admissions with severe Covid has hovered at 60 percent, Dr. Jassat said, but during this wave, the proportion has dipped below 10 percent nationally. The number of patients needing oxygen is similarly lower.

Five weeks of data from the administrative capital Pretoria and the surrounding municipality show that hospitalizations are lower across all age groups. Among those aged 60 years and older, rates of severe illness appear to be 50 percent lower, compared with the Delta wave. This age group is also the most vaccinated across South Africa, in both rural and urban areas.

“For the first time, there are more nonsevere than severe patients in hospital,” said Dr. Jassat, who leads the hospital admissions surveillance at the institute.

“We have to interpret the less severity data in light of the high seroprevalence and some vaccination coverage,” Dr. Jassat said.

As this latest outbreak spreads to other parts of South Africa, that picture may change, she warned.

Hospital admissions are rising rapidly in KwaZulu-Natal, where the percentage of adults with at least one dose of a vaccine is the lowest in the country, at less than 38 percent. The province has seen its daily hospital admissions climb to 971 on Dec. 15 from 79 on Dec. 1. The number of intensive care unit admissions has also increased, rising to 22.

Most of these patients are unvaccinated, said Dr. Sandile Tshabalala, the head of the province’s health department, and 41 percent of critical care patients need ventilation.

Early data on the spread of Omicron in South Africa seems to echo research suggesting that vaccination will reduce the risk of severe disease. In the Western Cape, where two thirds of those over age 60 are vaccinated, the gap between new infections and admissions has increased between waves as vaccination rates increased, said the head of the province’s department of health, Dr. Keith Cloete.

And in Gauteng Province, the test positivity rate seems to be decreasing, dipping to 25 percent after hovering around 30 percent in the last week and raising hopes that the wave may be cresting. That rate, however, is increasing in all other provinces, as new cases climb nationally.