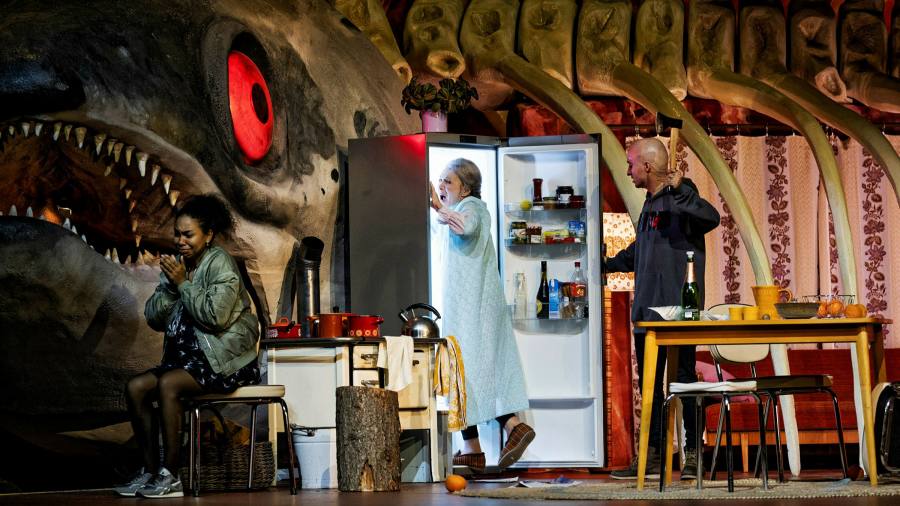 Asle has some problems. His underage girlfriend is heavily pregnant. They have nowhere to live, and no money. And he has an unfortunate habit of murdering everyone who annoys him.

The composer’s wife, Mari Mezei, has created a dense, wordy libretto that closely follows Fosse’s original. She leaves out the dream sequences, presumably assuming that Eötvös’s bent for the hallucinogenic will prove sufficiently removed from reality. It does not.

Sleepless tells the story of lost lovers in a hostile coastal village. Though parallels with Peter Grimes and Wozzeck are inevitable, Eötvös avoids direct musical quotations. Asle is hanged for his crimes, which sits oddly with Kornél Mundruczó’s modern production. Perhaps the powers-that-be thought that Mundruczó’s gritty realism would be a foil for what, in the end, is a ballad verging dangerously on kitsch.

Monika Pormale’s ingenious set consists of a gigantic salmon on a revolving stage — all shiny scales and glowing eye on the outside, raw flesh and bones creating various rooms on the inside. Drunk fisherman in dirty oilskins lurch around with bottles or crates of beer, threatening and judging their way through the story; an angelic chorus of offstage women provide an inner voice for the pregnant, passive Alida.

The women in this tale are all hags, whores or mothers; Alida is referred to as “little slut” with monotonous regularity. She has no agency — yet another opera that fails the Bechdel test. Is this really 2021?

Eötvös is undoubtedly the master of his craft. Sleepless is beguilingly beautiful, deftly orchestrated, full of consonant octaves and scales and spiced with judiciously placed dissonances, vividly pictorial throughout. The vocal writing is skilful and slick. Eötvös also conducts, and the outcome is both precise and sumptuous.

The score is helped along by a superlative cast. As the ill-fated young lovers, Linard Vrielink and Victoria Randem are exquisite — Vrielink all youthful lyricism with an undertone of seething violence, Randem with an ethereal beauty and meltingly lovely top notes. Katharina Kammerloher is a chameleon as both drunken mother and judgmental midwife; Hanna Schwarz makes a formidable Old Woman; Siyabonga Maqungo brings an edgy, creepy tone to his burnished tenor voice as Jeweler. The entire cast, including the offstage women, deliver vocal performances as close to perfection as anyone could wish.

The work loses steam after Asle’s death, not helped by the jarring presence of something presumably intended to be a luminous white cloud that looks disturbingly like a giant cauliflower. Even a cauliflower deity might balk at the saccharine ending, as the aged Alida admires a gold bracelet left to her by Asle while drowning herself in the fjord in a blaze of transcendence. Think Suor Angelica on the beach.

Sleepless is beautiful music for an irredeemable libretto, in a solid production which fails to find relevance.