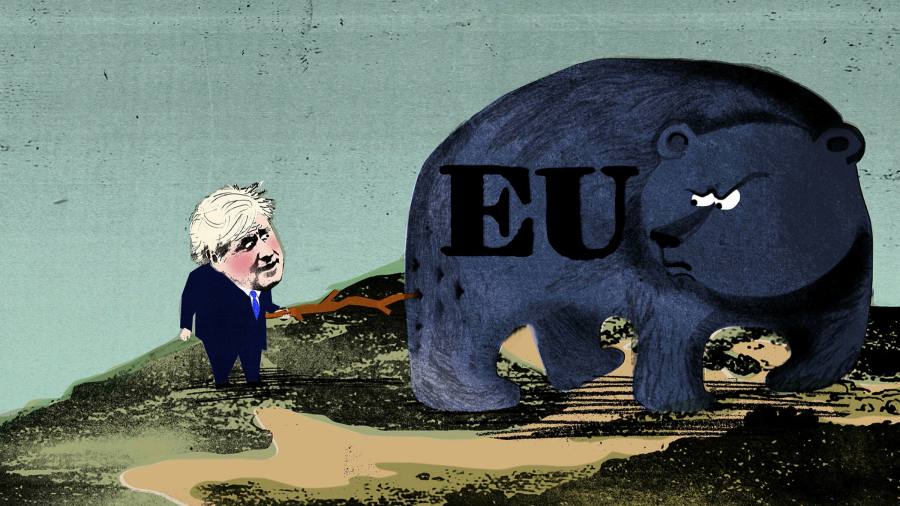 In another life Boris Johnson might have spent his days trying the handles of parked cars. The UK prime minister is a chancer, a man who believes in pushing his luck. He worries little about consequences because he trusts himself to get out of any scrape and conducts his politics with a smirk as if we are all in on the joke. It has been a winning formula.

Yet there are costs, as Tory MPs reading unflattering news reports about their outside earnings can now attest. They know they have the Owen Paterson standards debacle to thank for the unwelcome scrutiny. Johnson’s half-formed wheeze to dilute the independent scrutiny of MPs and get his colleague Paterson off the hook for blatant breaches of parliamentary rules created a painful Newtonian backlash.

Johnson’s rapid retreat also reminds his troops that for all the Churchillian rhetoric, he is often the first one heading for the hills when he deems the fight no longer worth his while. This is not always a weakness. Johnson feels no obligation to defend a losing position. But at least two Tory MPs are now facing calls for new standards inquiries because he did not game the consequences of his gambit.

This offers larger lessons both for his allies at home and his adversaries in the EU as he heads into a new fight with Brussels over the Northern Ireland protocol, which, to the rage of Unionists, created a trade barrier between Britain and the province.

No matter that he knew its import when he signed it, to Johnson this is unfinished business and he is determined to change it. He and his Brexit minister, Lord Frost, have thus far played a weak hand well. The protocol is unquestionably having adverse effects on trade between Northern Ireland and Britain and their uncompromising stance has secured concessions on goods checks, which they can argue would not otherwise have materialised. Another leader might have declared victory already, but the first lesson is that Johnson doesn’t throw in his hand while there are still cards in the deck.

There is much in the current row that suits his style. For most of the year, he brandished the threat to trigger Article 16 of the protocol, which allows a side to suspend part of the agreement if it is causing serious “social or economic damage”. What should be an escape valve for specific problems is seen by Johnson as a lever to try to rewrite the deal.

This moment is moving closer and has provoked bellicose retaliatory threats from the EU, though Frost has said the UK “is not there yet”. But if and when Johnson triggers the process, he can start small and ratchet up. The mechanisms allow for delays before each EU response, which means he can back away if the price, be it targeted retaliatory tariffs or more disruptive checks at Calais, seems too high. Even the nuclear option floated by Irish foreign minister Simon Coveney — of terminating the UK/EU trade deal — requires a year’s notice, giving Johnson time, though at the price of economic uncertainty.

The second lesson is that Johnson will retreat when outgunned. The history of his Brexit negotiations is of talking tough and then giving in. The fight over the protocol highlights just how thoroughly he caved in when he signed it in 2019. A year later he accepted a trade agreement that secured few advantages. For all his fighting talk of walking away with no deal, Johnson never did. Since his core demands go beyond what the EU is prepared to grant, it is a reasonable bet that the same will be true again.

So the third unhappy lesson for the UK is that the sooner the EU responds with disproportionate force, the faster he will back down. Some in the EU clearly see this, talking of the need to show “escalation dominance”. Johnson will not long jeopardise votes on the British mainland for a trade war over Northern Ireland. His allies may cheer a premier battling Brussels but they and the media could quickly turn in the face of economic damage and empty shelves.

This means his own cheerleaders need to give him the room to retreat when he is ready. And here is another warning from the Paterson saga. While blame lies with Johnson, a common factor in Brexit agitation and the Paterson episode are those Tory MPs, the “Spartans” who egg him on to hardline positions. Johnson fears and placates this rebellious old guard of former ministers and life-long backbenchers — the has-beens and never-weres — who destroyed Theresa May.

Driven by an insurgent mindset, they convinced themselves and Johnson that Paterson was the victim of an anti-Brexit, left-leaning standards commissioner and a rigged process — rather than his own foolishness. Since the greatest risk to Johnson’s premiership will come when his MPs no longer see him as a winner, there is a price to alienating voters to appease unreliable allies who often have poor political judgment.

Johnson takes a puckish pleasure in poking the EU bear. But it risks economic and political consequences which, as with the Paterson case, far outweigh the potential gain. The danger is more miscalculation. The EU, France especially, is losing patience with a man it sees as a bad faith actor. It too is capable of mistakes, pushing him into a corner with no line of retreat.

Johnson will keep trying the handles of the car until it is against his interests. There is, of course, a price to be paid in instability in Northern Ireland. But where he is indulged he will keep pushing. It is not a bad tactic for the weaker party, as long as he knows when to walk away.