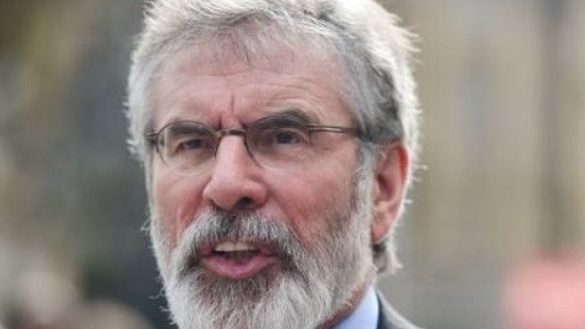 A senior Sinn Féin TD has said the party’s position is that Gerry Adams should not have to apologise for his role in a controversial Christmas video that has since been withdrawn following complaints from victims of the Provisional IRA.

Waterford TD David Cullinane previously said that Mr Adams had nothing to apologise for. Today he said the issue had “moved on” and the organisation that made the video had withdrawn it.

“I gave my view when I was asked yesterday. I stand by what I said yesterday,” he said. “The party position is Gerry Adams did not set out to cause any offence. He did what he did with a good heart and ultimately I think this video was withdrawn and that was the right thing.”

Asked if it is Sinn Féin’s position that Mr Adams should not have to apologise, Mr Cullinane said: “Yes.”

Party leader Mary Lou McDonald has been silent on the issue. Dublin Mid-West Sinn Féin TD Eoin Ó Broin said in a WLR radio interview that Mr Adams should apologise for the offence caused. Other TDs including Mr Cullinane, Matt Carthy and Pa Daly have disagreed with this.

Mr Cullinane was asked if Mr Ó Broin will face a sanction for his opinion on the matter. He replied: “I think you know the answer to that question which is no. Eoin Ó Broin is perfectly entitled to speak his mind and give his own opinion which he did.”

Mr Cullinane said Ms McDonald could speak for herself on the matter.

The video featured Mr Adams in a comedy sketch in which he sings: “Tis the season to be jolly, tiocfaidh ár lá, lá, lá, lá.” It also shows him visiting a house as a carol singer and the homeowner repeats a slogan used by Mr Adams in August 1995 in relation to the Provisional IRA: “They haven’t gone away, you know.”

The video sketch featuring Mr Adams had appeared as an online Christmas card.

Ferry Clever, the Derry-based company behind the video and Christmas card, later withdrew the video, saying its business is based around “satirical comedy” and that it was “never our intention to offend anyone”.

Mr Cullinane was speaking at the launch of a report on the cause of hospital waiting lists drawn up after his engagement with hospitals, patient groups and unions.