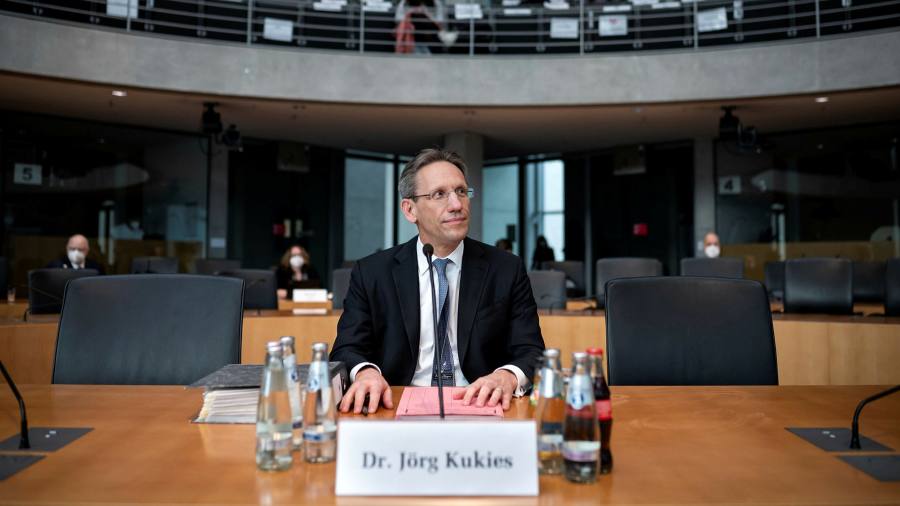 A flurry of diplomatic trips will take place today and tomorrow, with the new bundeskanzler, Olaf Scholz, sending his foreign minister Annalena Baerbock to Paris and Brussels today before he makes the same stops tomorrow.

In today’s profile, I look at the man Scholz has tasked with the job of two Merkel advisers. Jörg Kukies will be the chancellor’s top aide on all things Europe, as well as on international negotiations in G7 and G20 formats, and economic policy more broadly.

Meanwhile in Paris, President Emmanuel Macron today is set to present the priorities of the upcoming French presidency of the EU, while his prime minister will carry the same messages to the European parliament in Brussels.

And on the transatlantic front, US climate envoy John Kerry will be in Brussels today, meeting his counterpart Frans Timmermans after a stop in London and before a visit to Paris, in an attempt to accelerate climate action after COP26.

Speaking of climate action, one of the envisaged EU proposals — a carbon levy on some carbon-intensive imports — is facing steep opposition from the very steel industry it’s supposed to protect. We’ll look at the arguments and the calculations they have put together.

In his role as German finance ministry state secretary for financial markets and European policy, Jörg Kukies became well known in Brussels, especially after having been one of the architects of the Franco-German plan to issue common EU debt, which later became the bloc’s €800bn post-pandemic recovery plan.

In his new job, however, the former Goldman Sachs banker will have quite a bit on his plate: combining roles formerly held by two advisers in Angela Merkel’s chancellor office — top EU adviser and top economics adviser who doubles as chief negotiator for the G20 and G7 meetings.

“It’s a hell of a job,” says one EU diplomat who knows Kukies. “Combining economics and the EU in one person is huge.”

But the 53-year-old former investment banker with Social Democratic credentials does not shy away from a challenge — or several. (During the Wirecard scandal, Kukies successfully deflected any personal blame and initiated sweeping reform of BaFin, the German financial regulator.)

Scholz will probably expect him, in his chief economics adviser role, also to balance between the Green-led economy and climate ministry pushing for more investments, and the more frugal, debt-averse minister of finance, Christian Lindner.

On Europe’s reform of its fiscal rules, Kukies is also likely to strike a balanced note. In previous interviews with the Financial Times, he declared his full support for greater European fiscal integration — as long as member states play by the rules.

During his time at the German finance ministry, Kukies embodied a shift away from the austerity policies championed by Wolfgang Schäuble during and in the aftermath of Europe’s sovereign debt crisis. He is an avowed European (he studied in Paris) and told the FT that his job interview with Scholz in 2018 turned into a two-hour discussion about Europe.

“We talked about the inherent contradiction of having an almost completed monetary union and a fiscal union that is rather weak,” he said.

The FT has distilled the main challenges facing the new German government — and rampant inflation in a notoriously inflation-averse country is certainly one of them. How to strike the right balance between debt and funding necessary investments is another big one, as well as decarbonising the nation’s energy sources while meeting growing demand. (More here)

Swaths of Europe’s steel industry could shut under the EU’s green proposals, according to Eurofer, the industry lobby, writes Andy Bounds in Brussels.

The group has run the numbers on the Carbon Border Adjustment Mechanism, which should take effect from 2026.

The CBAM, once approved by member states and the European parliament, is intended to help domestic producers by forcing imported steel to pay its carbon cost. (This is part of a set of measures aimed at reaching the EU’s target of a 55 per cent reduction in carbon emissions by 2030, also known as Fit for 55.)

Steelmakers in the EU complain that while they must pay to burn fossil fuels, those outside the bloc do not.

However, the proposal would also reduce the number of free emissions licences handed out to the industry under the Emissions Trading System, increasing their costs. Currently about 75 per cent of emissions are free.

Based on a carbon price of €60 a tonne and annual production of 160m tonnes, the industry pays roughly €2.6bn a year. But carbon prices are rising fast and already above €80 a tonne. A Carbon Pulse poll of 10 market analysts expects the price to hit €97 by 2030.

The European Commission’s impact assessment for CBAM modelled a price of €50 a tonne by 2030.

The amount of free allocations for steel will drop 10 per cent annually between 2026 and 2030. Rather than 86m tonnes of free carbon, the industry would get 43m tonnes. Even if the industry cuts carbon output by a third by 2030 it would need to pay €8.4bn annually for the permits. That would wipe out its annual profits. Its members have roughly €160bn of annual turnover with profit margins about 3 per cent.

Output has dropped 26m tonnes over decade as plants have shut.

Axel Eggert, director-general of Eurofer, pointed out that in a globalised market such as steel “you cannot pass on the costs. You will lose market share.”

Foreign competitors would only pay for the carbon emissions of steel sent to the EU. Because that is a fraction of their production they could produce it in their most efficient facilities and not have to reduce emissions at all.

About 25 blast furnaces, which make steel directly from iron, are in the EU and UK. They will need to be converted to run on gas or hydrogen rather than coal, a process that will take several years given current technology and the slowness of national planning systems.

“Reducing free allocations removes the possibility for us to invest,” he said. And lenders would not want to fund unprofitable companies.

The commission contends — possibly optimistically — that countries such as Russia and South Korea are committed to carbon pricing, which will level the playing field.

“Free allowances were supposed to be a temporary measure to deal with the risk of carbon leakage,” said an official. There will be a “careful, predictable and proportionate transition”.

Rather than CBAM greening the EU industry, it would shrink it, Eggert said, reducing the bloc’s emissions but increasing carbon leakage as it imports dirtier steel from elsewhere.