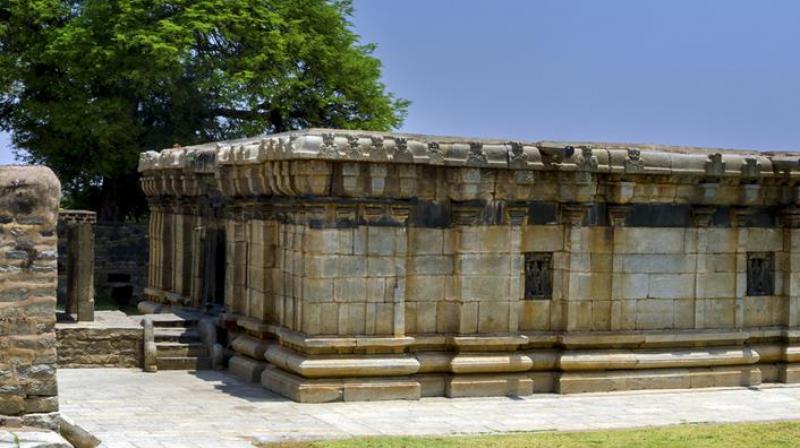 ANANTAPUR: The Eighth Century historic Hemavathi shrine with Lord Shiva as the deity in human form, originated in the Nolamba Pallava period, is continuing with its exclusive traditions during the Maha Sivarathri annual Brahmotsavam.

The temple located in Amarapuram mandal of this district has devotees across Karnataka.

The traditions of making offerings to the deity are interesting. No other Shiva temples across the country followed such traditions. The devotees of Lord Siddeswara Swamy highlight these traditions during Maha Sivarathri. The agni gundam created on the day after Shivaratri attracts huge crowds of devotees who would come and offer sambrani sticks into it, set in front of the temple.

Thousands of kilos of sambrani sticks are offered in the agni gundam. At least 200 shops selling sambrani packs sprang up in the streets of Hemavathi during the festival time.

Nagendra Prasad, devotee from Madhugiri in Karnataka, said his family would attend the event and offer sambrani sticks every year. The Endowment department made necessary arrangements. Farmers offer groundnut and other seeds kept ready for sowing along with sambrani into the gundam, in an effort to appease the deity to bless them for good crops and protection against pests and seasonal complications.

Also, the devotees believe their family members will be free of skin-related problems if they offered sambrani sticks at Hemavati. While the Sidimnanu culture is widespread in Srikakulam district, a similar tradition is evident at the Hemavati shrine during the annual festival.

Bale Basava, one of the Nandi statues consecrated during the 8th Century, gains attention as devotees offer bananas to Nandi instead of the lord. The bananas are put at the mouth of Nandi, seeking its blessings.

Narasaiah, a devotee and activist from Amarapuram, submitted a representation to the state government, urging it to develop the historic temple by adding it to the tourism circuit involving other temples.

Historian Mynaswamy pleaded that the historic Hemavathi temple be recognised by the Centre under the Monument Mira scheme, to enable it get more facilities. “The historic temple has been badly neglected for decades,” he lamented.