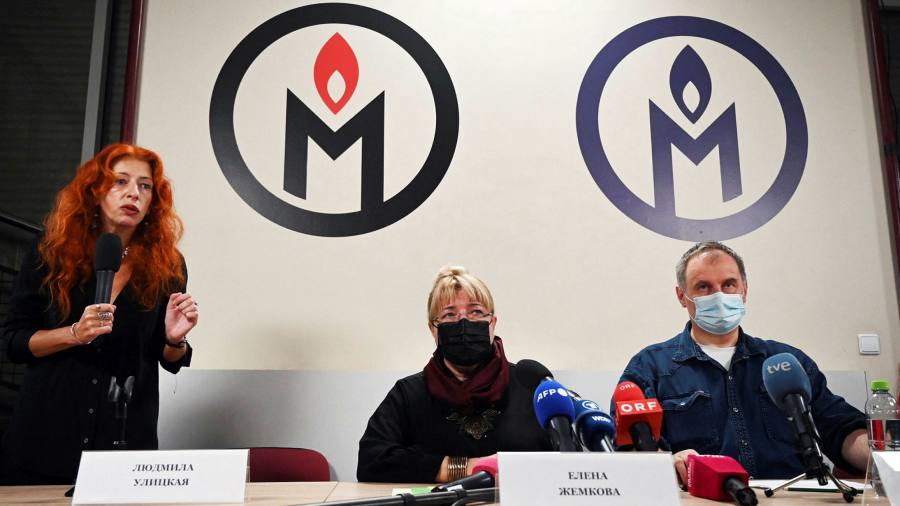 Little about the green-grey building on Varsonofyevsky lane in central Moscow suggests that it was home for 30 years to the main execution squad of the Soviet secret police.

About 15,000 people were shot and killed in its basement and backyard, tour guide Vasily Starostin told a small group gathered outside its gates one sub-zero day last week, on a walk organised by Russia’s oldest civil rights group, Memorial, and based on its mammoth archival research into Soviet-era crimes.

The group has worked since 1989 to preserve the memory of some of the darkest moments in Russia’s history, but its work could soon be halted after government prosecutors accused it of failing to properly identify itself as a “foreign agent” and alleged that its human rights centre supports extremist groups.

Moscow courts will convene to consider liquidating Memorial at two parallel trials on Tuesday and on Thursday after initial hearings late last month.

“If it happens, it will truly be a tragedy,” said Starostin, as participants in the “topography of terror” walk peered through the gates of the run-of-the-mill Moscow house that, according to Memorial’s research, was also once a laboratory for testing lethal poisons on political prisoners.

The move has triggered a public outcry, with some accusing the government of wanting to suppress the memory of Stalin-era crimes, from the Gulag labour camps to the purges and executions of the 1930s.

“Memorial is being taken from me right now,” author Ludmilla Petrushevskaya wrote in an open letter. “And so is the memory of the condemned and the executed, of those who . . . died of hunger and those who froze to death en route from one Gulag to another.”

Open letters have been signed by many others, including the widow of author Alexander Solzhenitsyn, whose novels exposed the horror of the Gulag system to the world. Over 120,000 people have supported a petition to save the group.

Government prosecutors argue that Memorial on several occasions broke a law requiring it to label all of its publications and online posts as having been produced by a “foreign agent”, a designation given the group in 2016.

On Tuesday — which also marks the anniversary of the death of one of Memorial’s founding members, Nobel Peace Prize winner Andrei Sakharov— Russia’s Supreme Court will reconvene to consider the case, which was first heard last month.

Describing the court cases against Memorial as a “criminalisation of memory”, Andrei Kolesnikov, a senior fellow at the Carnegie Moscow Center, said that the group had become an obstacle to the mythologised retelling of Russia’s past.

“History is very important to the people currently in power,” Kolesnikov said. “They don’t have many modern-day achievements to brag about, and visions of the future are pretty absent too . . . So the most important glue for holding everything together is history.”

“And this history has to be glossy, victorious, successful. Naturally, the history of Stalinism and the purges gets in the way,” Kolesnikov said.

Memorial, dubbed “Russia’s conscience” by some, has helped open monuments and museums, and has hung up hundreds of plaques in cities marking the last known addresses of Soviet political prisoners.

A plaque for Kolesnikov’s grandfather, who died in a prison labour camp in 1946, was installed on a Moscow building three years ago.

Memorial has also combed through archives to create searchable databases of the prison and death records of the Soviet era’s many millions of victims — but also of the names of over 41,000 perpetrators from the NKVD secret police.

Last week, the Supreme Court ruled against a historian seeking to declassify certain archived documents that would have revealed more NKVD names. Arguing in court, representatives of the FSB, the NKVD’s current iteration, said such a disclosure would jeopardise national security. The ruling was telling, said Kolesnikov, who discovered the names of his grandfather’s accusers and jailers in Memorial’s lists.

At a meeting of Russia’s human rights council last week, Russian president Vladimir Putin said he respected Memorial’s activities, but added that he also understood the group to have defended terrorist groups.

“Regarding the international organisations that Memorial is trying to defend, we have them on our list of terrorist and extremist organisations. This is an issue that requires additional research,” the Interfax news agency quoted Putin as saying.

Memorial’s human rights centre, well-known for its work in Chechnya and other southern Russian republics, has questioned some of the cases against groups ruled as terrorist or extremist in Russia, including Islamist group Hizb ut-Tahrir and the Jehovah’s Witnesses. On Thursday, a Moscow city court will convene to consider whether in doing so it has broken the law.

This branch of Memorial also maintains a modern-day list of political prisoners, and its numbers are now comparable to those seen in the late Soviet period, said Sergei Davidis, head of the group’s political prisoner support programme.

“It is the absolute highest number in the history of modern Russia,” Davidis said.

Ending the Memorial walk around central Moscow, after stops at former show trial courtrooms, execution sites, and prisons, tour guide Starostin said he believed that even if the group was shut down, the idea behind it would survive.

“You can ban us and liquidate us as an organisation, but you can’t ban the idea itself — that’s the most important thing,” he said.