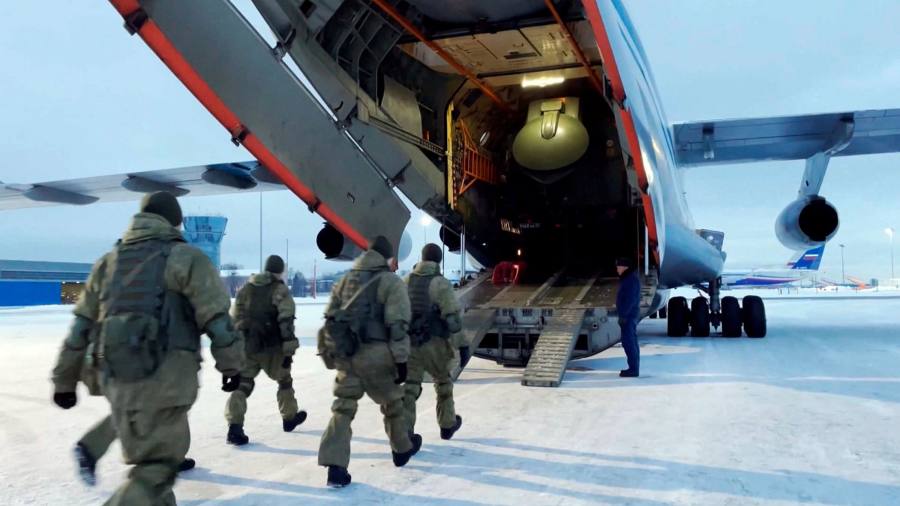 Russian paratroopers and units of allied regional armies started to arrive in Kazakhstan on Thursday after the country’s president appealed for help in putting down protests that have led to dozens being killed in clashes with police.

Limited units of Russian paratroopers, plus military contingents from Armenia, Belarus, Kyrgyzstan and Tajikistan, were sent as a peacekeeping force at the request of President Kassym-Jomart Tokayev to the Collective Security Treaty Organization, a Russia-led military alliance.

A video shared by Russia’s defence ministry on Thursday showed several soldiers boarding a military plane that then took off for Kazakhstan. The alliance’s troops will focus on “protecting important state and military facilities, and assisting Kazakh law enforcement in stabilising the situation”, a statement by the alliance said.

Key infrastructure at stake includes gas pipelines and other energy facilities in Kazakhstan, a major oil exporter, as well as the Russian space centre in Baikonur. Moscow also has several military sites in the country, including a key anti-ballistic missile testing range.

It is the first active joint action by the CSTO alliance, which has a collective security provision and conducts regular military exercises, since it was founded two decades ago.

Units of the Russian contingent already in the central Asian nation “have begun to carry out their assigned tasks”, the alliance statement added.

It was unclear how many troops would arrive in total. Armenia is dispatching 70 soldiers, while Tajikistan is sending 200, RIA news reported. They may remain in the country for about a month, Interfax news agency reported, quoting the deputy head of the Russian parliament’s defence committee.

The CSTO deployments are a test of Russia’s capacity “to help stabilise its formal allies without alienating their populations”, wrote Dmitri Trenin, director of the Carnegie Moscow Center. Despite myriad potential pitfalls, it would be “a big boon if Moscow succeeds”, he added.

Tatiana Stanovaya, founder of political consultancy R Politik, said the maximum participation from CSTO allies would reach no more than 3,500 troops. As for Russia, it has “decided to take part symbolically but [its forces] will be there primarily to protect infrastructure”, she said. “Russia does not want to get involved . . . It does not want to do the local government’s dirty work.”

The protests, which began this week, have taken place mainly in the country’s largest city, Almaty, and a string of smaller cities in western Kazakhstan. Triggered by anger over fuel price rises, they escalated rapidly into more widespread political protest, with cars and buildings set on fire, including the presidential residence and mayor’s office in Almaty.

After making several major concessions on Wednesday — including firing the government and apparently displacing longtime ruler Nursultan Nazarbayev from a key security role — Tokayev has announced a tough crackdown on the protests, imposed a nationwide state of emergency and called for help from abroad.

Internet access was partially restored on Thursday, after it was cut almost nationwide on Wednesday. But the government ordered banks to remain shut and extended school winter holidays to January 17.

It was unclear whether security forces had regained control of Almaty’s international airport, which was seized by demonstrators during the clashes.

Many airlines cancelled flights to Almaty and to Nur-Sultan, the Kazakh capital.

Some passengers due to depart on Wednesday were evacuated to a nearby village, said Evgeny, who was on holiday from the Russian city of Magadan. He was due to fly out from the airport but was unaware of the broader situation because internet access was blocked.

“Suddenly, everyone started to run,” he told the Financial Times, describing the situation in the airport. “We didn’t know what was going on, but then we were told that attackers had seized the airport.” Passengers were initially evacuated to a nearby cargo terminal.

The Kazakh government on Thursday also introduced price controls on petrol, diesel fuel and liquefied petroleum gas for 180 days, the government’s press service said, in another attempt to appease protesters.

Russia’s foreign ministry said Moscow “will continue to closely consult with Kazakhstan and other CSTO allies in order to analyse and, if necessary, develop further effective steps to assist Kazakhstan’s law enforcement agencies in conducting a counter-terrorism operation”.

The Kremlin intervention to help an ally facing upheaval is its second in as many years after Russian president Vladimir Putin backed Belarusian leader Alexander Lukashenko in his crackdown on popular protests in 2020.