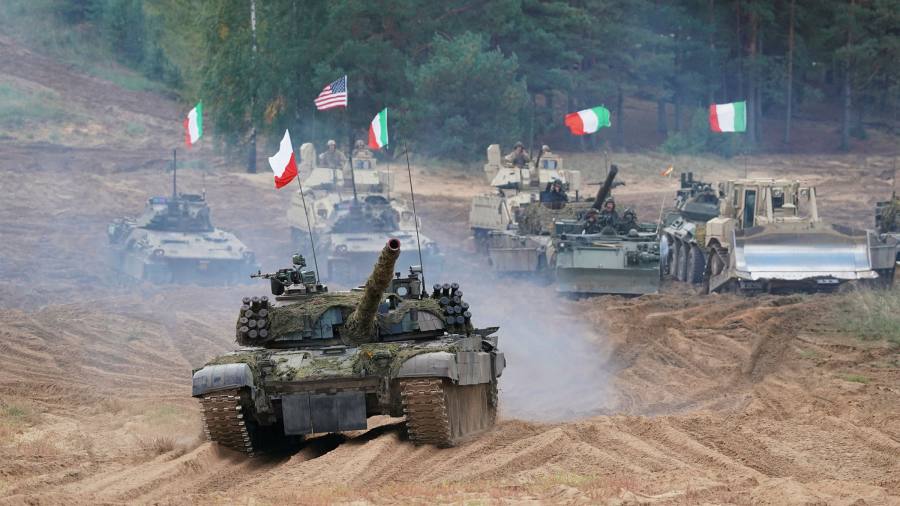 Russia has published a set of stringent demands it is making of the US and Nato, which would end all prospect of Ukraine or any more former Soviet states joining the transatlantic alliance and rewrite many of the principles upholding European security since the end of the cold war.

Moscow’s demands go even further than the “red lines” mentioned by President Vladimir Putin, who has said they are needed to insulate Russia from the threat of attack, and many have previously been ruled out by Nato and its members.

The US and EU are worried that the proposals could be a prelude to war after Russia deployed about 100,000 troops near its border with Ukraine in recent weeks.

Putin, who denies Moscow plans to invade its neighbour, has blamed the tensions on Nato, for supplying Kyiv with advanced weaponry and holding “provocative” exercises near Russia’s borders.

Sergei Ryabkov, a deputy Russian foreign minister, said Moscow wanted to begin negotiations over its proposals in Geneva as soon as possible.

“US and Nato have aggressively escalated the security situation in recent years, which is absolutely unacceptable and extremely dangerous,” Ryabkov said. “Washington and its Nato allies must immediately end their regular hostile acts against our country.”

Joe Biden, the US president, agreed to discuss Putin’s grievances further in a video call last week but has given no indication that Washington could accept the demands. Ryabkov called on the White House to take Moscow’s demands seriously.

A senior US administration official said Washington was concerned by Russia’s “increasingly harsh rhetoric” and “false narrative that Ukraine is somehow seeking to provoke a conflict with Russia”.

Under the draft proposals, Nato would have to seek consent from Moscow to deploy troops in former Communist countries in Europe that joined Nato in May 1997.

Nato would have to refrain from “any military activity” in Ukraine, eastern Europe, the southern Caucasus, and central Asia; pledge not to deploy any missiles close enough to hit Russia; and limit exercises to previously agreed numbers in border zones.

A separate treaty with the US would require each side to keep their bombers, naval vessels and missiles out of striking distance of the other party, as well as limiting all their nuclear weapons to their own territory.

The US would also pledge not to set up bases in any former Soviet countries or partner with their militaries.

The US official said Washington was prepared to discuss some elements of Moscow’s proposals. “That said, there are some things in those documents that the Russians know will be unacceptable,” the official added.

Jen Psaki, White House press secretary, speaking on Air Force One, said: “We will not compromise the key principles on which European security is built, including that all countries have the right to decide their own future and foreign policy free from outside interference.”

Jens Stoltenberg, Nato secretary-general, did not rule out discussions on Russia’s demands but said the alliance was “clear that any dialogue with Russia would also need to address Nato’s concerns about Russia’s actions, be based on the core principles and documents of European security and take place in consultation with Nato’s European partners such as Ukraine”.

Nato members want to avoid dismissing Russia’s proposals out of hand and giving Putin a propaganda victory, while at the same time making clear that many of the demands — including ruling out Ukraine’s potential membership of the alliance — are unacceptable.

Alliance officials are also aware that, without negotiations to defuse tension and reverse Russian troop deployments, Moscow may seek to establish its militarisation of the border as an accepted baseline.

Oleg Nikolenko, a spokesperson for Ukraine’s foreign ministry, said: ‘We emphasise that only Ukraine and Nato member states have the right to decide the direction of further development of our relations, including the matter of Ukraine gaining membership in the alliance.

“The same applies to the exclusive sovereign right of Ukraine to independently determine the course of its relations with foreign states at the bilateral level, which includes military co-operation.”