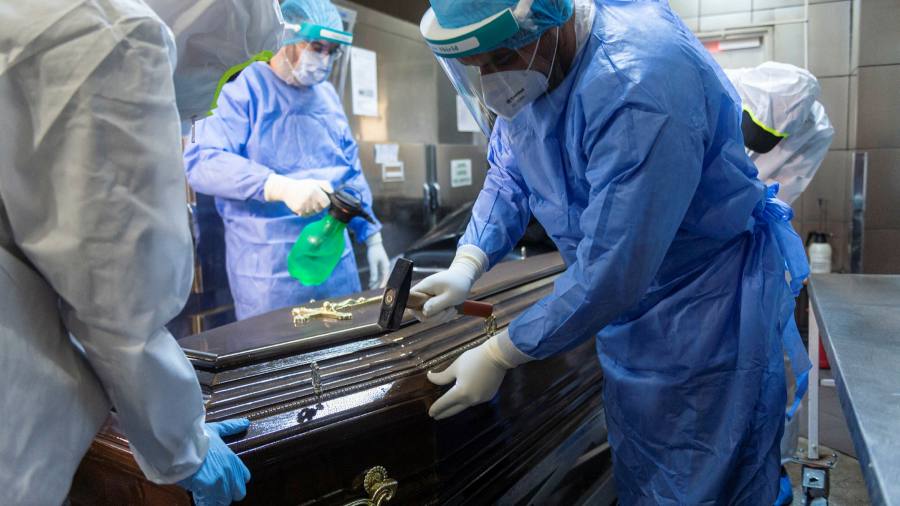 After an energy company collapsed in the Romanian city of Timisoara, leaving thousands of homes and some hospitals without heating or hot water as night-time temperatures neared freezing point, mayor Dominic Fritz had a stark warning for the country at large.

“A tough time ahead for everyone due to increasing the price of gas and electricity,” Fritz wrote on Facebook. “Timisoara was an alarm signal. This is why a national solution is needed.”

But national solutions to fragile energy supplies — or other problems such as one of Europe’s worst rates of Covid-19 — are elusive as Romania remains mired in a political fight.

Since October 5, when the centre-right government of prime minister Florin Citu fell after the sacking of a minister sparked a walkout by a junior coalition partner, Romania has been without firm leadership. President Klaus Iohannis has tried and failed to appoint a successor to Citu.

There is simmering public resentment at the political infighting taking place against a backdrop of a health crisis. At more than 400 deaths a day on average, Romania in late October was producing 40 per cent of all EU Covid fatalities.

Andrei Roth, an IT professional from Cluj, contrasts the situation with a fire six years ago that claimed 64 lives at a concert hall in Bucharest, unleashing big protests and toppling a previous government. “Are the gods of today really untouchable?” he asked.

At the heart of the political impasse is Iohannis, who analysts say wanted to cement control of government through manoeuvres within his own National Liberal party (PNL). He helped his protégé Citu to the premiership last year, then had Citu replace former premier Ludovic Orban at the helm of the party in September.

But the withdrawal of support for Citu as prime minister has left Iohannis struggling to find a successor who can command a majority.

“[The president] engineered it without a plan,” said Sorin Ionita, an analyst with the Bucharest-based Expert Forum. “There is not much systemic understanding of what is going on.”

The Covid strategy pursued by Citu and Iohannis is under attack as Romania has been ill-prepared for the latest surge in cases. Citu encouraged people to get vaccines but offered few incentives. With high levels of mistrust of vaccines, millions have failed to get jabs.

“After May the president and the premier started to talk about vaccinations in the past tense,” said Octavian Jurma, physician and health statistician. “It was declared a huge success, and they said the pandemic was over in Romania.”

The caretaker government has passed a decree that makes Covid health passes obligatory for participation in public events. That, and more coverage of the latest record surge, have pushed up vaccination rates. But it has not been able to mandate vaccines for healthcare workers because it lacks a parliamentary majority. Fewer than four in 10 people are fully vaccinated.

Vlad Voiculescu, the former health minister who was fired as health minister by Citu in April when he wanted to implement restrictions that would kick in when Covid infections reached certain thresholds, says the government’s response has been too “little and too late”.

Fears over energy are a further problem for the government. In Timisoara, the state-run company that supplies heating and hot water became insolvent after gas prices surged. Its supplier has suspended gas shipments while other gas companies refused to step in or said they were also facing shortages, said Fritz, the mayor.

Romanian energy prices are some of the EU’s highest and could surge further, said Capucine May, a researcher at Verisk Maplecroft in a recent analysis. “The political crisis — which will delay the capping of energy prices and the provision of support to the country’s health system — is likely to exacerbate pre-existing sources of unrest,” May said.

Romania also needs to devise programmes to unlock €29.2bn of coronavirus recovery funds from the EU, which approved its plan a week before Citu’s government fell.

Iohannis most recently proposed a former general, Nicolae Ciuca, as the PNL’s latest candidate to try to stitch together a parliamentary majority to become prime minister. But on Monday evening Ciuca, standing alongside Citu, said he would hand back that mandate, declining to test support in a confidence vote in parliament.

Ciuca had little chance of becoming premier either without former coalition allies returning to support him or without backing from the main opposition party, the Social Democrats (PSD). The PSD tabled 10 conditions for support including some €20bn in extra spending, including on pensions and the minimum wage, which other parties reject.

At a time when fears over energy linger and the pandemic is claiming more than 3,000 lives a week, critics say politicians must put their differences aside.

“It is tragicomic,” said Hunor Kelemen, chair of the ethnic Hungarian UDMR party. “Everyone distrusts everyone. They compete and will not compromise for one second in the interests of the country.”