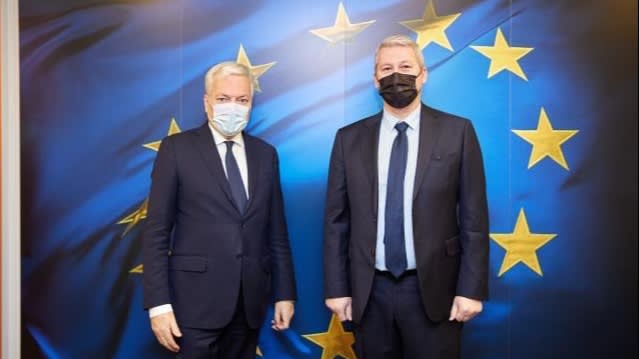 While Poland may be stealing the limelight with its rule of law disputes with Brussels, another eastern European country, Romania, has also started challenging the supremacy of EU law. In an interview with Europe Express, justice commissioner Didier Reynders lays out the issues and what consequences Bucharest can expect.

Meanwhile, in Vienna, the last session of talks with Russia concluded on a rather gloomy note yesterday, with Moscow characterising the whole endeavour as a “dead end”. Here is the FT’s take on the week of diplomacy that managed to avert an immediate conflict, but left some fearing the worst is yet to come.

And in energy crisis news, the Netherlands is reluctantly pumping emergency gas supplies for the EU, including top customer Germany, despite the government’s plans to retire Europe’s biggest gasfield in the coming years.

Romania’s constitutional court is following in the footsteps of its counterpart in Poland when it comes to challenging the supremacy of EU law, according to justice commissioner Didier Reynders, write Valentina Pop and Sam Fleming in Brussels.

Last year, first in a May ruling, followed by a second one in December, the European Court of Justice said that judges in Romania should put EU law above national legislation, including rulings of the national constitutional court, when they are in breach of the EU treaty.

The Bucharest-based court’s decisions mirrored what Poland’s and Germany’s constitutional courts have also said on the supremacy of EU law. But while Poland’s legal action was triggered by the country’s prime minister (who is not backing down over myriad legal disputes), the commission buried the hatchet with Germany after Berlin sent reassurances that it fully supports the supremacy of EU law.

Reynders said he may initiate legal action against Romania, given the country’s top court’s “real, permanent and persistent position to go against the EU law or the binding character of the ECJ decisions”.

While not as advanced in its resistance to ECJ rulings, Romania could follow Poland and be fined millions of euros if it refuses to implement the verdicts of the Luxembourg-based court.

One such demand is to abolish a special prosecutorial unit for judges, which “could be perceived as seeking to establish an instrument of pressure and intimidation with regard to judges”, according to the ECJ. Reynders said the Romanian justice minister promised that the special unit would be abolished as part of a broader reform, which has yet to be approved by the country’s parliament.

But Reynders said that was a stalling tactic he had encountered in discussions with Hungarian counterparts. “First, you need to implement [the ECJ rulings], in Romania, stop with the special section. Then, if you want to put into place a new system, we’ll verify.”

While some similarities can be found between Warsaw and Bucharest, one big difference remains: Romania has started receiving funds under the bloc’s NextGenerationEU €800bn recovery package. And unlike Poland, it is under the jurisdiction of a pan-European prosecutor’s office (coincidentally led by a Romanian prosecutor, Laura Kovesi), which can bring people to court for embezzling or defrauding EU money.

Are challenges to the supremacy of EU law justified? Tell us what you think and click here to take the poll.

What’s a little extra imported gas between historic friends and neighbours? The Netherlands and Germany are beginning to find out, as ties between the age-old allies have come under strain over Berlin’s requests for emergency Dutch gas supplies, writes Mehreen Khan in Brussels.

Stef Blok, the Netherlands’ outgoing economy minister, wrote last month to his German counterpart Robert Habeck warning that German requests for additional gas supplies from the Groningen gasfield were a cause of “serious worry”.

The Netherlands has committed to shutting down Groningen, Europe’s largest gasfield, over concerns of earthquakes and mini-tremors caused by decades of underground pumping.

But the field will have to keep producing well beyond forecasts this year, in part because of rising demand from Germany and Europe’s energy crisis. Germany alone will need about an additional 1.1bn cubic metres of gas from Groningen this year, according to reports.

Blok warned Berlin that Germany should aim to keep its appetite for gas to a “minimum” as Groningen is gradually taken off the grid. The Netherlands is weaning itself off gas as part of its green transition and opting for an energy strategy that is the polar opposite of Berlin’s, choosing to bet big on nuclear power.

Dutch prime minister Mark Rutte raised the sticky issue of German gas demand during his first visit to see new chancellor Olaf Scholz in Berlin. “We want to get rid of gas production,” Rutte said at a joint press conference.

But the Dutchman opted for a more diplomatic tone than Blok, adding that the Netherlands was aware of “German wishes” for more imports.

As with many EU countries, the Dutch are queasy about Germany’s growing reliance on Russian gas, including the Nord Stream 2 pipeline, to fulfil its energy needs over the next decades. But a natural corollary of less Russian gas in Europe is higher demand from other sources — led by Groningen.

Beyond Meat has become one of the most shorted companies in the US as investors fret over weaker sales and scepticism grows over the plant-based meat boom. Short-positions on Beyond Meat shares have increased 40 per cent since late October, when the California-based company issued a revenue warning. (More here)