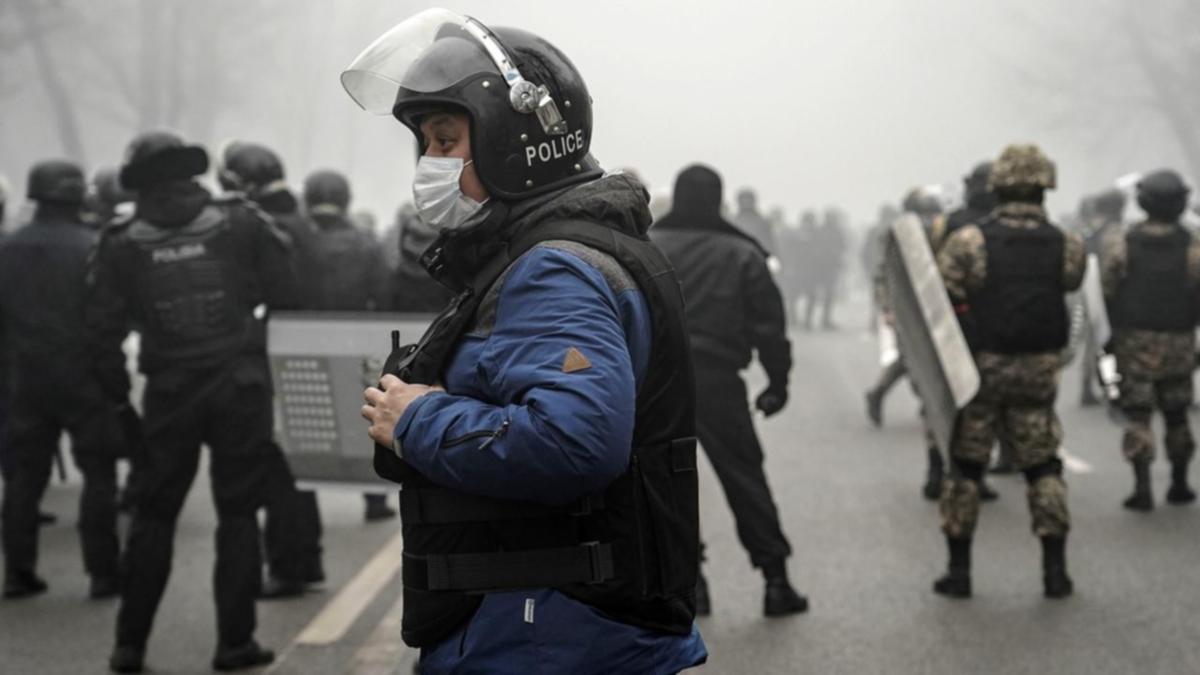 Fresh violence has erupted in Kazakhstan’s main city after Russia rushed in paratroopers to put down a countrywide uprising in the Central Asian former Soviet republic.

Police in the main city Almaty said they had killed dozens of rioters overnight.

The authorities said at least 18 members of the security forces had died, including two found decapitated.

More than 2000 people had been arrested.

After a night of running confrontations between protesters and troops on the streets, a presidential residence in the city and its mayor’s office were both ablaze and burnt out cars littered the city, Reuters journalists said.

On Thursday evening, renewed battles occurred in Almaty’s main square, which was occupied alternately by troops and hundreds of protesters throughout much of the day.

Reuters reporters heard explosions and gunfire as military vehicles and scores of soldiers advanced, although the shooting stopped again after nightfall.

TASS news agency quoted witnesses as saying people had been killed and wounded in the new gunfire.

Oil production at Kazakhstan’s top field Tengiz was reduced on Thursday, its operator Chevron said, as some contractors disrupted train lines in support of the protests.

The internet was shut down across the country, making it impossible to gauge the extent of the unrest.

But the violence was unprecedented in a state ruled firmly since Soviet times by leader Nursultan Nazarbayev, 81, who held on to the reins despite stepping down three years ago as president.

He blamed the unrest on foreign-trained terrorists who he said had seized buildings and weapons.

“It is an undermining of the integrity of the state and most importantly it is an attack on our citizens who are asking me… to help them urgently,” he said.

Russia said it would consult with Kazakhstan and allies on steps to support the Kazakh “counter-terrorist operation” and repeated Tokayev’s assertion that the uprising was foreign-inspired.

Russia did not disclose how many troops it was sending or what role they were playing.

The uprising, which began as protests against a New Year’s Day fuel price hike, swelled on Wednesday, when protesters chanting slogans against Nazarbayev stormed and torched public buildings in Almaty and other cities.

Tokayev initially responded by dismissing his cabinet, reversing the fuel price rise and distancing himself from his predecessor, including by taking over a powerful security post Nazarbayev had retained.

But those moves failed to mollify crowds who accuse Nazarbayev’s family and allies of amassing vast wealth while the population of 19 million remained poor.

Nazarbayev stepped aside from the presidency in 2019 as the last Soviet-era Communist Party boss still ruling a former Soviet state.

But he and his family kept posts overseeing security forces and the political apparatus in Nur-Sultan, the purpose-built capital bearing his name.

He has not been seen or heard from since the unrest began.

Kazakhstan is the top global producer of uranium, which jumped in price by 8 per cent after the unrest.

The country is also the world’s second-largest miner of bitcoin.

Bitcoin’s “hashrate” – the computing power of machines in its network – dropped by more than 10 per cent on Wednesday after Kazakhstan’s internet was shut off, according to crypto mining firm BTC.com.