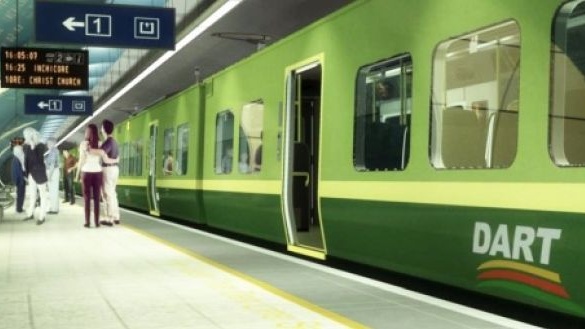 No metro lines will be developed to the south or west of Dublin, and the Dart underground line has been shelved for at least 20 years following a review of the National Transport Authority (NTA) strategy for the capital.

The cost of implementing the Greater Dublin Area Transport Strategy for the next 20 years has more than doubled from €10.3 billion to €25 billion.

However, planned major rail projects – including Luas lines to Finglas, Lucan, Poolbeg and Bray, as well as the Metrolink and Navan rail lines – are not expected to be delivered until after 2031, with the long-awaited Dart underground excluded from the 20-year programme.

Planning permission for the Metrolink line from Swords and Dublin Airport to the city is due to be sought next year, and options for a future extension of the line to the south or southwest of the city were considered under the year-long review of the strategy.

However, in its draft 2022-2042 strategy for Dublin published on Tuesday, the NTA has determined these areas should instead be served by the development of new Luas lines. However, these lines will not be developed until after 2042.

NTA deputy chief executive Hugh Creegan said a future line running from Sandyford through UCD/Stillorgan Road into the city centre would “take the load off the green line” meaning it would “not be required to be upgraded to metro standard”.

In relation to the prospects of taking the metro west through Terenure and Rathfarnham, he said a “thorough assessment” during the review period had found the “benefits of the project were less than the cost of the project”.

The strategy sets out proposals for improving bus provision, cycling and pedestrian infrastructure, as well as the road network, but its central focus is on the expansion of rail.

In addition to the four Luas lines due to be delivered post-2031, planning and design work will be done on eight more Luas routes – to Clongriffin, Balgriffin, Tyrellstown, Blanchardstown, Clondalkin, Tallaght/Kimmage, Tallaght/Knocklyon and the UCD/ Sandyford line. However, no construction is due to take place on these lines before 2042.

Hopes were this year revived for the Dart underground line, shelved a decade ago following the economic crash, when it emerged the NTA had engaged consultants to devise route options for the line.

However, the line linking Heuston Station to the Dart line by tunnelling under the city via St Stephen’s Green will also not be built before 2042, with the NTA committing instead to “preserve and protect an alignment to allow its future delivery subsequent to the strategy period”.

Also dropped from the strategy is the Eastern Bypass. The road, which in previous transport strategies involved an extension of the M50 under Sandymount Strand, has been consistently opposed by Dublin politicians.

It is “not proceeding”, the NTA said, but a “south port access route which will link from the national road network at the Dublin tunnel to serve the south port lands and adjoining areas is included”.

It is likely this will involve a bridge across the Liffey.

The transport strategy, which is updated every five years, has a stronger focus on walking and cycling measures than previously, with an aspiration to provide “traffic-free streets” in town centres where there are “benefits to transport and/or the local environment / economy”.

As well as increasing cycle infrastructure, the expansion and “interoperability” of bike-sharing schemes and the ability to bring bikes on public transport, which is currently very limited, is proposed.

There will be “no significant increase in capacity for private car trips” on radial roads within the metropolitan area, except where realignments or junction changes are necessary for safety reasons, it said, while road schemes will be designed to provide “safe and appropriate arrangement to facilitate walking, cycling and public transport provision”.

Speed limits will be reduced and variable limits introduced under the plan, along with car-free zones and a “reduction in public sector parking in city centres”, the report said.

The draft report is available for public consultation until December 17th.