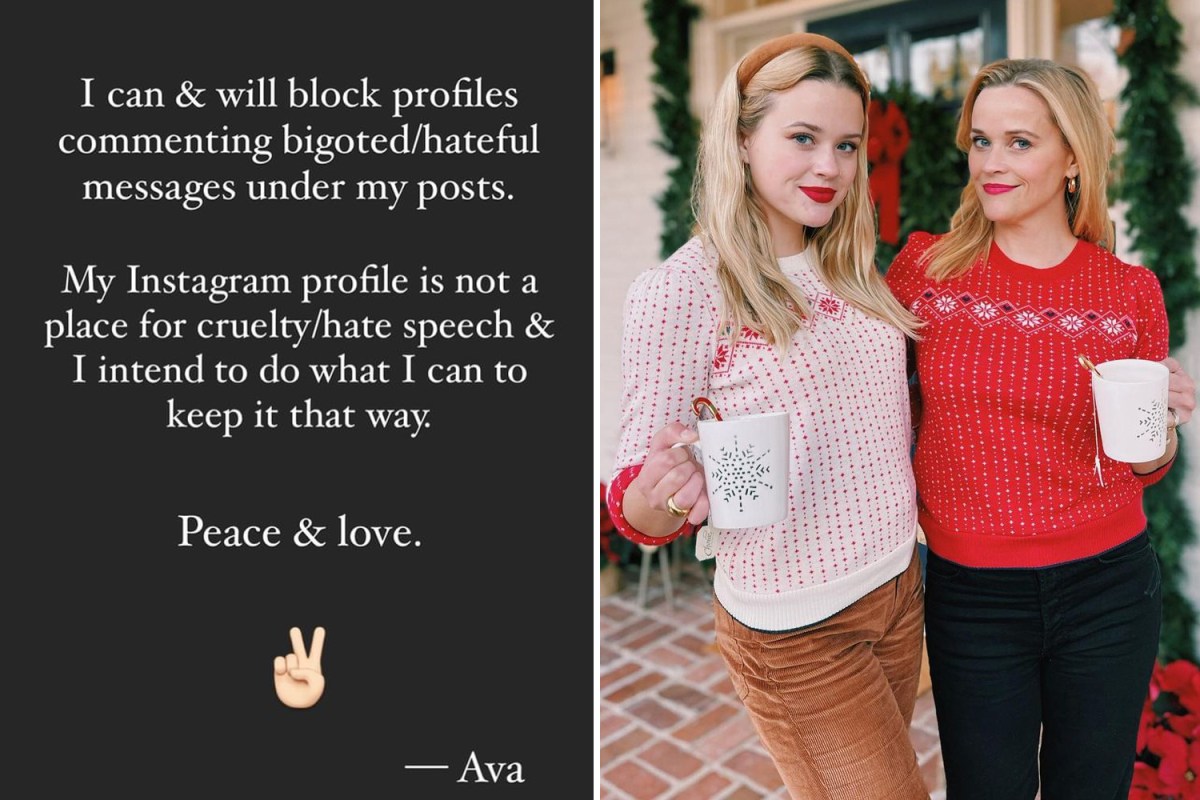 REESE Witherspoon’s daughter Ava Phillippe, 22, slammed the trolls who had “sent her hateful Instagram messages” after she had been discussing her sexuality.

The daughter of The Morning Show actress announced she would be protecting her online “profile” against “hate speech.”

Ava gave a “quick reminder” to her followers in an Instagram Story.

From now on, she has decided to “block profiles commenting bigoted messages under my posts.”

Ava’s account was not meant to be “a place for cruelty.”

She captioned her post: “I intend to do what I can to keep it that way.”

Ava signed off: “Peace and love” with the victory hand emoji.

This took place after Reese’s 22-year-old daughter held an Instagram Q&A session with her followers, according to E! News.

A follower had asked her if she was attracted to boys or girls.

She concluded: “Gender is whatever.”

In addition to Ava, Deacon, 18, is the son of the Big Little Lies star and actor Ryan Phillipe, 47.

Reese and her former partner were married back in 1999 before they divorced in 2008.

The I Know What You Did Last Summer actor also shares daughter Kai, 10, with Pitch Perfect actress Alexi Knapp, 32.

Ava has been in the limelight as a model and actress.

She has often shown up at red carpet events alongside her famous mother.

Ava had previously kept a relatively low profile on social media with a few posts now and then.

Back in December 2020, the 45-year-old movie star took an adorable snapshot with her daughter during the holidays.

The two picked out matching festive sweaters for their festive snap.

They were posing in identical outfits from the fashion line Draper James.

Reese and Ava were wearing bright lipstick while holding Christmas mugs, which had candy canes inside.

The Cruel Intentions actress wrote: “Ok. It’s 100 percent true that I had to beg her to wear a matching Holiday sweater….but isn’t it cute??!! #humorme #itsamomthing”

Jennifer wrote: “Worth it.”

Back in August 2021, the Walk the Line actress sold her production company, Hello Sunshine, which was set up back in 2016.

After her firm was bought by Blackstone Group, Reese released a statement and said: “I started this company to change the way all women are seen in media.

She continued: “We have watched our mission thrive through books, TV, film, and social platforms.

“Today, we’re taking a huge step forward by partnering with Blackstone, which will enable us to tell even more entertaining, impactful, and illuminating stories about women’s lives.”