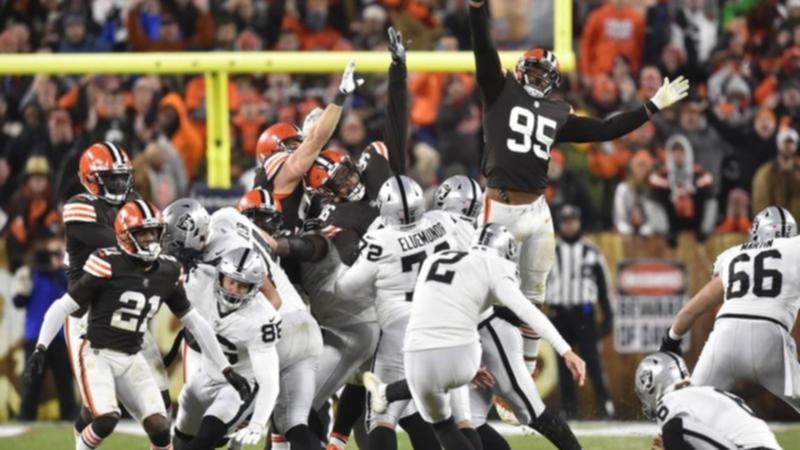 Daniel Carlson connected on a 48-yard field goal as time expired, lifting the visiting Las Vegas Raiders to a 16-14 NFL win over the short-handed Cleveland Browns.

It was the third field goal of the game for Carlson, who hit from 40 14 seconds into the fourth quarter for a 13-7 edge.

But the Browns (7-7) took their first lead of the game when Nick Mullens threw a 6-yard touchdown pass to Harrison Bryant with 3 minutes 45 seconds left.

Cleveland had a chance to wrap up the game after Greedy Williams intercepted Derek Carr with 2:47 remaining, but couldn’t gain a first down and had to punt.

Carr led a 41-yard drive in the final 1:50, finding Zay Jones for a 15-yard gain to put Carlson in range for his 31st field goal in 34 attempts this year.

Carr finished 25 of 38 for 236 yards with a touchdown and an interception for Las Vegas (7-7), who stayed in contention for an AFC wildcard spot.

Mullens, starting because Baker Mayfield and Case Keenum were two of 18 Browns inactive due to COVID-19, hit on 20 of 30 passes for 147 yards with a score.

Cleveland (7-7) missed on a chance to take first place in the AFC North.