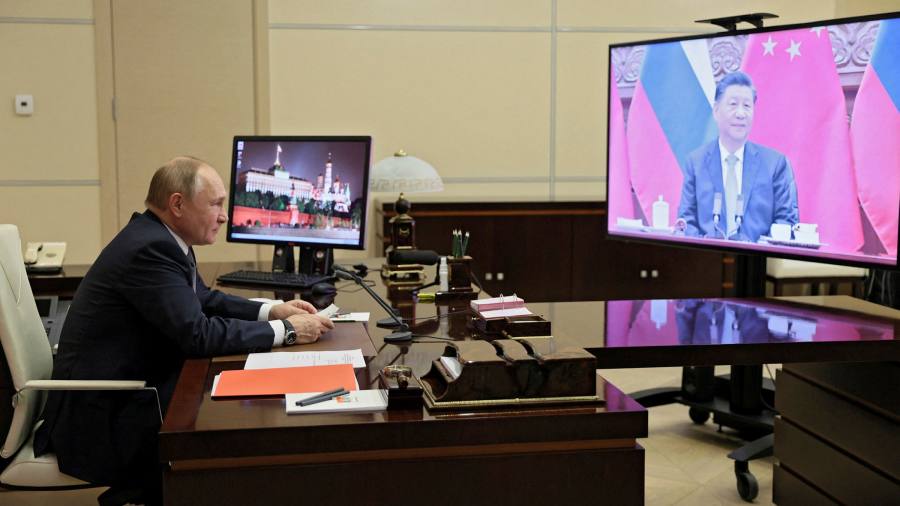 Russian President Vladimir Putin sought to present a united front with Xi Jinping as the Kremlin said the Chinese leader supported Moscow’s demand for security guarantees that would limit western influence in its backyard.

In remarks shown by Russian state television at the start of their 90-minute video call on Wednesday, Putin told his “dear friend” Xi that “a new model of co-operation between our countries has formed on principles such as non-interference in internal affairs and respecting each other’s interests”.

Xi, who called Putin an “old friend”, told him that he “highly appreciated” Russia’s “strong support of China’s efforts to protect its key international interests”, according to the official Xinhua news agency.

After Putin briefed Xi on his recent demands to redraw Europe’s security order in a call with US President Joe Biden last week, the Chinese leader “underscored that he supports Russia’s demands for such guarantees [and] understands what concerns Russia has with regard to its western borders”, Putin’s foreign policy aide Yuri Ushakov told reporters, according to Interfax.

Russia sought to portray Putin and Xi’s call, the 37th meeting between them since 2013, as a show of support at a time when both countries’ relationships with the west are deteriorating to lows not seen since the cold war more than three decades ago.

Moscow and Beijing are not formally allied but have moved closer together since 2014, when Russia annexed the Crimean peninsula from Ukraine and fuelled a slow-burning separatist war in the eastern Donbas border region.

Putin secured a major gas supply deal with China that underscored Beijing’s support for Russia in the face of US and EU sanctions over Ukraine.

After Russia deployed about 100,000 troops on the border with Ukraine this autumn, the US and EU fear Moscow could be planning to restart the conflict and have threatened crippling sanctions in response.

Putin has said the US warnings of an invasion are “alarmist” and accused Nato of inflaming tensions by supplying Ukraine’s army with advanced weaponry while conducting military drills near the Russian border.

Beijing and Washington, meanwhile, have clashed repeatedly in recent weeks over the Xi administration’s alleged human rights abuses in Xinjiang and Hong Kong, moves by the US to block Chinese companies’ access to investment capital and technology, and Joe Biden’s “Summit for Democracy” that excluded China and Russia.

The Biden administration has also announced a “diplomatic boycott” of February’s winter Olympics in Beijing — which Putin pointedly said that he would attend, marking the first in-person contact with Xi since the start of the pandemic.

“Amid growing confrontation with the west it’s important for Vladimir Putin to show that partnership with China is deepening,” said Alexander Gabuev, a senior fellow at the Carnegie Moscow Center. “This visit will be another milestone in forging the axis.”

Putin and Xi both condemned the democracy summit hosted by Biden earlier this month and said they were “worried” by new alliances aimed at countering China’s influence such as the US, UK and Australia’s Aukus security pact, Ushakov said.

Lu Xiang, an international relations expert at the Chinese Academy of Social Sciences in Beijing, said Xi and Putin needed to “co-ordinate policies in a complex international environment”.

“The US is trying to unite other nations by creating fear about China,” Lu said. “That’s going back to a cold-war mentality in the 21st century.”